I had to laugh when I saw Marksgran's comment of "and breathe" on yesterday's post! Sorry about that epic rant folks but better out than in as they say!
So where were we? Oh yes, all over France today people are protesting peacefully against the proposed pass sanitaire amongst other things. What is really interesting is that the protesters are from all walks of life and from across the political spectrum as there is pretty much rock solid opposition to what Napoleon (affectionately known as "Nappy") is trying to do! I learned last night that apparently the U.N. has already pulled ole Nappy up and reminded him that France signed the Declaration of Human Rights years ago. The E.U. has also apparently reminded him that France signed E.U. Directive No. XXXXX in January of this year to the effect that people will in no way, shape or form be pressured into accepting vaccines against their wishes, and there shall be no legal, political or workplace comeback! I'm paraphrasing of course but .... Now Napoleon is a banker (that spelling's only off by one letter!), but you'd think he might have access to a lawyer or two somewhere in the building who could have pointed all this out to him wouldn't you! Then later I heard the Senator for Haute Savoie, who has already indicated that he will vote against this draft law on Wednesday, saying that he will also not authorize police to verify people's pass status at all, so good on you Mr. Hervé!
Apparently Macron originally wanted the police to come under the "must vaccinate" umbrella also, but when they told him where to shove it they were exempted on the grounds that "they do not come into contact with vulnerable people" (that was the best they could come up with?), so now you have the incongruous situation of having firefighters and police attending the same incident where the firefighter must be vaccinated and the police officer doesn't have to be! Jen says the excuse that they "do not come into contact with vulnerable people" is complete crap because when they have a violent event in her psychiatric unit (about once a week), it's the police that come and remove the patient to secure facilities! Even more farcical, as one restaurant owner said today on TV, is that he will be put in a position of having clients in his restaurant and when the police try to come in and check their passes he will have to tell them to get out because they are not in possession of such passes themselves! It's getting less and less coherent by the minute - and is making the pompous little peacock in the Elysée Palace look more and more stupid, if that's possible! Moreover the truckers' union has warned that if this law goes through, they will be blocking roads up and down France as from 15 August, and if there's one union you don't want to piss off it's the truckers' union! And I really must point out here that people are NOT necessarily against the vaccination - they are against this pass as an infringement of their civil liberties, because once you accept losing one element of your civil rights, how long before they come chipping away at the next one? Many of the protesters are indeed vaccinated anyway. People are still working from home when they can, they are routinely wearing masks and they are social distancing, and since they have toed the line right from the start of this pandemic, they are not willing to accept further infringements of their rights under the guise of authoritarianism dressed up as necessity!
When it comes to spreading the virus, apparently, these guys aren't the problem! 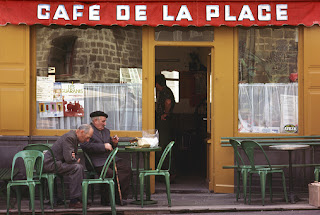