Been offline for a while!

I hadn't planned it but the other day I was feeling pretty bleh and decided that I was spending way too much time online - so I decided to take a few days' break! I tend to be on the computer more than watching the television anyway and just for a while I wanted to not think about politics, wars, covid, how long you have to isolate if you go from place A to place B, and even FB and my favourite blogs. My apologies for not commenting but I see from some blogs that I'm not the only one feeling this way at the moment. I also saw that a couple of my favourite blogs have gone private so I just wanted to say I hope you're both ok and will check in with us occasionally to let us know how you're doing. In the meantime, enjoy your privacy!

I can't say things have been bad here, it's just this constant rain and cold-ish weather that's beginning to get even me down. Today, however, was hot and sunny but with the ever present threat of rain it was muggy too - which I guess reminds me of how much I dislike summer. That being said there was the prettiest rainbow tonight as I was shutting all the windows ahead of the latest thunderstorm to head our way! 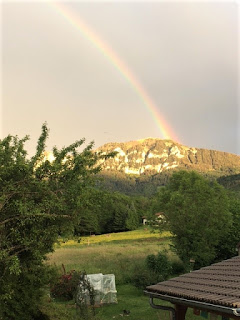 I see from the local Geneva news that there will be major renovations carried out on the Mont Blanc bridge for the next three months. It's the main bridge across the lake and while they will keep a lane open it's going to be hell for anyone trying to get to work (so what's new, right?)! Add to that Biden and Putin will be meeting in Geneva on 16 June and I'm so, so glad I don't have to try to navigate all that! Which brings to mind a story from just before my husband and I got married. He was a marine stationed at the US Mission and George Bush Sr. was coming to town as the then Vice-President. My now-ex was at my house but as it was only a short distance to the Mission from my place it was an easy walk for him to get there to assume duty. Trouble was, while he made it there in plenty of time, the gates to the Mission had already been locked and he couldn't get in! So the idiot thought it would be a good idea to go round the back of the Mission, throw his briefcase over the railings and then try to climb over - with some very twitchy-fingered Swiss police up on the roof! Thankfully for him the marine on duty recognized him and got him inside the compound, but damn, he nearly made the news that day! Can you imagine the infamy of being the marine having his picture taken hanging over the compound railings!!!! Oh and busted too! The other funny story (well not so funny for the marine concerned) was that the Gunnery Sergeant (who was a really good guy), travelled from the airport in the van that was transporting the VP's luggage, and when it was time to offload he couldn't get out!!! I have no idea what happened but he was locked in the back of the van! I don't know if they broke the lock or what in the end but he eventually did get out and the rest of the visit was "uneventful", I believe! Just as well really, I suppose!
In other news it was Mother's Day here in France on Sunday so I had the kids over for lunch (not dinner as we're still under curfew). It was very nice and I made Jen a card from Charlie and cut some roses from the garden. The next day, 31st, was Jordan's 29th birthday (he was actually born on Mother's Day), so I also made him a card and got him a bottle of good wine, but we and a few friends have all chipped together to get him new symbols for his drum set (he's the drummer in their band and he beats the hell out of them, apparently). Jen's having us over for lunch on Saturday to celebrate his birthday so I'll get to see the little 'un again then! So you see there's no reason I should have been feeling down at all, but I guess this pandemic is wearing on everyone right! Oh, and I finally checked into getting vaccinated but as I suspected I am not eligible for it in France because I'm not covered by the French sécurité sociale (the French health service), so I will have to go into Switzerland, where I am covered with my private medical insurance. As far as I can tell it'll be the Moderna shot - although I'm not really sure - and I have a first appointment in July! Now it's on to getting the nose to the grindstone and off the sofa to get a few things done around here!