Spring seems to have been cancelled due to lack of interest!

I'm not sure what happened but mother nature seems to have just skipped over spring this year and jumped straight from winter to summer! Shame really, as spring is my favourite season! I mean, we went from non-stop rain and around 15°C (59°F) to dry as a bone and 31°C (88°F) - and I'm wilting already. Well actually I'm ok as long as I stick around the house because the ground floor stays fairly cool and I can usually get a through breeze going, but of course I can't stay inside for two months can I! Thankfully my basement remains at a fairly constant temperature all year round and is a good place to store fruit and veg, either out on the work surfaces or in the fridge down there. (One thing ya gotta love about winter is you can always keep your wine cold right?)! So the other day I took the bull by the horns and finally got round to pressure-spraying my back terrace. It's a faff to set it all up but it's pretty satisfying to see all that crud coming off all the same. André works in the living room which gives on to the back terrace so I asked him if it would bother him if I ran the Kärcher and he said "as long as you're not doing it in the living room" (smart arse) and then, after I'd finished up, he had the nerve to say he couldn't see much difference! I tell ya, the urge to pressure spray his back teeth right there and then was pretty strong, so I'd say he got off lightly! Then while I was out the gardener came by and cut my grass after almost a month of non-stop rain, so all-in-all everything's looking pretty hunky dory right now!

As I finally got around to preparing Jordan's US taxes on Tuesday I called Jen to ask if I could stop over and leave them for him to sign. I have to wait until they've prepared their French taxes so I can get his final figure for 2020 and then convert it to $$$ for the US filing. What a faff that is for so little income! Still, it has to be done. Actually that's one of the reasons I gave up my green card in 1992. At the time, we were now a family of four living back in Europe, and in order for me to keep my green card I had to visit the US at least once a year. Well with two young kids and a new mortgage there was no way I could have afforded that trip every year so I handed it back. I think the rules have changed since but at least after that I never had to file US taxes again - which is good because I had a decent salary and when the dollar dropped through the floor against the Swiss franc I would definitely have owed! Anyway, Jen said she wanted to run into town to pick up a few things and did I want to come with her. Well I had forgotten how much stuff you have to lug around when you've got a baby in tow! The car seat, the stroller, the diaper bag, the spare bottles. You name it, I reckon a Himalayan expedition has got nothing on a shopping trip with a baby! That being said, Jen's very organized and he was a doll so everything worked out fine, but crikey, there's no such thing as just "nipping out to get a baguette" is there! Still, if you don't prepare you will inevitably get caught out won't you. I remember when André was first born I had a diaper bag for him but decided to leave it in the car while I nipped into the bank in D.C. I realized that was a mistake when a very kind lady pointed out that I'd got "green stuff" running all down my arm! Oh happy days!

Then on Friday I decided to sit in the garden and read for a while but André's US taxes were bugging me so I told him to give me his figures and in about 20 minutes I'd got his return prepared also, so that's a big thing knocked off the list. Just gotta get his French taxes sorted and we'll be home and dry. Oh and it's weird to think that all being well in just over a month he'll be moving into his own place! I was just saying to him the other day that this time last year he was still happily married (or so he thought), and now he's divorced, moved into France, got his residence permit sorted and is moving into his own bachelor pad in a few weeks! Stll, he's happy and I get to see both my kids more than ever before. Lucky me!

Last week Jen's grandparents made the trip down from northern France to see the baby so yesterday we all went out to lunch together on the terrace of the small restaurant near their home and it was really nice. While I can't say the lockdowns have bothered me as much as some, it was a really pleasant change to be sitting outside eating lunch again after all the restrictions and the bloody rain. Yesterday morning Jen and I decided to go to a vide-grenier (a mix of car boot/garage sale organized by the local villages) which was specifically aimed at baby stuff and where all the profits went to a foundation associated with a disease I'd never heard of, nor, I'm ashamed to say, can I remember the name now. But it was really well organized, everything was clearly priced and while the stuff wasn't maybe as cheap as you could get in a regular vide-grenier, it was still a good deal. Jen picked up a whole bunch of clothes for when Charlie is a year old (or more likely, what will fit him at around nine months), a bunch of toys and books and so on. I got a few things too and while everything appeared to be clean anyway, of course we'll both wash it all and put it away until needed. What I really wanted was a baby bouncy seat to keep at my house but I was out of luck, so tomorrow I will head out to the big charity shop near here to have a shufty, failing which I'll just go and buy a new one (but that seems a bit silly as they are in them for such a short time). The vide-grenier was in a village called Contamine-sur-Arve and boy was it pretty. I've driven through it on the main road loads of times, but higher up the mountain and back in amongst the woods were the prettiest rural hideaways you can imagine. I would have loved it years ago but I think as I get older I need to be closer to other people and the size of my house needs to decrease in inverse proportion to my age, rather than the other way around. Still, it was just lovely! 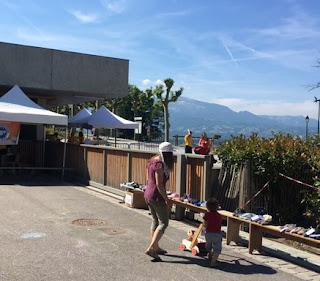 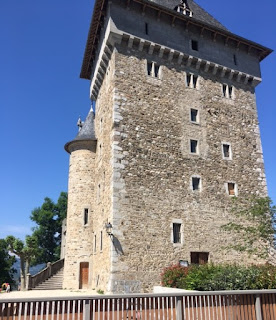 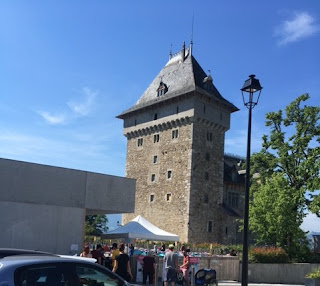 On Wednesday night I went to my first Italian lesson in over a year. and there were only two of us, so it was pretty much a private lesson. Heck, there are only four of us when we're all present so I wasn't worried about going back to "in person" classes. Then my friend came over today and we headed out to the Lac Bleu to go walking. Well that was where we intended to go but we were yacking so much I took a wrong turn and we ended up back at the lake at Thyez and walked along the river Arve into Cluses instead - which was fine in the end because I think that's really his favourite spot anyway. Stopping at Cluses we sat on a terrace and had a drink before heading back along the shaded side of the river, so all in all I got in nine miles today and about 18,000 steps total. As he was about to leave I asked him to take a picture of my feet. When he asked why I told him my yoga class starts back up again tomorrow and the first time she says "place your right hand on your left foot" I'm going to be lost because I reckon I haven't seen my feet in over a year. He just looked at me like I was mad!

And finally, since the rain has eased up my ongoing battle with the slugs devastating my "crops" seems to have abated somewhat. Thank God for that as I hate the buggers. In fact, it seems to be too hot for the snails too, so I guess I'm not the only one who doesn't like the heat. Still, if that's what it takes to get rid of the buggers I can live with it! 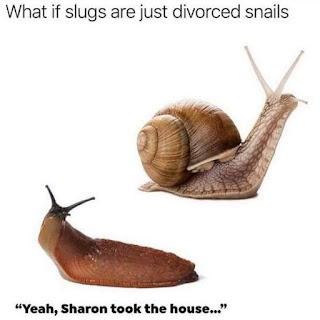