Well it looks like spring is finally poking its nose round the corner after what must be one of the wettest months of May in recent history. Not only wet, but pretty darn cold for the time of year. Not that that bothers me too much, but it's quite something that I've only just turned the heating off today and it's 26 May!!! We've had tons of rain and I reckon that must have translated into snow at the higher altitudes (along with avalanche warnings). I mean just look at the picture I took out my bedroom window this morning. Yep, that's snow on them thar hills! 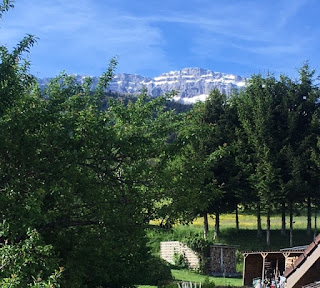 Still, as I say, it looks like we might be turning a corner here now. I heard a very loud cuckoo in the back garden this morning and had a lovely woodpecker chipping away at the plum tree this evening. So now that the good weather is on the way, André offered to take my car into town and wash it for me! Don't get me wrong, I'm in no way a slob. I wash it regularly, I actually vacuumed it last week and I never throw stuff on the floor! It's just that it would seem my rims have been bugging him for ages so he took it into town and did a pretty good job cleaning it up. What with that and the neighbour's daughter offering to do the inside for me it is positively gleaming! Anaëlle (the daughter) does a really meticulous job cleaning cars and since she wants to earn a little pocket money why not! I had to stifle a giggle though because André had cleaned his car (his pride and joy) first before taking my car into town, and when he got back a bird had left a massive "gift" on his windscreen! Man was he pissed! And then again tonight, more bird poop on the hood of his car - which was when I realized that he parks closest to the house and just under the eaves I have a bird's nest, so I guess he'll need to keep a rag and bucket handy for a while!

He went in to Geneva to stay at a friend's on Friday night and then Saturday had a birthday lunch with another friend. He hadn't planned to stay over but ended up calling me just before 9 p.m. to say he wouldn't make it home before curfew so was going to sleep over on Alexi's couch. When he got home the next day he looked rough, saying they'd stayed up half the night chatting and when he'd finally laid down to go to sleep Alexi's cat spent half the night playing with his toes like he was some kind of new toy, so he got no sleep. Not that he was too bothered though as he loves cats and wants to get at least one when he moves into his own place. He and Lily had two cats but, of course, he had to leave them behind when they divorced, so he's looking forward to getting one of his own!

My friend and I had planned to "play it by ear" (i.e. wait for the good weather) before we go out walking again, and I had asked if he would be up for trying to hike up to La Bourgeoise near Samoëns, or if he fancied catching the cable car up to the Plâteau de Beauregard near la Clusaz in order to do the three-four hour walk back down. Well I think we'd decided on la Clusaz and the cable car - and then the dreadful cable car accident happened in northern Italy, killing (I think) 14 people, with one young boy being the only survivor! I had a brief "flicker" of maybe giving the cable car a miss but I know, in reality, I would still take one tomorrow! Same as flying. I hate flying but if not flying means I can't travel to the places I want to visit, well then I'm just going to fly and deal with it - usually by imbibing the in-flight white wine and trying to sleep through it!

Off on a totally different tangent, a few months ago my neighbour mentioned the Yuka app to me, which is an app that you can use to scan the bar code on an item of food or beauty products, for instance, and it will tell you what's in it and give the item a "safety" rating. Well last week I finally cracked and went to the hairdresser's to get this mushroom cloud on the top of my head brought into submission. When I mentioned that I'd been finding my hair to be a bit oily lately she suggested a particular shampoo and it seems to be a good fit, for the moment. It's a really attractive looking shampoo, but just out of curiosity I scanned it with the Yuka app. Well, it may be pretty but it wouldn't appear to be highly rated due to its high phenoxyethanol content (you can look the "benefits" of that up on google if you're interested). So on a whim I scanned a few more items and the results were interesting, to say the least. Now I know you can't live in a sterile bubble (nor would you want to I suspect) because it would be fundamentally impossible and every time you did come into contact with something "unsuitable" you would probably have a violent reaction to it but, as I say, the results were interesting! 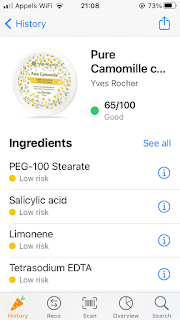 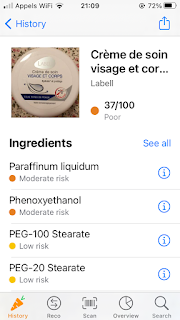 Face cream from the local supermarket -
about the same price as the Yves Rocher cream,
neither of which are expensive 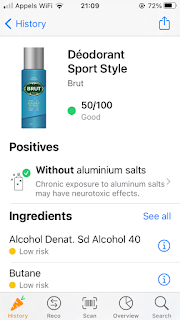 Brut deodorant
The shampoo I bought from the hairdresser!

Now that all shops are open again I went out the other day looking for a travel bed for when the Munchkin is here. In the end I bought a larger playpen which will serve as a bed for when I'm babysitting him in July. It's now set up in prime location near the stairs in the living room and my house is starting to look like a day care centre - not that I mind, of course. Heck we had Jordan's first drum set in that exact same location for goodness knows how many years, plus the high chair, plus the toy box, plus ....! Jen has a physio appointment tomorrow afternoon and asked me to go over to babysit Charlie for a few hours, so that will be nice (for me at least - I'm not sure he could care less at this point)!

And finally, I've taken a few more bags of clothes to the charity bin and started going through some very old issues of the BBC's Good Food Guide. I've been tearing out interesting recipes to try and throwing the rest of the magazine out, and the other day I found a recipe for aubergine, garlic and feta salad which was delicious (I was maybe a bit heavy-handed with the raw garlic but what the heck, it keeps the vampires away)! Then today I tried out fatoosh, which is a recipe I picked up from a Palestinian blogger and boy was it a big success with both of us. Mind you, all those fresh herbs and sumac (luckily I had some in the cupboard) are bound to be a recipe for success, right? So I've now been officially invited by André to come over and "cook in his new place any time I want"! Ah thanks babe, can't wait to take you up on that!