Well it took a little longer than usual, but Mr. Wonderful of Words With Friends fame finally showed his true colours after about four days! Yeah, hunky "Louis" with the cutey pie dog picture wanted to chat. Now when they do this (according to my own experience and confirmed by other ladies), they're either married/partnered men looking for a bit on the side or they're scammers. And would you believe it, but after "Louis" started to show his hand, "Kelvin" also showed up just dying to play WWF with me. I usually can't be arsed with these guys - in fact I never accept to play against a man now because what 32 year old Nigerian guy (seriously!) is really looking to play Word With Friends? Anyway, I took screen shots along the way, so ladies if "Louis" or "Kelvin" ever wants to play WWF with you, I'd give it a miss!

Gorgeous "Louis" (they never look like the back end of a bus do they! 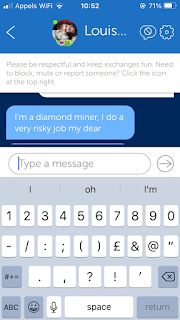 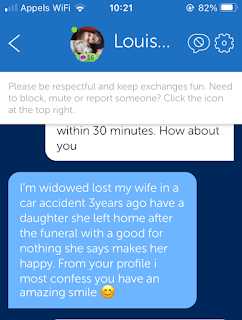 And they're always tragically widowed - with their bratty kids being off their hands. At this point I told André I was surprised he wasn't US military (I'm giving André a running commentary and we're cracking up)! 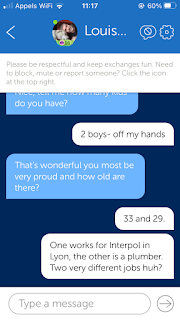 When he asked about my kids I told them one worked for Interpol - just to see if it would shake him up a bit. Thing is, it would be perfectly possible for my son to work for Interpol as Lyon's within easy commuting distance from here. These guys usually have several scams running at once so they don't actually read most of what you've written, so nope, Interpol didn't seem to phase him! 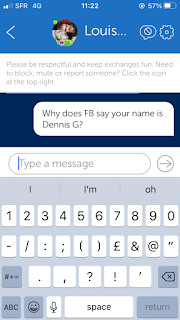 When I asked "Louis" why he was showing up as "Dennis G" on my phone when he sent me a message he said he didn't know - but he quickly corrected his settings to show up as "Louis" again! 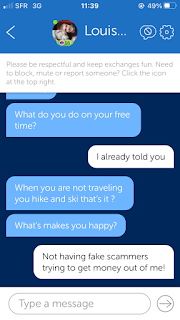 By this time he had asked me for a photo so he could "see what I looked like", despite already telling me I had a "smile that could light up the world". I was getting a bit fed up by this time so just pulled the plug and blocked him!

Enter "Kelvin", who's a "military doctor currently on contract with Nato" - in Afghanistan (oh bless his heart)! 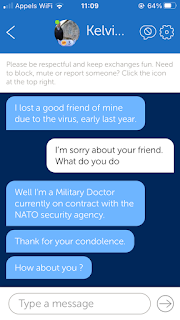 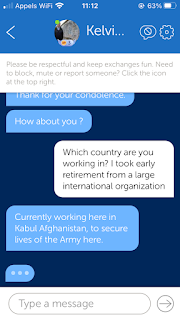 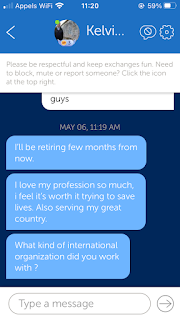 And of course he'll soon be retiring (so free to travel and meet up with little ol' me, who he has already fallen madly in love with, ya see)! I told him I was retired from the UN (not true), which was great as their pensions are pretty generous! So then the eejit asks me what "my organization" does (told ya, they don't read everything because they've got several scams going on at the same time)! 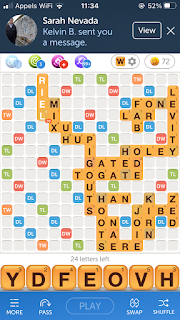 So then I asked "Kelvin" why he was showing up as "Sarah Nevada" on my phone. "Sarah Nevada" - ha ha, that's not even clever, but I guess that's the name he uses when he's trying to scam/catfish a man!
At this point I'd pretty much worn my "typing finger" down with these two and at some point I really needed to get in the shower so I just told him I knew what he was up to and basically to f.... off! Still, my car's in the garage, it's raining and I have nothing better to do. Well, that's not strictly true, I have tons of things I could be doing but .... it was fun for a while and André and I have really had a blast drafting messages to these two! So happy days then - I'm off to get in the shower! 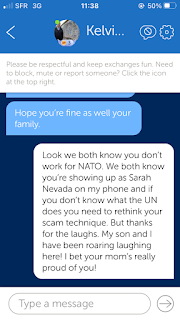