The road not taken!

My ex and I can still see each other's FB posts but to be honest neither of us post that much. It's just a way, for me at least, to keep in touch with friends and family. I post once in a while - just things that interest me or maybe shots of the kids so that my family can see what's going on in our lives. He tends not to post for a while and then maybe 3-4 posts in one night. And sometimes I just shake my head at what he posts! Not so long ago he did the "ooo-raa marine corps" thing praising a bunch of female US soldiers. Trouble was, even I could see that they weren't American soldiers - they were Israelis. There's no way the US would have allowed the pony tails and scruffy appearance on these ladies (who were probably doing their military service), and somebody pointed that out to him. Then yesterday he posted another "drively" post about 18 year olds - then and now. Then (during WWII) 18 year olds (and younger) went off to war. Now 18 year olds - the snowflake generation (dixit my ex) - would always seem to be mortally wounded if someone stares at them the wrong way. So the post said something like "During WWII this 18 year old would have landed at Normandy, while today's 18 year old will probably have a nervous breakdown if his iphone won't work". Not totally word-for-word but you get the gist of it. I had to laugh when someone commented on his post saying that he doubted very much that the then 18 year old ever saw Normandy because it was a Russian soldier!!! Oh dear, I do wish he wouldn't post such drivel - or at least think about it beforehand! Still, it's not my problem if he looks a fool is it. I also hate the FB posts where people post something "sensitive" and then say "share if you dare" or "I bet you won't share this". Well they got that right because I never share those posts. Like how we're supposedly no longer allowed to say "merry Christmas" but will be obliged to say "happy holidays" in future. It's all a bunch of crap but so many people quote this stuff as if it's the Bible! I remember reading once about how the EU had supposedly invoked health and safety concerns in order to oblige "all trapeze artists to wear a crash helmet", by law. It was all a crock of ... made up by a bunch of drunken journalists in a bar in Brussels! Moral of this story? Don't believe, or better yet, don't repost all the crap you read on FB!
Anyway, on to other things. Despite my best intentions I yet again did not get up at the crack of dawn to go walking (no surprise there then). On Sunday the kids went to a place called the lac de Passy, which is probably 20-30 minutes down the road from Jordan and Jen. It's really lovely apparently and since I reckon I've never been there I decided that would be the destination for my walk today. Trouble is, I must have typed too many "ass"es into my GPS so instead of ending up at the lac de Passy I ended up at the Plâteau d'Assy! Nothing seriously wrong with that but it really wasn't where I was heading. If memory serves me right I last went up to the Plâteau d'Assy about 10 years ago in my camper van. My ex took our camper in the divorce (I got the kids) and so I bought myself a second-hand one for my own use. It ended up being a waste of money actually because my heart was no longer in it and in any case going camping on my own wasn't really my idea of fun. Nevertheless I did spend a couple of nights up at the plâteau and it was just fabulous to wake up to such a wonderful view, even if I had no-one to share it with! From there you get a full on view of the Mont Blanc and it is just breath taking!
I had packed a small backpack with water, sunscreen and so on but when I got out the car I realized that I had once again left my hiking boots by the front door! Bloody hell! Here I was all ready to go and all I had on my feet was a pair of flipflops! So what do you do? I knew that there was a pretty little lake just a little further down the road so I figured I'd take the risk of looking like a tourist and toddle down there for a stroll, but sticking to the roads as I didn't dare risk my flipflops on the proper hiking trail. It was actually pretty busy down at the lake oddly enough, but with most of the cars being registered out of state!

As it had been threatening storms all afternoon I decided I had better head back up to the plâteau and oddly enough I found it easier going back uphill than going downhill - my footwear might have had something to do with that! Again, as usual, the first 10 minutes are hard and then I get into the swing of it - I just wish I didn't go quite so puce in the face though. You know how people with fair skin get that bright red thing going, well what with that and the sweat pouring off me I had the look of an electrified tomato by the time I got to the top, despite not feeling bad at all! I just looked like I was going to have a coronary! 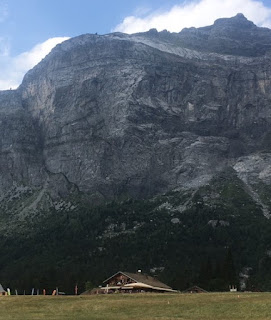 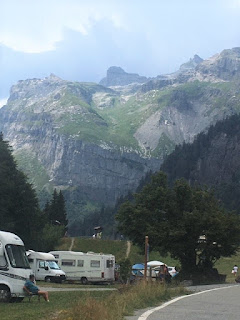 When I was almost at the top I noticed this car with Dutch licence plates. I'd noticed the "tent on top of the car" on the way down but on the way back I realized that there really was a fully set up tent on the roof of the car with a ladder leading to the top for them to climb in! I say "them" but in fact it turned out to be just one Dutch lady (as I deduced by the fact that there was only one bike and one bike rack) so she must have been travelling around on her own. I don't know if I'd ever be mad enough to do something like that (I like to think I would), but hats off to her anyway. Then I had all the "where does she wash if she isn't in a camp site" thing going on, but I'm sure she's got all that covered - the Dutch usually do!

Anyway, as a reward for my endeavours I sat and had a glass of wine while admiring the view and reading my book. A French lady about the same age as me, or maybe a little younger, sat at the table next to me and also had a glass of wine while reading her book. Sadly that's where the similarities ended because she had all the right hiking gear (anti-sweat, anti-rain, anti-just about everything), she wasn't puce in the face and her hair just looked "casually windswept"! I said au revoir to her as I got up to leave, desperately hoping she wouldn't notice my sweaty back and that my flipflops wouldn't make the same farting noise they'd made all the way back up the road! No such luck! God, sometimes I hate the French! 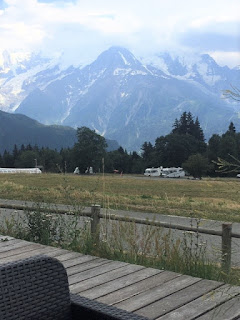