I went shopping on Thursday and decided to go to LIDL for a change as I hadn't been for ages. Crikey is it cheaper than where I normally go! I can't get everything I want there of course but it's definitely worth stopping in first I think, especially as I'm now picking up stuff for André every week too as well as the food bank. During lockdown I noticed seedless grapes were up to €5.50/500g as opposed to €4/500g previously, so I left those well alone - I don't want grapes that much. Now I see they're back down to €3.50/500g and so are back on the menu, but I have to say that even taking into account seasonal variations, prices have been all over the shop!
On Friday night we had our annual AGM of the homeowners' association in the middle of the island in front of our houses. The President and the Secretary (Philippe and Pierre) are a bit like Cheech and Chong and basically said they hadn't got anything to talk about but since we had to have a meeting at least once a year would now be a good time to get the wine out? And of course it was! Somehow I ended up volunteering to become Treasurer as the previous lady has moved, but since that seemingly involves writing maybe one cheque a year I don't think I'll be too stressed - and of course it shows willing doesn't it!
I had a good long chat with a neighbour I don't really have much to do with and he was telling me what he is going through with his wife. She's pretty much housebound and totally dependent on him for everything. It sounds suspiciously like Alzheimer's but he says it's not that, even though she has many of the same symptoms - no recent or even older memories, doesn't recognize her children and keeps expecting her mom to walk in any time now (mom's been dead for many years). As I say, I really don't know this chap very well but my admiration for him and for what he does for his wife just keeps growing! 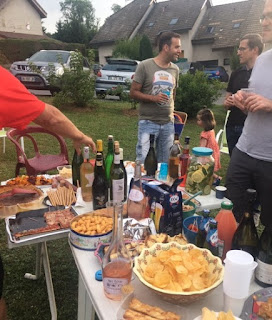 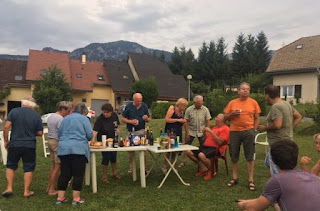 On Saturday André met me at the bank so that we could get his French account re-activated and start the ball rolling on getting his car imported and insured in France. He only worked a few months in France before leaving to join Lily in Korea and then finally moving into Switzerland with her, so he doesn't have much of a "track record" in France. Well actually that's not true. He left his motorbike insured in France and then stopped putting any money into that account so more than once I got a phone call from the bank looking for him because he was overdrawn!!! In the end I think they got fed up of him and cancelled his bank card. I told him he was a bloody idiot because if he transferred just SF 100 per month into France he would always be covered and he wouldn't miss such a small amount of money anyway. Eventually I guess I got through to him that that was the way to go as I reckon he stopped overdrawing that account about eight years ago - thankfully right? Anyway, he's now set up with an active bank account and new card, and we've been through his finances together and he has a good idea of where he stands financially. He won't be buying anywhere for at least a year I reckon but that at least gives him time to save some money and get a feel for where he wants to live!
After the bank we met up with Jordan and Jen in town for lunch. It's a relatively new restaurant with excellent food and I have to admit I'm thoroughly enjoying seeing more of them all. While we were chatting I remarked on a scar André has just above his right eye and he was recounting for Jen the story of when he was in a car wreck in Verbier when he was 18. I've mentioned before that my kids went to an international school because I was lucky enough to receive a grant from my employer to cover some of the cost. Even with the grant it was extremely expensive but since we wanted our kids educated in English that was the only solution. Now the kids at these schools were either kids like mine - with parents receiving a grant - or kids from very wealthy families. Rich Russians and Arabs for the most part while my kids were there. And I have to say that while these kids lived on a whole other planet to us many of them were pretty nice - surprisingly so, in fact. Anyway, one of the mothers rented an apartment in the ski resort of Verbier for six of them (God knows how much that cost) and the lads were pretty good about moving everything that could be broken into cupboards so that they didn't damage stuff. Anyway, one night André and a friend had walked down to a nightclub and on the way back one of their rich friends passed them in some swanky Audi something-or-other and offered them a lift home. Trouble is, D (the friend) had actually taken the car keys out of the kitchen of his friend, R's, home and it was R's mother's car that he had effectively stolen (although André didn't know this of course). Anyway, I'm sure you can imagine what came next. He was showing off, hit a patch of black ice and rolled the car down an embankment. André was in the back and actually ejected from the car. He came to with blood streaming from his head and no shoes on. The other lads were able to climb out and believe it or not they all managed to limp back to the apartment. André was bleeding so badly though that they had to take him to hospital, from where I got a phone call at 4 a.m. asking me to guarantee his bill!!!! He was covered of course but he told me he had fallen and to cover for D they said they had gotten into a fight over a girl. Next morning there was a hammering on the door when the police showed up and D was marched off to the police station. The car was wrecked and D ended up with a SF120,000 ($120,000) bill to replace it, plus an SF 80,000 fine. And he (or more likely his parents) paid it! Thankfully, apart from being injured, André had nothing to do with it and actually got a letter from the courts in Switzerland asking if he wanted to press charges against D - which he didn't!
Another time I was chatting with a friend at work and he was telling me about the time his daughter was invited to spend a week in Paris with her friend's parents and when he started asking about what she should pack and pocket money and so on his daughter mentioned they were "staying in a place called the Georges V - or something like that"! Only one of the most expensive hotels in Paris!

Ha, when we took our kids' mates on holiday with us we went camping! Not that I care. I kinda think being filthy rich is pretty sad because I'm not sure they actually appreciate anything and I certainly don't envy them, but I would say, again, that some of these kids were pretty nice and my sons have stayed friends with quite a few of them, although in all honesty their mates are now mainly in France and more "normal"!
I love reading "social commentary" books - I've read Nickel and Dimed, Around About A Pound A Week and so on, and I'm currently about half way through Affluenza at the moment. Not to oversimplify (or maybe yes, I am oversimplifying) but Affluenza seems to shine a light on how people's never-ending consumerism pushes them to have to work harder and longer to pay for it all and yet their happiness seems to be in inverse proportion to the amount of "stuff" they manage to acquire. It's very interesting to me as I feel our throwaway society and its inequalities are just so wrong - but I don't know what the solution is. Obviously we all enjoy certain comforts and everyone has their own idea of what that comfort looks like, but I'm more and more convinced that acquiring "stuff" doesn't bring happiness. Quite the opposite in fact, we just seem to want more and more and then have to work longer and longer to pay for it. At least that's my take on the book so far. In the end, if we have everything we need and most of what we want are we not truly rich?
And finally, I just wanted to send huge hugs to our blogging friend in Canada after learning her shocking medical news today. Hang in here hon, your blogging buddies are sending you so many positive vibes. You've got this!
Posted by Treaders at 20:37