My first time at a "desalp"!

So yesterday I got up at stupid o'clock to meet my friend for our trip up to Gruyères to see our first "désalp". The "désalp" is when the cattle are brought down from the higher pastures for the winter, although I always knew it as "la transhumance", but whatever! I'd never been to one anyway so it was another first for me. We booked this trip with the bus company that we did our trip to Cinque Terre with as they were so well organized, although I'm not really sure why we treked almost three hours into Switzerland when they do the désalp around here too! Oh well, no matter I guess. Moreover, my friend very kindly paid for my ticket as a birthday present - I kept asking her when she thought we should go and pay for our tickets and she said she had called them and they had said we could pay on the bus - not true - she had already been and paid a couple of weeks ago! Very nice huh!

Our route took us through Geneva and along the northern bank of Lake Geneva, which is just stunning. As you get towards Vevey, which is just 10 minutes from Montreux (think Montreux Jazz Festival), the motorway starts to climb and the view over the lake and the mountains is so beautiful. At that point I guess we had been on the road a couple of hours so the bus pulled off and the drivers (there were three buses) laid out the picnic that they always bring for the passengers on these trips - bread, various cheeses, ham, salami, cake etc. and tea, coffee, water and red wine! I know! Much as I like a drink I couldn't drink red wine at 9 a.m. (or at any time really as I don't actually like red wine - give me white any day)! The drivers obviously didn't drink but there were a few people partaking - still, I guess since most of us had been up since around 5 a.m. it could technically be classed as lunchtime. Or, as the saying goes, the sun is always over the yardarm somewhere isn't it! Still it was a wise move as Switzerland is anything but cheap and that particular service station, while spotlessly clean and serving very good food, is particularly expensive!

We made it to the village of Charmey at bang on 10 o'clock and only had to wait a few minutes for the first cattle to come through. This being Switzerland it was very well organized - and somehow they even managed to have the sun shine all day when it had actually forecast rain! I guess a herd was driven through the village about every 30 minutes or so, so we had plenty of time to wander around the cute little back streets in between times. It was, however, pretty crowded, and quite an effort to get from A to B in good order. They had all kinds of market stalls and food and drinks tents on the go all day. There were also various brass bands playing at different times which were very good - but my absolute favourite part was hearing the alpine horns in the distance!!! I wasn't quick enough to get over to film them but their sound is just beautiful! They used to be used to call the cattle in from the pastures at milking time, but that has obviously fallen by the wayside nowadays, which is such a shame as their sound is just beautiful! 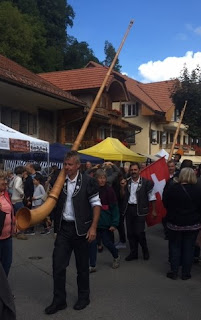 I also saw this cute little plant holder which I thought about going back to buy (I didn't want to carry it round with me all day) but never made it back to the stall in time! Shame, as I think it's really sweet! 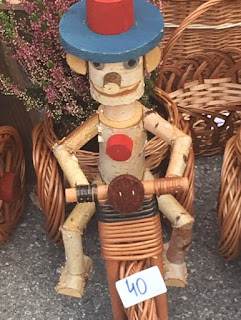 Each herd was driven through the village by its owners, who were all dressed in traditional costume. The cattle were also all decked out in their Sunday best, with huge cowbells and beautiful flower headdresses. Now while this all looks lovely, a friend who did a désalp last year to help a neighbour out was telling us what hard work it was - walking through the mountains for hours at a time, then sleeping overnight in a tent and continuing the next day until all the cattle were brought down. She said it wasn't for the faint of heart - as was proved when a few people called it quits after the first day! We calculated that all in all they must have driven over 1,000 head of cattle through the village that day! 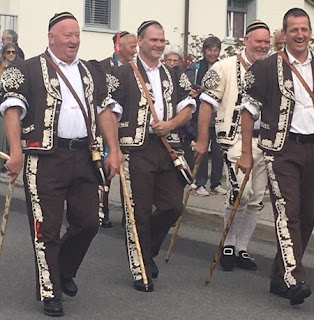 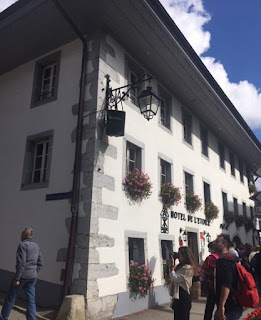 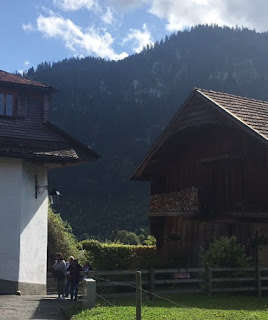 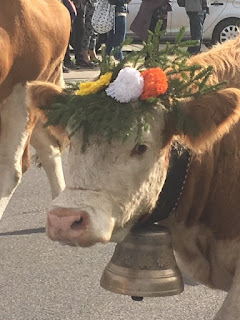 What neither of us realized was that there was to be no trip to the village of Gruyères (where they make the cheese), which we felt was a shame as it is a lovely little village and definitely worth a visit - as are the cheese factory and the Cailler chocolate factory. It didn't bother us much as we had both lived in Switzerland (me for six years) and had been to Gruyères many times, but I think some people were disappointed, and given that it was only 10 minutes away and we had all day, we think it should have been on the programme. We mentioned this to our driver at the end of our trip and he said that this was their first time at the désalp but they would definitely rethink their programme next time

Since we had plenty of time to kill we treated ourselves to a rather long lunch of fillet of perch (a local speciality), followed by meringues with Gruyère cream - again, another local speciality! Talk about the diet being blown to smithereens yesterday! 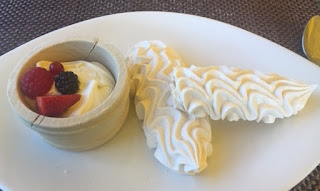 Thanks to making good time and no accidents we got back around 8 p.m. - so all in all it was a lovely way to spend a day out!

In other news, my neighbour got back to me to say that apparently our team came in 10th out of between 150-200 teams (there were 806 participants so I'm not sure how many teams that meant) at last weekend's whodunnit (no thanks to me), so I was dead impressed!

And tomorrow sees my sewing club starting up again for the year, so what with my other classes my weeks are going to be pretty full from now on. I did see the following on Facebook this morning though, that kinda tickled me: "A yoga retreat" - translation - "an expensive stretching holiday"!

And finally, I don't know if this has ever happened to you, but a couple of people sent me a "friend" request on Facebook recently. One person I knew so just hit "accept" and I must have accidentally hit "accept" for the other lady. Only problem is, I have no idea who she is! She "likes" pictures I post and so on, and I've looked at her profile to see if we have any mutual friends but nope - like I say, I have no idea who she is! Oh well, maybe that mystery will clear itself up one day - or then again, maybe it won't and I shall forever be none the wiser!