On Saturday I stopped in at Jordan and Jen's to take something over that Jen had asked for. She had not been well (spent the night in hospital) so I wanted to see how she was doing. Initially they suspected appendicitis but that turned out not to be the case, although they found massive internal inflammation instead. Hopefully with a bit of treatment, rest and some TLC she will be feeling better soon! Anyway, I was telling Jen that I wanted to get one hike in, either up Le Môle or up to Balme while the weather was so perfect. But she told me that she had recently taken her patients on a hike up to a place called La Bourgeoise, which was a pretty easy hike but with the most spectacular views! So I decided to take a trip out there on Sunday just to see what it looked like. First I stopped in at a local vide-grenier which was much bigger than I expected and very well organized. I didn't buy anything though as nothing really caught my eye, but it was still nice to be out and about anyway. And then I set out to find La Bourgeoise. It was about an hour from home and just over 50 km and what a lovely spot it turned out to be! I drove up to the top of the pass to a small café which is the starting point for the hike. Since, by this time, it was already 5 p.m. I decided not to go up to the look-out but that I would come back "some time soon". So I sat and had a Perrier water while taking in the sunshine and the beautiful view (all the while trying desperately to look like I'd just done a gruelling hike - but nah, that didn't work). Behind me was a large party having a drink and as they got up to go someone called out "grandma, you forgot your walking stick". I was just thinking how sweet it was that they took "little ol' grandma" up the mountains for a day out, when I turned round and 70+ year old grandma" came striding back to the table all shorts, thigh muscles and hiking boots, picked up her hiking stick and then ran back off to join the rest of her group! That'll teach me about stereotypes I guess, especially around here!

Anyway, yesterday morning I had my early morning yoga class in the next village, and I've come to realize that doing that first thing, right at the beginning of the week, is a wonderful way to set up my week. As so often with yoga, I've found that it doesn't really feel like I'm actually doing anything, but when I leave I feel absolutely wonderful! I love it! So on the way back I was telling my friend about La Bourgeoise and when she said "let's give it a shot", I suggested "how about this afternoon" so off we went. And my was it ever pretty!

The walk to the top was pretty easy actually, although I agree with my friend that it's still probably better to do these hikes with someone as it would have been easy enough to twist an ankle in some of the more treacherous spots. We came across sheep and cows (and a few goats), all with their bells on, and it was just glorious. Most people do this hike in about an hour or less - we took an hour but were fine with that as neither of us like to rush and it was pretty hot to boot! 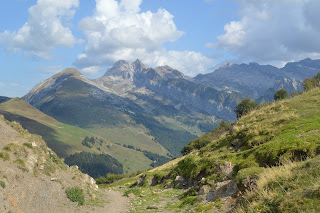 And then didn't we just totally luck out when a group of men came up behind us and were setting up for hang-gliding lessons - and we had an eagle's eye view!

My friend and I were talking about how strong the instructor must be because with a novice they have to be prepared to take the weight of the student, if necessary, when they come back in to land. So my friend was saying she'd need knee pads and shoulder pads (and here's me thinking incontinence pads would be more likely to be on my list of essentials)! Still, it was such a thrill to see them up close in action!

And in other news, seems my scammers are back. There were two yesterday and one of them, a widow, formerly married to General Somebody-or-other in the Congo, apparently wants to marry me!!! Now I must definitely be giving off the wrong vibe - not in the sense that I'm a "woman looking for another woman", but anybody who knows me knows darn well that if they think I am ever getting married again they want their head looking at! But thanks for the offer anyway!

Then last Friday the Swiss/French emergency services carried out a simulation of a "catastrophic" event in one of the tunnels of the new CEVA train line, which will begin running mid-December. The CEVA, or the Léman Express (lake Geneva is called lac Léman in French) will eventually link Geneva airport all the way through to Chamonix/Mont Blanc because skiing, in particular, is very big money around here. In December, however, the section of the line linking Annecy to Geneva (the section that would have benefitted me had I still been at work) will be opening up so they simulated an "incident" (crash/bomb) inside one of the tunnels with 2,000 "victims" and around 900 emergency service personnel/first responders to see how they would cope in such an event. I'm told it went pretty well, but of course the upshot of that, very necessary, exercise is that roads were closed for hours, although they had forewarned people via the press. Unfortunately, on top of that, there was what I understand was a relatively minor three-car smash on the motorway leading to France, but which involved having to close off more roads so that the emergency services could get in! And again, I can only say that I'm just so, so glad that I don't have to do that commute any more!

And I saw in the newspapers this morning how an elderly cyclist in Australia had died falling off his bike after being "attacked" by magpies! How very sad! But I remember being in Australia in 1983 (my six-month "round Australia" trip) and at one youth hostel in Queensland they had put up signs advising us to "beware of the thieving magpies". Well we just thought it was to warn us to keep an eye on our valuables, but no, it was, indeed, to watch out for the bloody magpies who swooped and basically attacked pedestrians as they were walking down the street. It was quite amazing really! 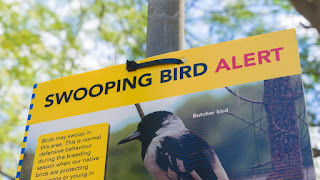 And finally, I got a call from Max last night to say they would be here tomorrow morning to finish hooking up my heating/hot water system, so I'll finally be able to get my house looking somewhat less like the site of a nuclear "incident"! I also got a call from Patrick, the "official" French translator, to meet him for a drink tomorrow afternoon so I can drop off my parents' death certificates for him to translate in connection with my request for French citizenship. Now I'm not totally convinced I need their death certificates but since it only costs 30 cents a word to get them translated I may as well just go ahead and have everything ready for if and when I ever get my initial appointment with French immigration (don't hold your breath)! So on that note I will love you and leave you as I have my second yoga class of the week a little later this afternoon and I'm sure the ladies would probably appreciate it if I had a shower first!
Posted by Treaders at 12:31