Think I've finally got it figured!

That is, how to put my own videos on my blog! Only took four years but then I guess I'm slow! It was driving me nuts that I could put other videos on my blog but not my own - I couldn't even take them off Facebook, but it looks like this is working! Hallelujah!

Anyway, back to the plot. The day after my family arrived for the wedding I dropped my sister, brother and brother-in-law in town and picked up my nephew and his partner to take them out to pick up their rental car. While I could get everyone a bed of sorts in my home I couldn't get everyone in my car to go sight-seeing so D and L rented a small car. Trouble is when they say "small" in Europe they mean small - so they ended up getting a dinky little Fiat 500 - which I reckon has a slightly less powerful motor than my sewing machine, but hey, they weren't complaining! I did wonder how they would follow me up some of those mountain passes but believe it or not they made it, even if they had to take it very slowly!

Since we effectively only had the afternoon that day to do touristy stuff I thought I would take them up to the Plâteau d'Agy, which is only about 30 minutes from here and an easy climb for the Fiat! This is the place I had been with my friend and forgot my hiking boots so ended up looking like a right dillon trecking up there in my flip-flops! Had to give up in the end when my flip-flops broke!

When we got to the plateau we decided to have lunch in the lovely little restaurant there which turned out to be really good! After that we set off for a short walk part-way up the mountain to check out how far it was to the top. Turns out it would be around two hours all the way up so we decided to give it a miss as it was getting late, but again, what a pretty spot it is; I don't think I will ever get tired of the sound of cowbells! In fact, my friend mentioned today that we should give it a shot this weekend and go back up there for a hike. As long as the weather isn't too hot I'm up for it! 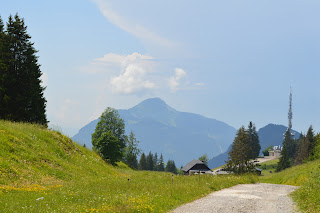 Since we were part way there we decided to stop for a coffee at the horseshoe gorge ("Fer à Cheval" in French). I had already taken my family there in the past but, again, it's a place that never gets old! 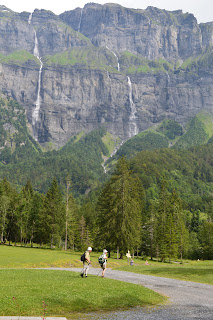 After that it was back home for dinner (which luckily made it through the power outage debacle) and a relatively early night for my family ahead of the wedding the next day - not me though, I never go to bed much before midnight/one o'clock and this was no different - I won't go to sleep anyway so there doesn't seem much point in going earlier. I still made it out of bed by seven though!

On a totally different note, I have slowly been putting together my paperwork to request French citizenship. When I look online it would seem that I have to go through the Préfecture (local authority) in Grenoble, but there was also a note on their website which said that I had to go through Annecy! So I contacted both and asked which was it. Turns out I have to go to Annecy first so that they can make sure my paperwork is in order and then Grenoble will give me an appointment "at some point". But get this, the waiting time just for an appointment in Annecy is minimum 12 months! Holy cr*p! Thank God I have a sense of humour eh!