The day after the wedding, "groggy but unbowed from so little sleep", we set off to visit the Plâteau de Glières, site of a remarkable and courageous battle between the occupying Germans and the French resistance in March 1944. France was occupied during the war, of course, but many interior areas of France were left "unoccupied" by German troops, to be "governed" by the local French administrations. This region of Haute Savoie was not so lucky, given its proximity to neutral Switzerland, and so suffered more than many other regions during the war. My nephew particularly wanted to visit this site so off we went, up a mountain road which, in places, was little more than a goat track! I seriously wonder how my nephew's rented Fiat 500 made it up there, to be honest, but made it we did! I won't go into the whole story of the battle at Glières, except to say that fewer than 200 maquisard (resistance fighters) took on 2,000 German soldiers up at the plâteau. The British parachuted supplies in to the resistance and it was fascinating to see the metal cylinders that they used to get the arms on to the mountainside! As I said, I won't try to tell the entire story, except to say that although the maquisard were ultimately defeated, this defeat would be transformed into a moral victory, giving a much-needed boost to the French resistance. If you want to read more about it you can do so here: 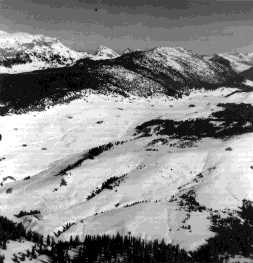 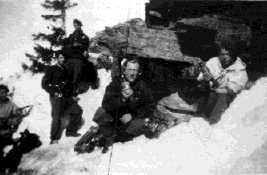 Fittingly, the plâteau has not been turned into a tourist trap - no cafés, no nothing, except a museum, and a couple of places where you can sit and picnic as it is pretty well frequented by hikers and history buffs alike! But get this! I had somewhat "over-cooked" the previous couple of days so we just threw all our leftovers into a cooler and took that with us for lunch. When I have a few people over, rather than setting the table, I just put out a very pretty ceramic jug with all the cutlery in it, so I took this as well. And you know how when you are out "slumming it" with your supermarket sandwich where the corners of the bread are all turned up and the people next to you pull out a three-course picnic? Well that was us!! Tee hee! Seriously, when the people at the next table saw us get out the pretty cutlery jar they must have wondered where the chandelier and the wine-waiter were!! Doesn't happen very often but it did feel pretty good, I can tell you! 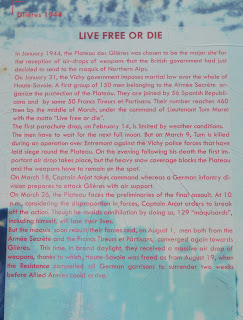 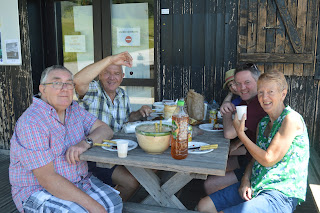 After lunch we headed back towards Annecy to visit the Jardins Secrets that I had visited with my friend last year. I have to say the menfolk were probably less enthralled than we women and to be honest the gardens were probably not as pretty as last time - different season I guess. Plus it was incredibly hot so while we enjoyed it we didn't stay much longer than hour as we just had to get out of the heat! 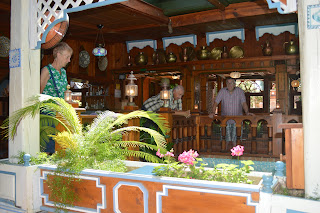 That evening we were invited to Jen's mom's house to have dinner with her grandparents and a few friends. It was somewhat awkward since only Jordan and I spoke both languages so we were seated in the middle of the table to do running commentaries. Still, it was a nice evening, even if the conversation didn't exactly "flow"!

Which puts me in mind of my sister's wedding many years ago when my mom and dad "dropped me in it". My sister married a Dane and his parents came over to England for the wedding. Now I know we assume that all Danes speak English - which is probably true of the younger generation - but neither of his parents spoke a word of it! So my mom, using logical thinking, landed me with accompanying them around when the bride and groom left because "you speak French"! Yeah mom - that makes a lot of sense! Still, they were sweet and we got through it in the end!

And on a totally different note, the other day I went to the market and since our town's market is one of the larger local markets, they always have one of those, what I call "everything for €1 stalls". Well, technically everything isn't priced at €1 but you can certainly pick up some good bargains. Anyway, I spotted a garlic press in what seemed to be the €1 bucket and it had the "cherry stoner" bit that I wanted too. I had broken mine ages ago so at €1 it was a bargain. But when I went to pay the guy he said "that'll be €6"! When I queried it he said that it was, indeed, €6, but he had an identical one at €1 in another bin. When I asked why the difference in price he said that the €1 press had been made in China and the €6 press in Europe so which did I want? Bugger it, I'll take the Chinese one - and seriously, they appeared to be identical!

Anyway, that wasn't the dilemma I was referring to in the heading to this post! The other night I was looking up the courses at the MJC (the local community centre) and see that enrolments take place on 7 September. I have seen a beginners pilates class on a Monday (same day as my sewing club, but there is no clash) and they have a "pilates+gentle gym" class on a Thursday, specifically aimed at exercises for your back. Now I don't have a bad back (and long may it last) but I am always up for any form of exercise that keeps it that way. So, my dilemma is, do I sign up for both of the classes, seeing as I already have my wonderful yoga lesson on a Tuesday and my commitment to going to my work's gym on a Wednesday? That would be four classes in one week! Do I actually have the staying power to commit to all these classes? I'm a Libran so you can only imagine my anguish! What to do? What to do? I know, I'll toss a coin! There you go - sorted! I'll sign up for both!