If I had been returning to work, today would have been my first day back. Just as well I wasn't then eh because when I went out this morning to get into my car the battery didn't even attempt a splutter. It was so stone cold dead I think rigor mortis had already set in! Bloody hell, can you imagine, first day back and I have to call my boss and say "you'll never believe what's happened now"! I was routinely late most days due to traffic, and no, you could never get ahead of it by leaving 30 minutes earlier and 30 minutes earlier again - the traffic was always bloody atrocious! We had flexible-ish hours, thank God, but I just never made it in at the time I was aiming for. Don't get me wrong, I never minded staying later if necessary either because it's swings and round abouts isn't it, but when my bloody car wouldn't start this morning I could have cried. It had only been one day where I hadn't driven it so as far as I was concerned it should have been ok but there was nothing doing. My neighbour saw me getting out my charger and hooking it up to the electric but two hours later it hadn't moved. In the meantime he went and got his charger to see if that made any difference but no doing! Then he managed to drive up on my front garden to get level with my car and we tried jumping it but nope, still no doing!

Thankfully I am a member of the Touring Club Suisse (like the British RAC or the American AAA) and always have been. Thankfully, also, I always keep my subscription up-to-date and had recently renewed it effective 1 January - only to need to use it on 2 January! So I called the TCS and explained to the lady that I would need a tow truck but not necessarily this evening as my car was in my driveway and I wasn't going anywhere. She said somebody would call me within 10 minutes so I waited and waited and at about 30 minutes I wondered what was happening - when just then there was a knock at the door and there was my knight in shining armour with his trusty tow truck! It took him all of about 10 minutes to jump my battery with his powerful truck-grade battery - phew, that was a relief. You know how your mind immediately goes "oh bugger, I'm going to need a new car and I've just left a good job" (or is that just me?) but once I get my thoughts together I know I can sort everything out - I just didn't particularly want to sort it out tonight in the freezing cold. In the meantime, I had been calling Ford repeatedly and their answering machine kept telling me that all their lines were busy. In the end, knowing their small garage well, I figured they were still on Christmas vacation and hadn't gotten round to changing their answering machine message, which turned out to be correct, as later confirmed by the tow truck driver. That being the case, I then called a local franchise garage, Norauto, who were open and dashed down there with just one hour to spare before closing time. They were brilliant, got my car in and the battery changed all within the space of 40 minutes and with a smile too - that's not something you get every day! But credit where credit is due, I posted my thanks on the FB page of both the TCS and Norauto giving credit for their efficiency!

I did have plans to drop in at work today to exchange my badge for a retiree badge, pay for next year's subscription to the work's gym and then head off out to the computer shop to buy a cable I needed before meeting my friend to go and see Bohemian Rhapsody! As you can imagine that all went tits up (forgive my French) but at least my car is sorted!

And then this evening on my FB feed someone had posted the following photo of an accident on the motorway where I would have needed to pass on my way home. So first day back and I would have been stuck in another accident! Damn, the relief that I am retired is tangible! 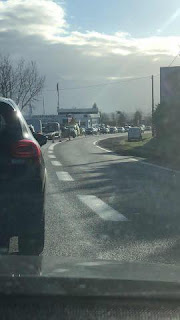