I've been in North Wales (Conwy specifically) since last Tuesday when I flew out to see my brother, who has been hospitalized since around 27 December. He was diagnosed with terminal cancer of the stomach so I knew I had to get here quickly. What a shock that was as he only fell ill about six weeks ago! Anyway, I have been to see him and will (possibly) post more about him in another post, but I wanted to write a little about my stay in North Wales apart from as it pertains to my brother's health, because it has brought back so many memories!

My mom was from Betws-y-Coed (the chapel in the woods in Welsh) so I spent most of my summers staying in Betws as a little girl, and then working in my aunt's café on the quayside in Conwy after that. The first thing that strikes me is how pretty and green it is (all that rain you see), how many sheep there are (they are everywhere), and how lovely I find the Welsh language, which is now compulsory in Welsh schools. Truth be told it is probably closer to French than English and I just love that lilt!

I have been staying at my brother's house in Conwy. My brother's partner, Margaret, has been staying here since he became ill and for the first few days his oldest son, D, was also here. For D it is the ultimate struggle that we all have when we are still working, trying to get over to Conwy from Manchester (he doesn't drive), be there for his dad and also keep up with his work. To say it is stressful for him would be an understatement! Anyway, I arrived in Conwy by train and yet again it never ceases to amaze me how beautiful North Wales is.


My sister, her husband and my other brother drove up from Dorset and after heading out to the hospital to see my brother we all ended up meeting up in Llandudno, where they were staying, to have dinner. Llandudno is also very beautiful with very gentile properties lining the long promenade. It was here that Lewis Carroll made his home for a time, I believe, and there are many, many statues throughout Llandudno paying tribute to his Alice in Wonderland characters!


My oldest son and his wife flew out for the weekend to see my brother (which he really appreciated) and took a trip up the Great Orme after their hospital visit - they told me it was beautiful! And to think in all the years I have visited Llandudno I have never been up there!

Another day after visiting my brother (he couldn't take too many visitors or for too long) we took a trip out to Betws-y-Coed as I wanted my son to see my grandmother's B&B (they loved it)! 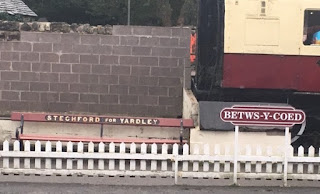 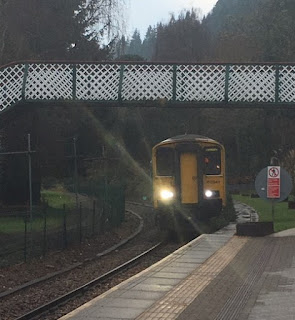 When the salmon are spawning they leap over the huge rocks at Pont-y-Pair bridge to try to get upstream. It is fascinating! Another time after the hospital we decided to eat in Conwy and ended up taking a walk on a very windy quayside to visit the "smallest house in Great Britain". My daughter-in-law, Lily, who is Swiss, just loved it and they have both decided that they are going to take a road trip round Wales at the earliest opportunity.

I apologize for not being so up-to-date on my blog reading/commenting but this week has been a bit intense, to be honest. It felt sad to be seeing all these lovely things without my brother, who is indeed terminal, but he could only take so much "visiting" at any one time. But we at least had time to create some good memories with him, I got to tell him how much I loved him, and he has promised to "come back and visit" from the other side as we both believe in the after life! I will write more about him in my next post.
Posted by Treaders at 00:33