You win some, you lose some!

Or I guess this post could be titled "the pluses and minuses of retirement" - kinda! Well so far I'm finding that I'm going to bed late - around 12 or 12.30 and consequently not getting up until 8 or 8.30. I had hoped to start getting up earlier than that but at the moment this seems to be my natural rhythm! Oh well, I guess I was never meant to be a lark was I! On the plus side, I am keeping up with some form of exercise most days. Yesterday I went with my friend to an exercise group which takes place in Geneva on Thursday afternoons. I had thought it was a hiking group but in fact it is more of a "keep fit" all year round group. There were about 30 of us and I would guess only five of us were under 70, but by gosh these people were fit! We started off warming up on the track, either running or walking - you can imagine which group I joined - and then they had us doing warm-up exercises for about 15 minutes before setting off on a walk up into the woods behind the sports centre. About 15 of them set off running and the rest of us chose to walk it. The walk wasn't difficult but what was tricky was knowing what to wear! You see, it had snowed heavily the night before and it was bloody freezing that day so I put on a rather heavy winter jacket. But as soon as we set off walking I obviously warmed up and my jacket became uncomfortably hot and heavy. Then when we got back we did some stretching exercises and the chill began to set in. Which makes me think, when I head back to the UK next Sunday I will stop in at the sporting goods shop to check out what they have by way of lightweight winter wear. You can get it all here of course but everything is so much cheaper in Britain! With my trip to Sri Lanka in mind I have also bought a lightweight "sleeping bag" to sleep in at the hotels and a microlight towel. I have never really bothered much about hotels as long as my bed is clean but my friend was telling me she always takes an old single duvet cover to sleep in and then leaves it behind when she goes to places where the accommodation is not exactly 4-5 star! I didn't want to pack something that might be heavy so I ordered the kind of lightweight sleeping bag that you would use in a Youth Hostel and it really weighs just a matter of ounces! (Note to self, I was a member of the Youth Hostel Association until I was about 50 so who knows, when I decide I want to travel round Britain again I might take up youth hostelling again. Why not, the hostels are rather nice nowadays and pretty much always in lovely locations)!

Anyway, back to the exercise group. While I was walking through the woods I started chatting to a rather nice Swiss lady and as we chatted an absolute "bullet" of a little lady went running past us at full tilt! My new friend pointed out that "bullet lady" was over 80 years old. She had a full head of thick hair, a great figure and would have put a greyhound to shame! I want to be her when I grow up! Actually, most of these people were very fit - I suppose they had been doing this all their lives and it certainly showed! So while the weather was pretty rotten, my friend explained that this group meets every week come rain or shine, so I will sign up (and pay up) next week and keep plugging away.

Then today, after coming back from shopping, I took myself off for another local walk. My friend had told me about a route round our little village but I'm pretty sure I took the wrong path and ended up half way up the mountain behind my house. I didn't mind the walking as the weather was beautiful but around 4.30 p.m. the sun starts to go behind the mountain and it becomes colder and darker, so I decided to double back before it got too dark and cold. In the meantime, I managed to get some nice pictures from further up the mountain behind me. 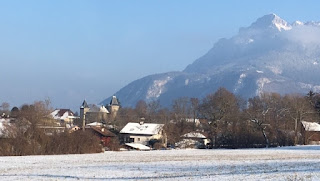 Another thing I wanted to do when I quit work was start experimenting in the kitchen again since I have always liked cooking. I had seen a recipe for "sopa seca" (dry soup) so thought I would have a shot at that. I didn't have the fine pasta that it called for but I had some Swiss spaetzli that I wanted to use up so threw that in. Maybe I should have stuck with the recipe but I would give my version maybe six out of ten! Either way I ate it! Then when I went shopping last week I bought some unsweetened almond milk - berrrkkkk! So I was looking for a recipe that would use that up plus a second bag of spinach I had in the freezer, when lo and behold up popped a recipe for "creamy spinach soup" which called for almond milk! Bingo! Or not, as the case may be. Yuck, you could taste the almond milk throughout so I sprinkled liberal amounts of soy sauce into it and ate it for dinner tonight. I will definitely finish it but I will definitely not be making that recipe again! In fact, I will be avoiding the supermarket aisle with the almond milk in it all together!

And finally, we now have a date for my brother's funeral. Friday, 8th February. These things take a long time to set up in the UK so I knew I had time to come back home beforehand. I had wanted to fly to Dorset next Monday but when I checked out EasyJet they wanted 200 Swiss francs one way, without the luggage (that's about $210) and I wasn't paying that! So I got a flight out on the Sunday into Bournemouth, where I will be staying with my sister and we will all drive up to Wales on the Thursday before the funeral. My return flight will depend on whether or not my youngest son can fly out (and that depends on whether or not he can get time off). If he can make it I will probably fly out from Liverpool with him after the funeral. If not, I may well drive back down to Dorset with my sister and her husband and fly out from Bournemouth. We can work that out later I guess!