I think I mentioned a couple of months ago that I wanted to start getting out and about rediscovering my local area because there really is so much around here as yet undiscovered (by me). I did a previous post on our trip to Chanaz and how lovely that was. Well last weekend I thought vaguely about going down to les Jardins Secrets (the Secret Gardens) about 40 minutes from here, but to be honest it was just waaay too hot and I kind of flaked out! Anyway, a friend asked me if I fancied a trip out there this Sunday, so seeing as it wasn't that far (about 40 minutes away) and it wouldn't be an "all day event" in the current scorching temperatures, we set off at 11 a.m. for a small village called Vaulx, just the other side of Annecy. And my oh my what a(nother) treasure we found! 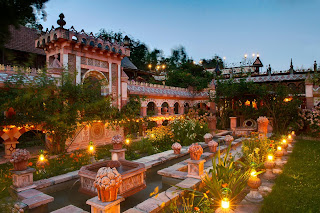 I really wasn't expecting much but I have to say it beat all expectations. Not just ours of course, but everyone we passed seemed to be stunned. It all started out in the early '80s when N (a French lady who was born in Morocco) and A (a French gent who was born in Tunisia) got married and bought what I understand was a derelict farm in this area (the Haute Savoie region of France). Veeeerrrrryyyy slowly they renovated the farm into a home for themselves and their three daughters and, given their innate love of North Africa, slowly renovated various barns and out-buildings into meadows/gardens, or "riyads", by their Arabic name. Painstakingly over the years A built the different structures while his wife, N, added the ornate Arab-style decorations. It was all done by hand and as their daughters grew older they also pitched in (as do the eight grandchildren who were all working there yesterday). It was a scorching hot day but there were bench seats, tables, water fountains, and the most beautiful flowers and decorations imaginable. (As an aside, we discovered that there were eight water features, each with the name of one of the grandchildren engraved on it). People were invited to sit and shelter wherever they wanted, open up doors into all the nooks and crannies behind which were inevitably family photos and other treasures. It was a real gem - sadly I don't think the photos do it justice, but here are just a few that I took! 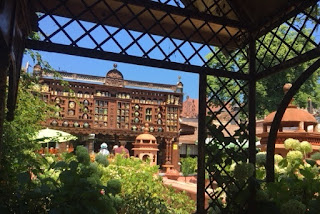 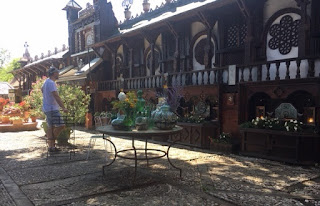 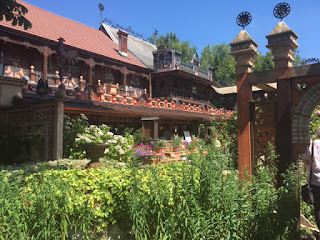 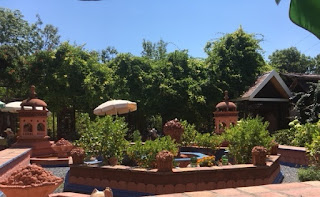 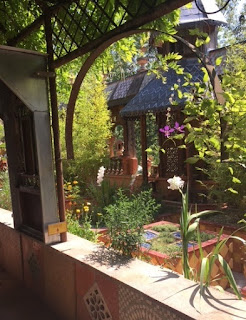 There were little rooms off all the pathways where you were free to roam and open doors and cupboards to your heart's content! 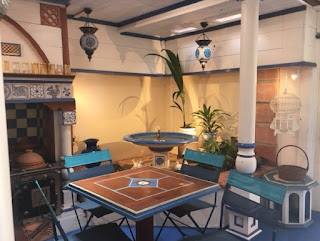 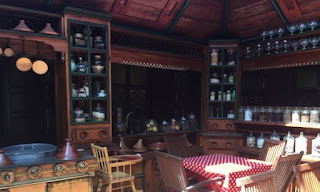 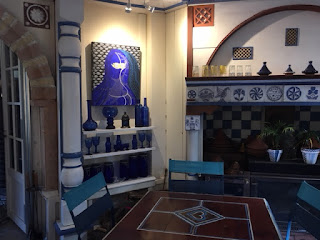 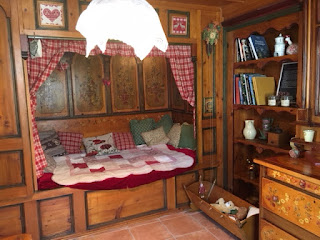 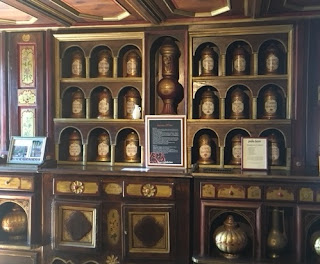 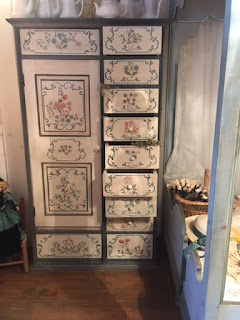 I think my favourite spots though were the "lounging" rooms, all decorated in Arab style where you were invited to just sit down out of the sun and take it all in. I walked into one room, though, and my jaw just dropped! They had the typical beds and cushions for people to lie on but had also put a swimming pool right in the middle of it, with ornate water features constantly drizzling water back into the pool. Of course running water is a very relaxing sound and frankly I think I could have just lay down and spent the rest of the afternoon there! 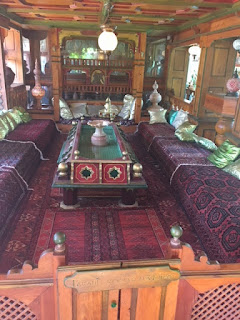 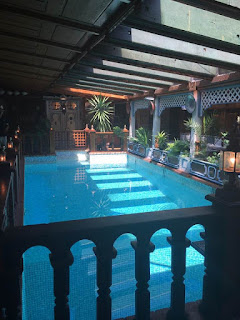 This pretty table had just been a simple, white garden table before they repainted it in all these glorious colours. Actually, I wish I had been quick enough to catch my friend, Karyn's face, as she walked into the pool room! That jaw drop would have been great to catch on camera - we all did it though - it was just stunning! 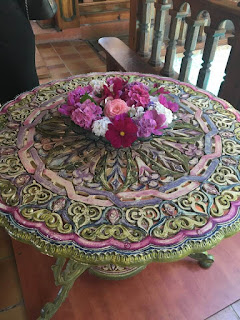 They have also (apparently only recently) started doing light lunches, which are proving a roaring success too. I had salad with local dried meats and cheeses plus a wonderful cocktail of apple juice, blackcurrant juice and lemonade. Karyn had the same but with a very simple dessert thrown in and lovely Moroccan mint tea! The grandkids seemed to be in charge of the cooking and washing up, and they were all extremely friendly and helpful. We were also lucky enough to see the grandparents (the original founders) helping out as the crowds were coming at them thick and fast! The thing is though, you never felt "crowded" as there were so many little nooks and crannies where you could take shelter from the sun in peace and relative quiet! It was truly brilliant!

You know, I admire people like this for their creativity but also for their guts in "going for it". I think if I tried to do something like this it would end up as one big colourful, splotchy mess, but here it just works! Ok they have been developing it for over 30 years but it truly is a fabulous site!  I don't have this kind of space or creativity but some of the flowers there have given me pause for thought. First on the list has got to be "hibiscus des marais"! I'm not sure what they are called in English. "Hibiscus" to be sure, but "des marais" (from the swampland? swamp rose mallow?). Who knows, but these hibiscus grow to about 1.5 metres tall with the flowers measuring approximately 12 inches across (how about that for a mix of metric and imperial!)

And finally, I think I know why I was a bit nostalgic/melancholy in my last post! I have been cleaning off a couple of bookshelves and wiping down old photo albums that were a bit dusty. So of course the first thing you do with an old photo album is look through it isn't it. Anyway, it got to me a bit in the end - I was feeling a bit sad - all that "wasted/lost" time I guess. Now it's not like me to be down but it really seemed to hit me the other day. Well that is until we had our fabulous day out at the Secret Gardens and then Steve called me later that evening and had me roaring laughing again, so all's well that ends well!