Isn't it absolutely wonderful that they are finally bringing those young Thai boys out of that cave after such a horrific ordeal! As I am writing right now they have brought eight out - I keep flicking back to Sky News live for updates. And what absolute heroes the rescue teams are, in particular the divers, for going to hell and back themselves in order to save a group of what must be obviously terrified young boys. The sheer danger of it must surely be brought home by the fact that a brave Thai Navy Seal died of lack of oxygen before even the first boy was brought out. A brave and selfless man - as are they all!  Let's hope they get the remaining five out and quickly! 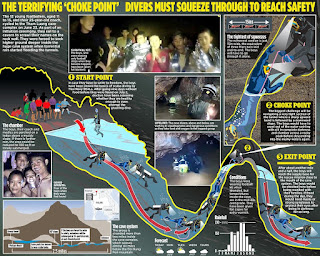 In other news, it's cycling season here (actually it's cycling season pretty much all year round in France!) and you can't move on our small back roads for gaggles of cyclists heading, usually, towards Grand Bornand (that's where John Kerry fell of his bike and broke his arm). Hat's off to them for wanting to do that - I don't think I could even make it down to the bakery in the next village in this heat even with the promise of a pain au chocolat at the end. What I do wish, though, is that they would bloody well cycle in single file on these small roads, rather than drivers having to queue up behind them to get past! I can see why there is often animosity between drivers and cyclists to be honest, particularly in cities, but I'm not sure it's a case of the cyclists always being wrong or the drivers always being wrong - I'm sure there is selfish behaviour on both sides. That being said, when we made an earlier than usual start the other Sunday to go exploring Chanaz it was because they were blocking the road through our village from 11 a.m. to 3 p.m. for a cycle race. As I said above, our village is the scenic route that leads up to Grand Bornand so that's why they schedule races through here. Fair enough I suppose, but then yesterday (Sunday) our village road was closed from 8.30 a.m. to 4.30 p.m. for a bike race expected to number 17,000 cyclists!!!! Once that road is blocked off we can't get out. I gave up in the end and just decided to have a day at home pottering in the garden - and very nice it was too. I hope that's the last of the bloody things round here for this year though!

In other news, I've mentioned before that I'm not a particularly big football fan (much preferring rugby) but since England was playing on Saturday I thought I would take advantage of my enforced immobility to watch the match and it was great - well I say that because England won of course, but I really did enjoy it.  What gets me though, is that when Sweden did something amazing (which wasn't very often to be honest) they panned in to some beautiful Swedish fan cheering. 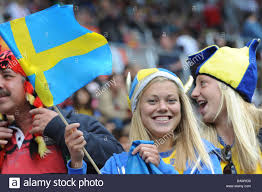 But when England did something wonderful (which was much more often) we got this lot: 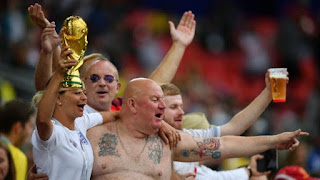 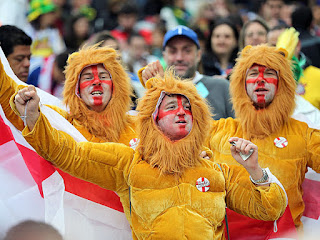 Oh well, maybe that's a fair reflection of the state of play off the pitch but really!  Come on England!

While I was flicking back and forth watching TV last night waiting to hear if any more boys had been brought out of the cave, I started watching a programme called "Rich Kid to Skint" - poverty porn I suppose - where they took some rich little princess and had her stay overnight with a single mother of two on benefits in her one-bedroomed flat. My God!!!! What crap TV. Now I don't know why the young mother was single but she came over as pretty decent but Princess Twinkletoes!!!! If she was mine I would be ashamed! But then again, it's obviously mommy and daddy that made her like that, isn't it! OK, they have money and spend it on their kid. That's their privilege, but she was such a vacuous, monosyllabic amoeba it was embarrasing. Massive hair extensions, one inch long false eyelashes, one inch claws attached to the end of her fingers. Again, her choice, but she could barely string two words together, flailing her claws all over the place, playing with her hair, taking selfie after selfie, it didn't seem that even a single brain cell was firing in that tiny mind. What happened to having a personality? What happened to hard work? Why do they all end up looking like something from TOWIE or Keeping Up With The Kardashians? It beats me, and I really do fear for the future of these characterless individuals.  My goodness, now I know why I shouldn't have been channel hopping! It makes me so mad!

And finally, I have definitely made up my mind to retire at the end of the year. My boss was in Japan last week so I wanted to wait until I had a chance to speak to him before I spoke to my director. Trouble is, the boss is "a bit stressed at the moment" (it's a permanent state so I don't worry too much! My mind is  99% made up, even though I have an occasional wobble and run the figures (yet again) through the number-crunching machine and I know I can do it, buuut just this weekend I discovered a lovely blog called Miss Mazuma - a young woman aiming for early financial independence and how she is going about it. Is it ironic then that as I was having yet another wobble about retiring I came across this quote from her blog:

"But, seriously.  Coming up against “the norm” in life is difficult.  I mean, who doesn’t want to commute an hour to work [I WISH], put in 40+ hours a week at a boring job, drive home in traffic, eat a shitty meal in front of the TV, then head to bed before doing it all over again every weekday (minus 2 weeks vacation!) for the next 40 years.  Who? Sounds exhilarating!! Why would anyone want to stray from that path?"

Thanks for the kick up the butt Ms Mazuma!