Or odds and sods really. Not a lot going on this end. Saturday, of course, was Bastille Day in France so people let off fireworks on the Friday night in anticipation of having the day off on Saturday, which was just as well really as Saturday evening was wet so the fireworks displays would have been spoiled. Then Sunday was the World Cup final which, in my opinion, France deservedly won. To say my local town erupted would be an understatement. I actually had the sound turned off on the TV but knew when France had scored because of the roars from my local town 3 km away! Good for them, anyway. I was sad to see England go out but like most people I thought this young team did us proud. They are young and have plenty of room to develop and improve so I'm looking forward to the next round of Euro matches. Well done the three lions!  Onwards and upwards! 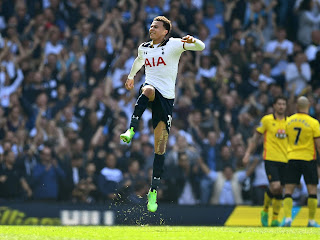 Then of course we had the visit of the Donald to the UK (and other parts). Beerrrkkkk is the only way I can describe how I felt, and most others seemed to have felt the same way too. At first I had misgivings about "Baby Trump" as I didn't feel it was respectful to the office but then as one of the organizers put it "we didn't put a US flag on it - we have every respect for the office, but we are just showing him the same respect as he shows others, i.e. none!" Fair enough in the end I suppose. 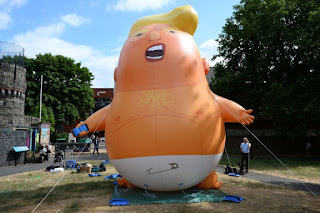 Thank God Melania is classy though, I mean, if she behaved the same way he did it would be a real old bun fight wouldn't it.  Then to have the Queen invite him to inspect the guard of honour and him walk right in front of her!!! Good god man, have you no manners. She is this diddy little lady (whatever her rank) and he just plops his ruddy great bulk down in front of her while she is inspecting her own guard! She is used to handling this kind of thing of course after so many years, but I really wish she had just taken his legs out from behind with her handbag! 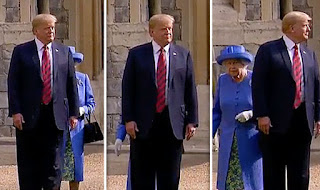 And I really feel for the people in Scotland - apparently the costs for security while he was there for two days ran to £5 million - and as they so rightly put it, why should we pay for his security when he is coming to play golf on his own private golf course? Thank God it was such a short visit, is all I can say. I hear the reception was no better after that but as for the meeting with Putin!!!! Wow, just wow! You only have to look at the caricatures in the world's press to see what people think. I tell you, I wouldn't want to be part of that world for all the tea in china!

In other matters, 10 days ago I was fast asleep when I woke up with a start at 4 a.m. thinking there was someone in the house. I got up, turned all the lights on and went downstairs. Nothing! So I went back to bed but when I got up in the morning to go to work I looked at my phone and there at 4.08 a.m. was a text message from my ex asking about a recipe for "pâté campagnard" - a pâté made from pork!   What the f.......!!!! It's not as if I ever made this pâté and there was an ancient family recipe, but to send a text asking about something he could easily google and at 4 a.m. knowing that I have to get up for work!!! I was furious, but decided the best response was no response. You just don't engage in those cases. I mean we've been divorced almost seven years so why contact me about such rubbish!! Then on the Monday evening he sent me another text asking if I had got his previous message, so I just said "oh the one you sent at 4 a.m. knowing full well I had to get up at 6 a.m? Oh that one? Yeah I got that one. Thanks for that"! Geez, will he ever leave me alone!

In other matters, my car started playing up last week. I had difficulty getting it to start and thought it was a flat battery but no. I managed to hobble to Ford and they thought it was the ignition button so I had to wait a couple of day until they had ordered a new one. I managed to crawl to work for three days but on the last day before I was to drop it off every bloody light on that thing was going nuts - flashing indicators and so on as I went down the motorway. Honestly, you would have thought it was a presidential motorcade (see above) - but no, it was just me! In the end they kept it for two days (they lent me something that looked like a can of beans on wheels in the meantime) and they were telling me that they pulled loads of stuff apart and put it back together again but couldn't really say what it was. There was, however, evidence of a "fouine" attack inside. Now a "fouine" literally translated is a "weasel" but I think "fouine" is a local animal, something like a weasel but probably only about three inches or so long. The little buggers get inside your engine and nibble away at anything they can find, although in my case not the wiring thankfully. In the end Ford got my car working again but they have no idea how!!! Still, all's well that ends well - while I was waiting they were having their end-of-day apéritif so I got invited into the back office with a couple of other clients and we all had an apéritif together - vive la France, as they say!

And finally, I got round to telling my immediate boss last Wednesday of my plans to retire - he was stunned and asked what they could do to make me stay! Then on the Friday I told my director who was also stunned. I apologized for springing it on them but explained that it had nothing to do with work but everything to do with my dreadful commute. The director asked me yesterday to change my mind but I told him I would think about it until October, when I have to give three months' notice. I have an appointment with a tax advisor at the beginning of September to make sure my calculations are correct. I'm pretty sure they are but there is one tax called "contribution sociale généralisee" that I'm not sure is already counted in my tax calculations. If not, that is another 8% tax to think about and may put the spanner in the whole works as I just can't afford an additional 8% tax on top of the 22% I have already calculated. As I say, I'm pretty sure it's already included in the 22% but will have to wait until September to find out. In the meantime, I am still waiting to hear back from the French bank about the final pay-off for my house. I understand that they really won't be wanting me to pay off my mortgage 10 years early but really .... as soon as I get those two figures I can go ahead and hand my notice in. But gosh it's hard sitting around waiting isn't it!
Posted by Treaders at 16:07