After our short stay around Danaus, we spent the following two nights in La Fortuna, near the Arenal volcano. I have to say the hotels were pretty basic but clean enough but a hair dryer would have been a treat and (if I am thinking of the right hotel here) somewhere to hang my clothes other than two coat hangers. Still, at this point we weren't really thinking of unpacking and as I'm not difficult I could work with that. I had actually packed a travel hair dryer which turned out kinda like trying to dry your hair by having a sleeping baby breathe on it but hey, by the end of the trip I was definitely going for the "bird's nest soup" look anyway so I pretty much gave up.

Our first trip that morning was to the Arenal volcano. It wasn't such a long walk up to the volcano but it was very hot and humid. Thankfully, our guide turned out to be quite a bird enthusiast and kept stopping every 50 metres or so to point out unusual birds. I don't have much problem at all with walking/hiking but I have real problems with the heat so I was pretty glad when he pointed out what felt like every native bird in Costa Rica!  The volcano was impressive (and thankfully still sleeping) but the humidity did me in, I have to admit. 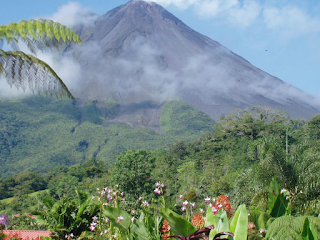 Our guide made the misery up to us later by taking us to spend the evening at one of the many hot springs in the Arenal region, followed by dinner. 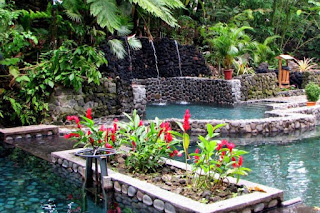 I thought our local hot springs at Lavey-les-Bain were impressive (which of course they are) but these were just bliss with plenty of room for everyone and gorgeous temperatures both in and out of the springs.

The next day Ron had us out at La Fortuna waterfall. I have a lovely video taken from mid-way down these falls but I'll be damned if I can get it to upload to blogger. Facebook no problem, but not blogger. Anyway, Ron warned us that it was 500 steps down to the water hole/swimming hole so obviously "500 steps back up", although in reality it felt like 10,000!!! On the way back up I was counting the bloody steps out loud to myself in Spanish and at one point sat next to a Costa Rican lady to catch my breath and told her we were on step 249! She laughed so we slogged our way back up the remaining 251 together. I think she thought I was going to have a heart attack as I was puce in the face but again it's not the climbing that does me in, but the heat. Anyway, we both made it and went and had a drink together at the top - where we spotted the prettiest praying mantis, and for once I was able to get a close up that didn't come out too badly! 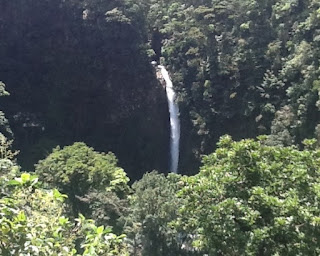 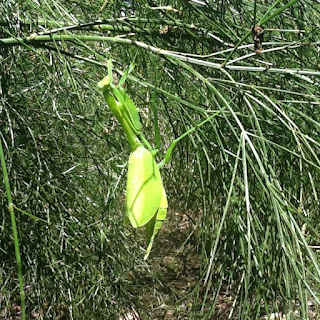