And on we went!

After our two night stay in La Fortuna we headed out for the Cloud Forest National Park at Monteverde. Monteverde is situated at 1,500 metres above sea level and I was sooooo glad I had taken my ski jacket as it was howling wind, pouring rain and bloody freezing! It was so weird to go from 25°C to God-only-knows how cold in one day but that's what we did in the space of about four hours, I guess. On the way there we stopped at a lovely little restaurant for lunch, overlooking a reservoir and as always the food was very good but the souvenirs pretty pricey! 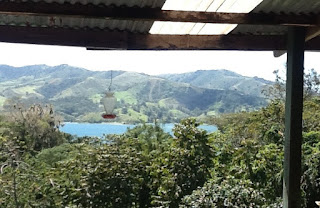 About 10 minutes after we left the restaurant the driver pulled over as there was a whole colony (?) of coatis crossing the road. It was really weird - they took no notice of us and didn't seem to be bothered by the traffic either. Such funny looking little beasts (thought the coati to himself ....)! 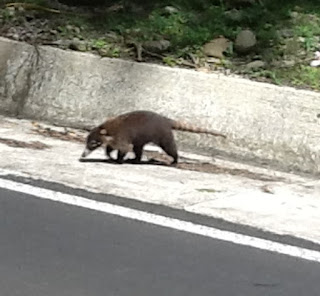 We made it to our hotel around 6 pm, if I remember right, and my goodness, you should have seen the size of our rooms! Ruth was the only one who didn't  have the massive bedroom that we others had (I think they were probably studios for families) but she had an enclosed veranda so she could sit outside, even though the wind was ferocious! 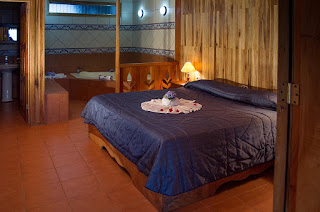 That is actually a triple bed with the bath/jacuzzi in the background and the shower room to the left, but there are stairs to a mezzanine to the left out of picture and that also has two double beds! Crikey, all that room for little old me!  When we were checking in one of the receptionists told our guide that a security guard had seen a puma in the grounds the night before! Now I know (being cynical) that they could be saying that for the benefit of the tourists but our guide seemed so thrilled I'm sure it was true! On the way down to dinner that night we did see an agouti crossing our path (saw quite a few of them in fact) but no pumas!

Our guide offered to take those that were interested on a pre-dawn walk through the forest to see if they could catch any interesting wildlife. I begged off as I was tired and in any case wanted a few hours to have a massage (yeah, I know, first world priorities right) but apparently they didn't see much, just a few exotic birds, much to the delight of the avid bird watchers amongst us!

Two of our ladies took a trip to a local park where you could go over the suspension bridges but they got absolutely soaked to the skin, so I was glad I had had the massage instead. I certainly didn't want to be getting sick for the remainder of my trip through sloshing around in wet clothes. 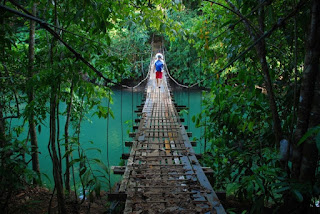 And then finally, on the last afternoon, we went to the Cloud Forest National Park, where to be honest we didn't see much more than we had already seen but at least we did avoid getting soaked - although just by the skin of our teeth. 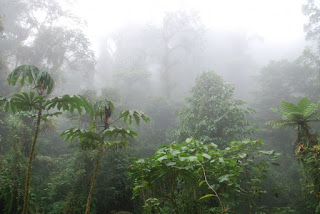 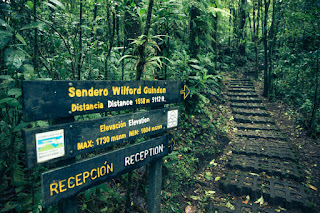 We were only there a couple of hours and trekked up to a little waterfall, which was very pretty, but I think we were all glad to get out of the cold and wet the following morning. We had to get up at 4.30 a.m. in order to be on the road by 6.00 a.m. as in order to allow workers to maintain the access road, the local authorities closed it to traffic for "X" number of hours per day in order to allow the work to progress. So we, therefore, had to be through "Checkpoint Charlie" before lockdown.  Which we did. I am not a morning person but it's amazing how you can adapt to early mornings when you have to, isn't it! 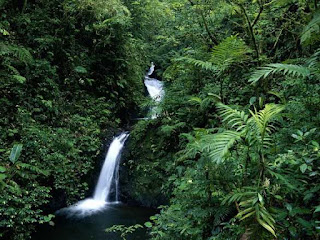