Our last day in Costa Rica was to be spent - I thought - travelling from Manual Antonio National Park direct to San Jose where we would spend our last night before flying out the following morning. What I hadn't realized was that Ron, our guide, had other plans. We drove straight from the hotel to the local marina where we were booked on a boat trip which included snorkeling, sight-seeing with lunch and a cocktail thrown in! What a lovely way to finish our vacation!  The trip lasted about three hours and while I chose not to snorkel as I wanted to stay out of the sun, it was a very relaxing way to "seal the deal", so to speak. 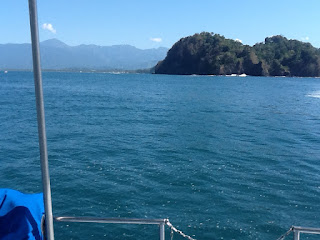 After that it was all back in the van and San Jose bound. On the way we stopped at a souvenir shop but again, it was very pricey. Sorry but while everything was beautiful there was no way I was going to pay those kinds of prices - until - I saw the prettiest photo albums whereupon my willpower cracked. I didn't spend a fortune and I was thinking of making an album up for my son, who will be 26 in May, since every time my boys come over they end up pulling out the photo albums. In fact, I am at this moment trying to set up snapfish albums for both of them, but not being very technically minded and finding snapfish a bit fiddly anyway I think it would be best if I aimed to make these albums for Christmas presents rather than birthday presents. The Costa Rican photo albums, though, are quite small and I'm pretty sure I can fill them with childhood photos for both of them.

As we were leaving the gift shop the heavens opened and my goodness did it rain. It make me quite nostalgic for England actually!!! But seriously, that was some downpour, even if it only lasted about 20 minutes. Then of course as we got nearer to San Jose we also hit rush-hour traffic - again a reminder that it would shortly be back to the grindstone for me!

That evening the six of us in our group all decided to eat together in the hotel, and what a laugh we had! Sally (one of the older ladies) was quite the character and she was telling us that since she retired at the age of 66 she has been constantly busy taking courses with U3A (University of the Third Age). Her latest foray has been to take piano lessons, given that the clarinet lessons weren't much of a success! She took up clarinet for the simple reason that they had one at home from when her son used to play. The only thing was, she started learning in September and she found out that they were supposed to play a concert in December!!! She was like "what the flip, I can barely even read music" and then she did an impression of her desperately trying to read the music during the concert, spotting a note that must have been "one of hers" and "giving a toot" about every 30 seconds! I guess you had to be there but we were crying laughing at the visual. So then we all pitched in telling the stupid stuff we had done. I don't know why this came to mind really but I told the story of when I was still in primary school (so under 11 years of age), and my friend, Dawn, came to see me because she was supposed to be in a swimming gala in Tuesday but her mom had been rushed to hospital and she didn't want to compete. I didn't know what to say so in the end I told her not to worry, that I would go and see Miss Moore and tell her that I would replace her in the gala - the only trouble was that I couldn't swim!!! I somehow pictured myself going off to the swimming baths on Saturday, learning to swim that afternoon, and competing in a race on Tuesday night! Bloody hell! I could just imagine the looks on my parents' faces as I threw myself in that pool - and most likely promptly drowned! Luckily (for me) Miss Moore had other ideas about Dawn's replacement!

We didn't stay up too late that night as four of us had a 5.20 a.m. taxi ride to the airport, so we all bade each other farewell and promised to swap photos (which we have). I have to say, though, that Costa Rica is beautiful and I was lucky enough to have joined a very small and very friendly group - so success all round, I would say. The journey home was quite another story - but there's time for that another day I think!
Posted by Treaders at 15:42