This weekend was quieter than the last couple of weekends but I don't mind that at all. Sometimes it is good to have a lazy one isn't it. On Friday I resisted the urge to take scissors to my hair, which was sticking out all over the place, and called and got an appointment to get it chopped off on Saturday. I got my usual running around done, plus hair cut and also jammed a good 45 minutes of gardening in (so another trip to the tip this weekend), but otherwise a pretty quiet day.

Then on Sunday two friends and I had tickets to see Belcanto - a tribute to the fabulous Luciano Pavarotti - at the Hotel Kempinski in Geneva and it was wonderful. I have seen many shows over the years but I think this has to be my absolute favourite. I always loved Pavarotti's beautiful voice and this touring group - who are funded by the Pavarotti Foundation - were just so amazing it sent shivers up my spine. I am not an emotional person (stiff upper lip and all that) but at the final song, the male singers started singing and then a screen was lowered with Pavarotti singing to end the song. They had such beautiful voices it would be hard for me to chose my favourite, but one young man who was quite small in stature had the most beautiful, powerful voice imaginable, so I guess he might have been my favourite, but they were all just sensational! Quite a few people were crying at the end (even I was close) and they had three curtain calls before they sang their final encore - which was made all the more sweet by the fact that they took a little girl of about eight or nine and hoisted her up on stage with them, whereupon the first male singer got down on one knee and serenaded her, while holding her hand! And hats off to mom and dad for taking such a little one to such a magical event! 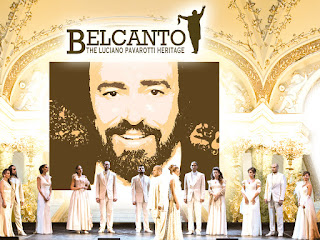 After such a glorious Sunday afternoon, I was so hyped up I went home and made a caramel-apple cheesecake to take to work. Not bad, although not being a fan of apples I don't think I would put them in it next time. Still, it has gone down very well here all the same.

The bise (wind) is blowing today which I kinda love. It makes the lake look like the ocean but of course is bitterly cold, and with the temperatures dropping we should soon have some magnificent (and slippy) sights out my office window, as they are predicting snow this week. Thank goodness I have an appointment to get my snow tyres on on Thurday. Winter draws (drawers?) on, as they say! 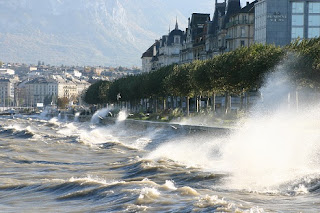 And shortly, it will look like this picture, taken just outside my office last year! 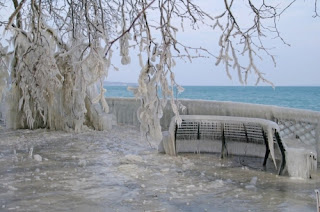