I watched a rather funny TED talk by Tim Urban the other day - "Inside the Mind of a Master Procrastinator". I won't post it here as it is easy enough to look up, but as I say, it was funny, if not exactly earth shattering! I can't say I consider myself a procrastinator (I'll give more thought to that later .....) but I know I work better (a) when I have a lot to do and (b) when I am up against it time-wise. That being said, I tend to anticipate things and get stuff done in advance so no, I guess I'm not a procrastinor!

Anyway, in the TED talk he starts off by saying that people can be divided into the rational thinkers and the "instant gratification monkeys" who procrastinate before getting things done. 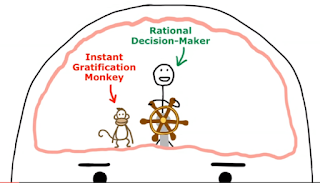 Instant gratification monkeys let things slide until the "panic monster" shows up - at which point they know that they had better get their act into gear and produce whatever it was they were supposed to! 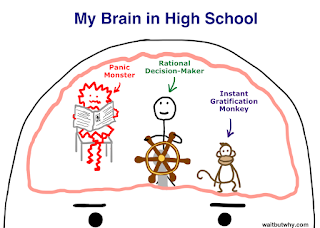 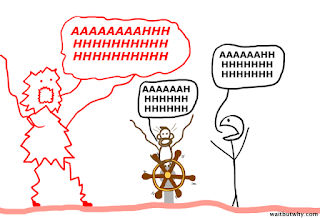 Nothing earth-shatteringly new there right? Buuuuuut, afterwards Tim flashed up a simple photo of what looked like a white page covered with 4,680 squares. Nothing more. What if there was no deadline? What if the panic monster didn't scare you into doing whatever it is that you were supposed to do? Those 4,680 squares, he explained, were the number of weeks of life available to a human baby, assuming that baby lived to be 90 (and that's already a pretty big assumption). How many of those squares had you already checked off? How many more would you check off before you (a) lost that weight, (b) stopped smoking, (c) got into shape, (d) got your financial house into order? You see where I'm going with this. Now that was a pretty "ah-ha" moment for me I can tell you (and I don't get many of them). And he was right. What if there is no deadline - you are just going to do something "one day". So with that in mind, I thought I should get my backside back into gear (again) and went to the gym yesterday and have already clocked up 14,000 steps today. If not now, then when (indeed)?