I've been frantically busy these last couple of weeks getting huge documents prepared ready for our next big meeting in December. I don't mind at all as I kinda like the satisfaction I get pulling it all together, but that is the reason I haven't posted much nor commented on other people's blogs this past while.

Anyhow, despite that, I did manage to take myself off to a lovely spa here on Lake Geneva last Sunday. For Christmas, my youngest and his girlfriend had given me an entry voucher with "hammam" circuit included and when I realized it was about to expire in November I thought I had better get a move on. I had never been to this spa as it is relatively new but what a lovely time I had. The "public" part was a bit dark for my taste but after the first hour, when I got on the hammam circuit it was much lighter and less crowded. I did the jacuzzi, friction rub room, steam room and then headed off for a 50-minute massage which I decided to treat myself to. Gosh it's been ages since I had a massage and I felt so good afterwards - all soft and wobbly (well "wobblier" really). Not a pretty site in a bikini but ..... And of course, as someone who wasn't brought up in the lap of luxury, a bit of luxury treatment feels like dying and going to heaven. 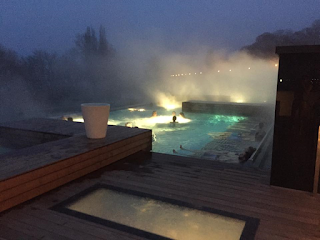 And I definitely loved the Moroccan theme inside - the exotic lamps hanging low and the beautiful metal-work tea tables. Think I might look out for something like that for my back terrace in the summer!

As I was saying, I am really busy at the moment and have worked late hours most of the past two weeks. The other night, however, I did get to watch a couple of documentaries that I thought were really interesting.  The first was on the  night of Halloween so I never got to watch the whole thing uninterrupted, but it did give food for thought. It was called something like "Who's spending the UK's billions", and was an investigative documentary into how much money was being paid to consultancy firms in times of austerity to have them show you how to save money!!! Madness right! The one part I did catch was in a small town in Wales where the local council spent millions on a consultancy company to show them how to cut back. At least the lady Councillor had the balls to appear on TV (before storming off in a huff when the interviewer asked her to justify this spending on consultants when people were being laid off).  Another glaring example was a consultancy firm being paid UK£ 60 million (I think that was the figure - as I say running back and forth handing out Halloween candy didn't help) by the NHS (the UK National Health Service) to show them how to save money!!!! The NHS is stretched incredibly thin and deserve better considering the wonderful work they do. When the interviewer pointed out that the £60 million paid to the consultants would have kept two small hospitals functioning for a year, the interviewee squirmed and tried to waffle his way out of it.

Anyway, don't talk to me about "efficiency" consultants. Sorry but I think 99% of it is a crock of shit and they just have their noses in the trough. I mean, how many of us have been on "team building" days out, tearing through the flip charts, and come away with bugger all at the end of it. One lunatic that we had got our boss to have us set up a kind of "chat forum" between us (all 25 of us!!!) so that we could share information we needed for our work. We somehow always managed to share that information at the coffee machine or at the photocopier before - we didn't need to pay some consultant $2,000 a day to come up with that brainwave, all the more since his brainchild lasted about three weeks before we went back to meeting at the coffee machine! And if you remember I talked in a previous post about the psycho boss we had a few years ago - it seems a bit telling that the first consultant we hired after she joined us turned out to be the first referee on said psycho's job application. A case of you scratch my back, I'll scratch yours eh?

The second documentary was called "Saving Lives at Sea" and follows the RNLI (Royal National Lifeboat Institution) on their call outs. While the RNLI are a charity they refuse government funding as they want to run their organization as they see fit. So all the staff are volunteers and the RNLI is self-funded. I regularly give to charity but have this daydream of winning a largish amount on the lottery and sending them £1 million, as they would be top of my list (I have a list of about five favourite charities). They do an amazing job and are remarkably non-judgmental when they end up having to save idiots from themselves out at sea. 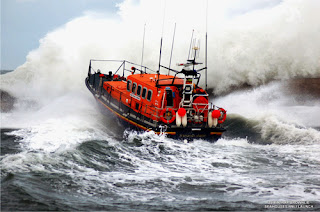 After the "Mousehole" tragedy of the Penlee Lifeboat in December 1981, where all eight volunteer crewmen drowned, I have a very soft spot for the RNLI. Here's hoping I get the next big win on the lottery then - I don't need much but would have great pleasure giving it away!

And finally, I have just started reading a book by the late comedian Kenneth Williams called Acid Drops. "Acid drops" are what you might call put-downs or pithy little retorts, and Williams was known for them. I wasn't a great fan of his and while the book is ok I feel it is a somewhat contrived collection of snide comments, put-downs and so on.  Of course I guess most people have heard of Churchill's put down of Lady Astor.

Lady Astor - "Mr. Churchill, it would seem to me that you are drunk"!
Churchill - "Madam, I may be drunk but you are ugly and tomorrow I will be sober ...."! 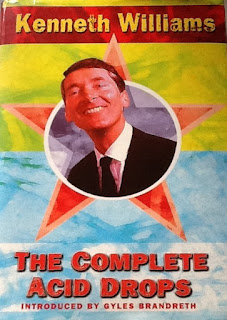 As I said, while it seems somewhat contrived, there are some pretty funny examples in it.  One of the better ones is an incident that happened in 1960 at the United Nations. Apparently the British Prime Minister, Harold McMillan, was talking when Nikita Krushchev erupted in fury at something he had said and started banging his shoe on the table. Without missing a beat, McMillan turned to the interpreters' cabin and said "interpretation please"! A gem!