Not much going on here!

I have my big, semi-annual meeting on Monday. All the work has been done, the reports are out (all 500 pages of them) and I am just praying the French and Spanish versions are issued tomorrow, although to be fair our translation section have never let me down yet. So now, nothing much is going on, nor will there be much after the meeting. I much prefer to be busy but I'm sure I can find stuff to be going on with.

Last night it took me two hours to get home! Aaaarrrghhh! Luckily for me, just after I got through the border they had posted a sign to indicate a 6 km tailback (and growing) so I was able to jump off the motorway and take the back roads. Even so, since there is major construction work going on over there, the bloody roads were just one traffic light after another so I pretty much crawled all the way home. And then again this morning, although I have no idea what happened this morning. Last night I could see it was an accident but as for today ... no idea. People say to me why don't you move but (a) the closer you get to Geneva the more expensive it is, (b) I wouldn't get another mortgage at my age anyway, (c) when the CEVA train comes through my local town it will (would - I'll be gone by then) halve the commute time and hence push prices up, and finally (d) my neighbours are great. They really look out for me and being on my own that is priceless, I can tell you. Funnily enough, this morning as I was day-dreaming in the traffic jam, I remembered when we went to the States for Christmas some years ago. When we got back to France, my neighbour had been in and lit a roaring fire to welcome us back. Trouble is, he must have got distracted and left the back veranda door open when he left - the bloody house was actually freezing, although I never told him that. But you see, who would move away from neighbours like that. Then this Saturday night we have our second "neighbours" board game evening. It should be a hoot, judging by the last one at my place, so I'll probably have some funny pictures to share next week!

So more this and that. I am so sick, sick, sick of wearing the clothes I wear for work. I keep putting off buying new because I am determined to lose weight (yeah, right, you've heard that before haven't you?). Don't get me wrong, I am more than presentable but .... Anyway, last night I was looking on the web for clothes to get me through the next few months until I am again sylph like (?) and it was so depressing when they didn't have half the clothes in my size, well not the ones I like anyway. I mean, if you want to look like a circus marquee no problem, but nice clothes, there weren't too many of them in my size. I'm not ginormous by any standards but have a hard time getting something where I can fit both boobs in at the same time. So onwards and upwards, as they say!

And finally, talking of funny pictures, I finally got round to printing wedding pictures for my (ex) mother-in-law. I had promised her them ages ago and had indeed bought photo paper to print the copies on. Trouble is, I buggered up the heavy-duty printer at work doing it - not once, but twice - the printer technicians weren't best pleased I can tell you! I guess I'm off their Christmas card list then. Anyway, as I printed the pictures off finally, I came across this one below. After the meal and as the games started, the two competitors were given instructions to dash out among the guests and come back with, in this case, a tie. Now the young man giving the instructions mumbled a lot and I mis-heard him when it was my turn. My ex, however, has obviously got out of the habit of speaking French so hadn't understood a thing until this rather large, young man ran up to him and "started trying to strangle him". The man on the left is the father of the bride, the man "being strangled" is my ex-husband, and the lady roaring laughing is Jen's mom (my youngest son's girlfriend's mom). The photo just tickled me though so I thought I would share it with you. Oh, and I finally got the photos, plus a letter plus a Christmas card sent off to my mother-in-law (so that's one more thing ticked off my list). 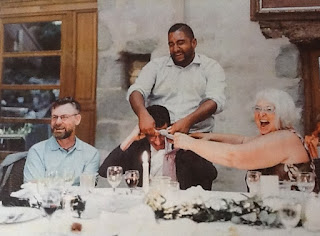