So much wasted time!

I had no plans this weekend so all-in-all it was very quiet and very pleasant. Oh how I love me some weekends like that! Actually, though, I got an awful lot done so I'm feeling pretty pleased right now.  Someone had mentioned to me that one of the local towns had a new shop that had just opened where you could take your own containers rather than having to accept their packaging. I reckon there must be one in Geneva and certainly one in Annecy but I had not heard of anything locally. Of course we have health food shops and organic shops where you can buy some things without packaging but to be able to get everything packaging-free was interesting to me. Admittedly it wasn't very big but it is certainly a start. The lady explained to me that if I wanted to buy, for instance, washing liquid she would need to sell me a specific container (for some reason) but after that I could take it back as many times as I wanted. Everything else was "bring your own container". The selection of goods so far is pretty limited but I'm hoping it will take off, although to be honest I don't see how you could shop for a family in this way. Who knows, like I say, let's hope it takes off (I guess we are only about 30 years behind California in this respect then)!

Other than that, not much going on really. I got to watch some great rugby internationals on Saturday. England won (yaaaay) - and it seems like the England team are on the way back up again. Obviously as the older, more experienced players have retired it takes time for the youngsters to fill their shoes, but they certainly seem to be heading that way. Then after that, Strictly Come Dancing and all I can say is "go Debbie McGee". She is 59 (the same age as me) and it is wonderful to watch her dance (says me who looks like a pregnant heffalump in comparison). I couldn't begin to hazard a guess as to who might win, but to me Debbie certainly stands a good chance. Let's hear it for the older woman!

Then on Sunday I thought I should give my brother a call. As I mentioned before, he now has a lady friend, after being on his own for quite some time after the death of his wife. I'm not sure how long they have been together - maybe nine months - but she seems to be doing him the world of good. Anyway, two weeks ago they took themselves off to Rome for five days, but unfortunately, M fell on the first day and injured her shoulder. They ended up in the emergency room at Rome hospital and to say they were less than impressed would be an understatement. They took an x-ray but with the swelling they weren't really able to tell what was wrong, so they just gave her a crepe bandage and told her to go to the pharmacy to buy a sling. She said the nurse's uniform was filthy and when they asked if they could take the x-ray with them they refused.  M was determined that they stay on and apparently they had a good time, within the limitations imposed by her arm. My brother's son picked them up at Liverpool airport and then they caught the train the next day back to North Wales, whereupon M, who was still in pain, went to the little local hospital. Turns out she had broken her shoulder, so they took her into surgery the next day and all is sorted. Thank God for the NHS is how they put it. Buuuuut, get this, since M can't drive she will now be staying with my brother for some time so that he can take care of her. I guess the true test of a new relationship is how you react in times like this isn't it so to hear my brother say "I can get her knickers on but the bra got me beat" says it all don't you think!

Later that afternoon I decided it would be good time to put the last of my garden to bed, put the garden furniture away and cover up what couldn't be moved since they are forecasting snow this week (I'm so glad I already got my snow tyres on). My colleague teases me that I must be attracted to the little fat French man at the local tip as I make "any excuse to go down there on a Saturday" (hence more garden refuse to go next week). I think it could have something to do with me saying how enticing I found his little belly peaking over the top of his trousers, and how the wind softly whistled around the lone tooth in the middle of his upper jaw when he spoke! So now I have a reputation with my colleague ... oh well, if you can't beat em join em. I told C I had visions of me, you know like in American Beauty, with the blond love interest lying there surrounded by rose petals, only it would be me lying in the tip surrounded by grass clippings and compost! Told you I have a wacky sense of humour! 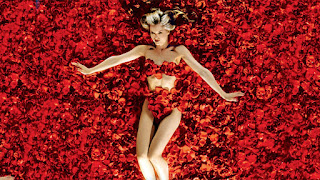 And finally, I was sad to hear of the death of teen idol David Cassidy's last week. Goodness he was only 67 and while he had struggled with drink over the years, the saddest thing was when he admitted he was in the early stages dementia. At 67!!! Good Lord. But even sadder was that on his deathbed, this young man who had it all - the looks, the talent, adulation, money - his daughter said his last words were "so much wasted time"! Now that is tragic!