As I have mentioned before, my work is very cyclical and right now we are busy gearing up for a big meeting in July. I don't mind at all because I hate the "down" times and get a real buzz out of being up against deadlines. Ok, I wouldn't want to be like that all the time but it certainly makes the days go faster.

So, what's new? Well although my oldest got married in a civil service in March (they bought the wedding forward in order for Lily's granddad to be there. Thankfully they did as he sadly died shortly thereafter), the big celebration will be in July. As the best man, it was up to my youngest to organize the stag do. I only got to see the one photo posted on Facebook but I saw a couple on my youngest's mobile phone - and it was quite a do! One of the girlfriends found a "Heidi" outfit for him but by the time they had added a red cape apparently he looked more like Little Red Riding Hood. As they were about to set off though, one of the girls decided that his make-up wasn't quite right so they set about putting that right! 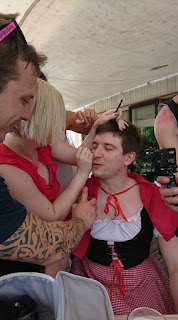 After a few drinks (nobody was driving) they went off to play "balloon football". Berrrrrkkk. The thought of a few drinks in me then running round a field playing balloon football doesn't bear thinking about, but apparently he was fine (at that point at least)! 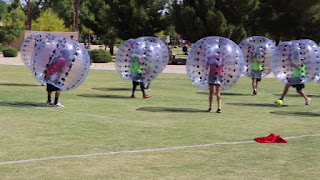 Next up was a trip to the local go-kart place where I'm given to understand his stomach didn't make it past the finishing line at the same time as the rest of his body! Oh well, you only do it once right? That's where he lost his Marilyn Monroe wig too apparently. Man, I have to get hold of some more photos!

After that it was back to Max's place (he of the tattooed arm in the photo) and BBQ and partying till 5 a.m. when they all passed out until about 2 o'clock in the afternoon. All good fun I guess. On a side note, Max is a friend of both my sons as they play in a band together. His father has his own plumbing business and took my youngest on as an apprentice a few years back, so technically Max is Jordan's boss too. To give credit where credit is due, Max bought a run down old house on around 10,000 square metres of land and over a period of about three years has slowly done it up to what is apparently a stunning home now. Not bad at the ripe old age of 27 but hey, he put the hard work in and is now sitting pretty, something I hope my youngest will be able to do in a few years when he has acquired more skills.

After that it was Jordan's turn. He turned 25 last Wednesday so his girlfriend organized a surprise party for him at a bar about 200 metres from their home. She got him there by saying that the bar was doing a special that evening and how about they just go out for a quick drink before dinner. Well when he got there she had arranged with a whole bunch of his friends to be hiding inside the bar! Apparently they had a great evening! 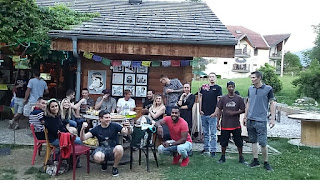 It's so nice that these kids have been friends for so many years and still make time to get together or go hiking or skiing when possible. The bar is called the "684" because it is 684 metres above sea level, just in case anyone is asking!  Oh, and the handsome young black man kneeling down in the red T-shirt is my friend, Stan's, son, the professional rugby player. And again, another party. Daniel had been chosen to play for France in the rugby sevens held in the UK the week before so his girlfriend organized another surprise party last Monday for when he got back. Lovely times indeed!

In other news, I am starting to see all the little things that need fixing up in my house and realize I should get round to having them done. So a couple of weeks ago I had the chap who painted my house take a look at my external balcony, which is in a very sorry state. The cement had started to leak and the underside paint was starting to chip because of it. It didn't make any difference to the inside of the house but it was looking pretty shabby. I was therefore somewhat shocked when he came up with a quote of €1,800! I mean the balcony is probably only about 7 square metres and I am not asking him to do the barrier at all. So thinking that was a ridiculous quote I went out to the DIY place and bought a few basic supplies to have a go myself. Cost me €140 for the lot and that included some of the tools that I would need. Anyway, while I was chipping away at it my doorbell rang and my friend had sent over a guy who does work for her - reliable if a bit pushy. So I asked him to take a look but made the mistake of telling him what the other guy had quoted. His response was "oh, that's about right, but did he mention you would have to do this, and this and this too?" Turns out his quote would come in at around €2,000 but he "would do a better job"! So still not convinced, next time I went up for a drink at Stan's I happened to bump into Philippe, who is in the business, and asked him to give me a basic quote "off the top of his head", given that he knew my house and had already seen my balcony. He came up with about €400, and that included the supplies! When I showed him the written quote I had he nearly fell off his chair. As he said, "they can see you coming can't they!" I hate the thought that these people are taking advantage of me (a) because I'm a woman and (b) because I'm alone. So to make a long story short, Philippe is going to come and do it for me - we just have to set up a time.

And on the subject of the balcony, the wooden barriers are also pretty shabby having been exposed to the elements for so long. My sons have a friend who has his own sheet metal business so tonight he is coming to give me a quote to get that done. My house looks out onto a dairy farm so I have an idea of what I want for the balcony itself.  What do you think? 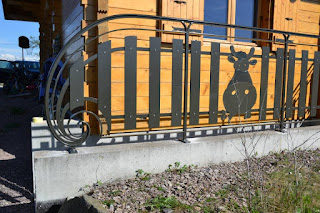 And I want him to give me a quote for putting in a gate at the side of my house. So far my gardens have been totally open but as they are building more and more in the village and I have had a little sod come into my back garden and steal my decorations (the neighbour caught him and gave him a bollocking), I think I may as well go ahead and get the gate put in. At least that way it would be "fenced off" from the front, even while still being open at the back, although to get into the back they would then have to go through two other neighbours' gardens. For the side gate I have seen a picture of a gate made by this same young man with a cat chasing a mouse. We'll see - I guess it depends on the price!

As I said, all the little bitty things that need doing around the house have been getting to me, so amongst the pile of junk in my basement I finally managed to track down my ex' heavy duty drill. Over the course of my travels I have picked up lovely little souvenirs that I wanted put on my walls but never got round to it. Well now Jordan has shown me how to get the drill bit in right (yeah, I'm that good), last night I decided to get a few pieces put up. Trouble is, all my souvenirs stand a chance of being put up at eye level because I "ain't getting up no ladder!"

And finally, a bit of a rant. I don't rant very often and tend to keep my political opinions to myself but I was horrified at the insensitive, oafish tweets that the tangerine buffoon posted about Sadiq Khan, the Mayor of London, in the aftermath of the latest atrocities. I don't remember him being so offensive to the Mayor of Manchester - oh right, Sadiq Khan is muslim, not that that's got anything to do with it of course. Thankfully, people have come out overwhelmingly in support of Sadiq Khan, who at least knows how to conduct himself with class, which is more than can be said of you-know-who! And to think he has the code to the "big button"! It's downright scary!