I was sad to learn that former Blue Peter presenter John Noakes died this week at the age of 83. I understand that he had been very ill with dementia and that it was in so many ways a relief, but I have such fond memories of watching Blue Peter as a little girl, it just seems to be the end of an era I suppose. For me, John and his lovely dog, Shep, were the highlight of the programme and if I am having vague rumblings about getting a dog when I retire, Shep is the one I want!  Rest in peace John and thank you for so many wonderful memories.

And the infamous elephant scene:

In other news, the weather here in Geneva is absolutely glorious, if a little hot for me, so as usual it was out and about this weekend at a local flea market. I look at it as having a lovely day out for a few euros, bring home some junk, and then give most of it back to charity in about a year's time. So an economical day out, right! Sunday was the first time I had ever been up to Groisy, and I have to admit, if and when the time comes to downsize I would definitely give Groisy a thought - the only downside possibly being that it is at an even higher altitude than where I currently live so not so sure about driving on snow in later years.


We had a wander round the flea market and while I was happy with my haul we were both glad to get out of the heat! 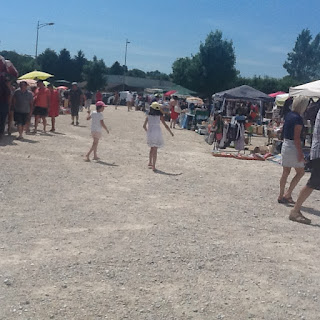 And moving swiftly on, I was able to get off the bus and walk to work this morning from the train station and for once chose to walk through town to check out some of the shops. It's amazing what interesting little places you miss when you are always on the bus and I noticed quite a few "newbie" shops that might merit further inspection. The Geneva authorities give parts of the park over to wild flowers, which were stunningly beautiful, with some giving off a lovely perfume - so yes for once I did take time to stop and smell the roses!

In other news, I have been feeling particularly lacking in energy lately (probably due to the humidity) so last week I decided to have another shot at going vegetarian. I had done this twice before many years ago, and well remember how much energy I had after the initial few days of feeling yuck. And true to form, for the first few days I am feeling a bit light headed but otherwise it hasn't been difficult so far. "If it was so great why did you stop?" you might ask. Well I was much younger then and was thoroughly defeated each time by a full English breakfast whenever I went home. This time who knows what will happen. I like to cook and love veg and pulses and so on, so, as I said, it hasn't been difficult so far. Just hoping one of the side-effects will be weight loss. We'll see.

Oh, and I think I have found an outfit for the wedding in July. I have ordered it and everything else I have had from this company I have been very pleased with so I am keeping my fingers crossed.

And finally, Anne's "Train Wreck Tuesdays" posts about verbal dueling with her mother got me to thinking about an only slightly related incident with my own mom many years ago. I remember being in her kitchen in Dorset when she commented that "they don't make fridges likes they used to, you know." So when I asked her why she said "see that fridge, we bought it when you were three and it's still going"! I was about 50 at the time, so yes indeed it was impressive. Or maybe it was really that nobody liked to point out to her that the fridge had probably conked out 30 years ago, but England being cold in the summer half the time she had probably never noticed! Ah, God love her!