What we women have to put up with!

At my latest gynae check up last week he pointed out that it was time for another mamo (every two years in my case). I know we all have to go through these things but really .... don't we women have to put up with it! I had dropped my son and his girlfriend off at the airport on Friday and have to pick them up again tonight, so had to bring the car in to work. I hate driving into Geneva and much prefer to get the bus at the border so I can ignore the traffic and read. But today being 1st May and a holiday in France (but not in Switzerland) I thought it would be a good time to try to get a mamo booked up, reasoning that traffic would still be fairly calm today. And wonder of wonders, I managed to get an early morning slot. My appointment was at the clinic where I had my youngest almost 25 years ago and I have to say it is still just as luxurious. I mean, if you have to be in hospital if there is a bit of luxury so much the better right?  In Switzerland we have privatized medicine and by law everyone has to have medical insurance. I am lucky enough to have very good coverage through my employer so have the luxury of being able to use Swiss facilities. I can use French facilities also of course but since I lived in Switzerland previously I have kept some of my main doctors here. The other thing is everything is to hand in Geneva - hospitals, clinics, specialists etc. whereas in France it means running all over the place as they are much further spread out. Of course they are also one quarter of the price of Swiss medical facilities but you can also end up waiting months to get an appointment, so for the time being I will be sticking this side of the border.

Up till now I have always had female radiologists but I don't know why I was so surprised to get a young man this time. I know it's no big deal but I was just a bit surprised. And of course there is always the ignominy of him crawling under the machine to try to push my boobs into the right position for the x-ray. I suppose it could be worse - I mean, if there was a fire alarm while your boob was stuck in that thing then what do you do? Of course he and the doctor were obviously extremely professional but yuck ... I hate those bloody things. Still, it is better to be safe than sorry I guess and I do understand how lucky I am that these things are routinely covered by my insurance.  I also realize I am lucky in that being "stacked" the mamograms don't hurt either. Some colleagues have told me that it is agony, but for me not a bit of it. In fact one friend described it as "open the fridge door, stick your boob in, then slam the door"! She frightened me half to death as I had never had one at that point but now I know it's no big deal!

Anyway, enough about my boobs. One of my new year's resolutions for 2015 was to join a hiking group. I live in perfect hiking country and rarely ever do any walking, so I actually went out and joined three groups. Problem is, I don't think I was specific enough in my resolution 'cos it turns out you actually have to turn up for these hikes, not just join the group! Damn, who would have thought! Trouble is, I am so unfit that what the locals consider "easy" is usually enough to have me on my knees so I wanted to start off really slowly. The other week a colleague mentioned that our local villages had organized their annual hike and did we want to go. So in for a penny, I said yes. It was advertised as being 13 km long but I knew it wasn't going to be a flat 13 km. Nevertheless, three of us set off on Sunday morning to join up with the group. I was quite proud of myself actually because Sunday morning I really didn't want to go, but I knew I wasn't going to be able to think up an excuse fast enough. So we set off to pick up our paperwork from a very well organized meeting spot and headed off. On one side of Lake Geneva are the alps (the side where I live) and on the other side are the Jura mountains, and kinda slap bang in the middle is the Salève. The first part of our hike was up the Petit Salève, which actually wasn't too bad.

Then back down to one of the local villages where soup was available for those who wanted it. At the entrance to the "soup kitchen" there was a display of old photos and a lovely elderly man representing "Friends of Old Monnetier" who took the time to explain all the old photos to anyone who was interested.  The trip back through the villages was lovely with tons of wisteria everywhere - apparently the area is known for it. At one point we came across a house with a plaque on it saying that Richard Wagner and John Ruskin had lived here (although not together!).


I suppose in the olden days it was common for wealthy people to travel to various beauty spots to take the air, take the water, etc.. The Salève would most likely have been visited for its pure air and is en route to Chamonix/Mont Blanc, although what we would cover in probably 90 minutes by car must have taken them days!  On the way down we came across a lovely tree stump that someone had taken the time to make into a "hobbit house"! 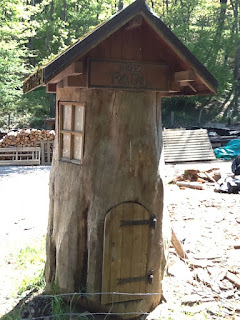 After that we headed back towards another village called Esery. This was somewhat flatter but at this point we were starting to flag.

Since it was no longer "fun" we decided to call it a day. So we trecked back to K's house where she had tea and the most wonderful apricot and almond cake waiting. While we didn't make the full circuit (we managed about 11 km), I think we were all pleased with what we managed to achieve for our first outing. The old bones are creaking a bit this morning though!