Ha - and only yesterday I was saying I didn't mind coming back to France since the weather was so glorious. So what did it do? It started snowing again! Wasn't expecting that at all! When I woke up this morning and raised the black-out curtain in my room (covering the velux in the roof) it looked like it was all frosted over, but when I opened the bathroom shutters it was bucketing down snow. I couldn't believe it. I mean really, really thick snow. Damn! To be honest, I knew it wasn't going to stick and I'm pretty sure that when I get home tonight, while there may still be snow in the fields, there won't be any on the roads - at least that's the plan anyway. The good news is that glorious weather is again forecast for the foreseeable future. I hope so anyway, because I planted my first tomato seeds last weekend and while they are sitting contentedly in front of my living room window, getting more snow really does feel like taking a step backwards!

Anyhooo, moving seamlessly on, one day after coming back from the beach in St. Lucia I realized that my iPad had gone bananas! I had it well wrapped up, inside a bag and sitting in the shade, but when I went to turn it on I got this kind of screen.

I reckoned it must have either got sand in it or maybe had suffered from the heat. So I messed around with it for a bit but there was nothing doing. Bloody hell, there went my chance of taking more pictures etc. and I have to admit I do enjoy maintaining contact "with the outside world" when I am on holiday.  Not to mention the unappealing thought of having to shell out another wad of cash to get a new one on top of the obvious expenses of the holiday. 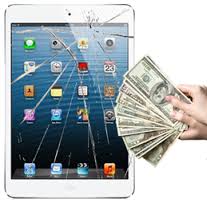 By now I was resigned to my fate though and since I had a couple of days before I went back to work I thought I could run down to Annecy and pick up a new one. I don't know why but the night before I googled "how to repair an iPad" and there were various Youtube videos purporting to be able to fix it. The problem was, apparently, that there was a loose connection between an internal wire and the screen (or at least, that's the way I understood it) and in two different videos people were saying to "tap gently here" or "tap gently there". I tried both those solutions and it didn't work. Then another video suggested turning the iPad off and dropping it on the floor. Not exactly hurling it off a cliff in a fit of pique (that can always come later) but dropping it from a height of about a foot onto a carpeted floor. So thinking I had nothing to lose anyway that's exactly what I did - and guess what - it worked! I kid you not, the blooming thing is now working again. So you see, those Youtubers were right and I have them to thank for not having to shell out another small fortune for a new iPad. Thanks guys!