Back to the grindstone

Well it's back to work after two weeks off and time to get my nose back to the grindstone. Not that I am complaining as the weather here is beautiful, except maybe 30 degrees cooler than St. Lucia!

March seems to be the best time of year for me to take time off, firstly from a personal point of view because it gives me a break from the winter and secondly, from a professional point of view, because work starts gearing up after March.

Since it is the ski season here Easyjet do flights to Geneva from a larger number of U.K. airports so in the winter I am lucky enough to be able to get a flight Geneva/Bournemouth for a very reasonable price. Bournemouth airport being only about 30 minutes from my sister's home is therefore great for me. I got to see my 94-year-old mom a couple of times. The conversation is very repetitive of course and to be honest I'm not sure she even realizes I was there but it was good to see her and she looked well. On the Sunday we went down to Weymouth to watch quad bike racing, starting with the youngsters. It was fun to watch, although I suspect an expensive hobby. We were lucky with the weather, which was lovely and sunny although bitterly cold and windy - a great way to get a free facial peeling with all that sand being thrown around! 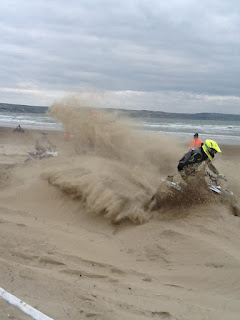 On the Monday I caught the bus down to London in order to spend the night at Gatwick before an early morning flight to St. Lucia. Since I was the only passenger on the bus I got chatting to the driver. He was from Slovakia so we were discussing the upoming referendum on whether or not the U.K. should stay in the EU. With me living in France I would say we both have vested interests in the results of that referendum.

When I got to Gatwick I checked into the Premier Inn at the north terminal and again I was impressed with the efficiency and the overall experience. Again food for thought was that at least 50 per cent of the staff there seemed to be Polish and both the Brits and the Poles really did hustle.The experience was a very positive one and for me at least a great counterbalance to all the negative "anti-immigration" articles you see in much of the gutter press. I have my own views and opinions on the "in-out" debate and will vote as I see fit, but feel that no-one can truly know what would happen in the event of an "out" vote until and if that happens, just as would have been the case with the Scottish referendum. I would be allowed to remain in France in any case and would most likely request French citizenship in the event of an "out" vote but I'm not so sure how things would work out, for instance, for the many British expats living in other EU countries. I guess only time will tell.

On the Tuesday morning I got up and got showered to go to the airport in good time and thought I should just give my hair a burst of hairspray to try to maintain some sense of "polish" (ha - me?) for when I got to the other end. I grabbed a big can of hairspray that I had picked up at home - and proceeded to spray bright blue shaving cream all over myself and the bedspread. Bloody hell - I must have picked up my son's shaving cream by mistake. Cue a mad rush to get washed and showered again and dash over to the airport for my flight!

Once again I travelled with a group of people travelling solo and was not disappointed. There are always a couple of people who you maybe don't gel with but the majority are always, if not fun to be with, at least interesting. Our tour guide Paula was an absolute gem. Not sure I could do that job personally as some people are just downright pains in the you-know-what, but she didn't let it phase her and she turned out to be a wonderful (and very thoughtful) person.

On day two idiot-here spent too long in the Caribbean sun lolling in the sea and got burnt, which meant staying out of the sun for the remainder of the holiday. That'll learn ya! Or maybe not. It seems to be par for the course for me every time. Will I ever learn?

We got to visit a Lucian rain forest and were entertained by a lovely lady called "Mama" who showed us some of the older remedies and traditional "cures", which I find fascinating. 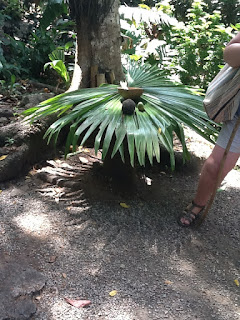 I also got "bullied" by K to sign up for the helicopter tour and zip lining!!!!  I can't believe it.  I really didn't fancy the helicopter tour - or should I say I don't mind the idea of a helicopter ride as long as it doesn't take off! On top of that, I guess I was expecting a bloody Chinook that would seat 20 to 30 people so you can imagine how I felt when I saw the six-seater waiting for us! Yikes!  I have to say though that the ride was very smooth (thank God) and we did get a bird's eye view of the island, although for obvious reasons it was pretty expensive. Still, I guess you have to do it once in your life. 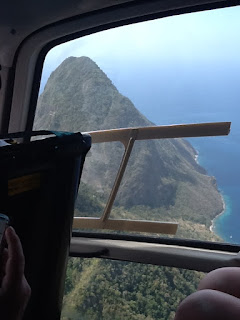 As I said, mad K also bullied me into zip lining. I can't believe I let her do that to me. The night before I didn't sleep a wink as I had visions of throwing myself off something resembling the Empire State Building but it turned out to be nothing like that. When we got to the rain forest they made us put hair nets under our crash helmets to avoid anyone's hair getting tangled up in the zip line and effectively scalping them! Nice thought eh. So to be honest, when we went up in the gondola we actually looked more like flying dinner ladies than intrepid she-warriers. We were well harnessed up and the two young women leading the group did an excellent job. We went up to 1,200 feet and (I believe) the total zip was just over a kilometre long, spread out over eight zips - I'm not sure really as I had my eyes closed for the first three zips! But you know, it wasn't nearly as bad as I thought it would be and I ended up actually enjoying it. In fact, I think I would do that again rather than the helicopter ride, to be honest. 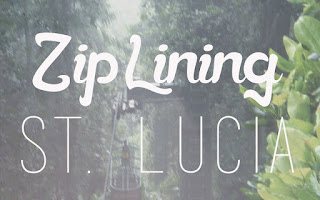 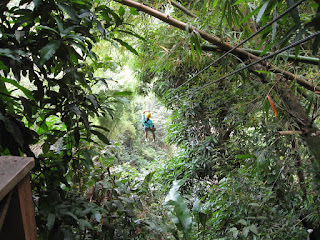 So all in all, yet again a lovely way to spend a vacation. The food was pretty good, if expensive, the island is beautiful and the people very friendly. On top of that I met some interesting and fun people, a couple of whom I think I will stay in touch with, as has been my experience on previous trips. So now I've got to knuckle down and get back to work - and dream of the next place I want to visit. You know, my bucket list of places to visit keeps getting longer with every trip I do - funny that.

I spent a total of 35 hours start to finish getting back home (including a rather long layover in London) but hey, that's the way the cookie crumbles if you want to go on these far-flung holidays.