I took a few days away from the computer again last week so I apologize for my lack of comments on your blogs recently. Yet again I realize I'm spending way too much time online and while for the most part I don't have anywhere to be, I'm aware what a time suck it is. Heck, I unplugged the television in January and haven't plugged it back in since so I obviously haven't missed that, and while I don't want to get off social media/reading online news permanently, I really want to cut it right back, so apologies again for my lack of commenting!
After deciding I was going to "go offline", the other day I ordered some seeds that I wanted from a well-known gardening catalogue here in France and then added to my basket a small greenhouse for either the balcony or my upstairs bedroom (yes, I might put a greenhouse up there as it's a sun trap). But then I had the bright idea of looking up the same greenhouse on other websites and bloomin' hell, the one from the seed catalogue was €50 and the exact same thing at the local DIY store was €26!!! So as you can imagine, I'm going to be doing a bit more shopping around if I decide to buy anything else like that! This was the same DIY store where I bought my generator a few months ago, and while it was already assembled, of course, the handles and wheels needed to be put on it, so I got Jordan to do that for me this weekend while he was over! So I'm ready to go if (when) we get any power cuts. Actually we always get power cuts anyway (a 23-hour power cut just before Jordan's wedding springs to mind), but who knows what the situation will be like this winter, so I'm glad that's sorted!
Last weekend was a busy one for me so I was pretty tired this week - guess I need to pace myself better, but then you can't always choose can you. Heck if I was still married, 29th August would have been my husband's 60th birthday, 30th August was André's 35th birthday, and 31st August would have been my 37th wedding anniversary, so thank God I only had one event to deal with! As it was I kept Charlie on Friday as usual, but the kids had asked me if I could keep him in the evening too as they had booked dinner at a really fancy restaurant. Actually this was the caterer that did their wedding, and in order to get a reservation at his restaurant they reserved it three years ago - at the time of their wedding! I knew it was going to be a long evening! Charlie was as good as gold all day but of course he's a human dynamo too so it's always tiring. I got him down to sleep easily (it's not just me he wears out, obviously), but around midnight he started coughing and crying and I thought he was going to choke so I went in and picked him up. And that was that until mom and dad came home at 1.30 a.m. when they found him sitting on my lap wide awake reading a book! Still he wasn't difficult to put down again and I got home around 2.30 a.m., although I must admit I'm starting to get more uneasy about driving around at night, (a) because of the wild animals and (b) because the Eastern European licenced cars that always seem to "break down" in deserted spots and try to flag you down are back again - if they ever left! I know many of the places where these Mercedes "break down" so try to avoid them, but whichever way I go home from Jordan and Jen's place, I always have to go through isolated areas. The unfortunate thing is, these cars are always licenced in either Bulgaria or Romania - which does nothing to help with feelings of animosity towards perfectly innocent people from these countries, as you might imagine!
Then on Saturday I had people over for André's 35th birthday. It was a lovely evening, I made way too much food, of course, and my fridge is now bursting at the seams with leftovers that I have to figure out what to do with. I bought a ton of cheese for the cheese platter and since I don't really eat cheese I think I might drive over to the kids tomorrow and drop that off at least!
Jordan and Jen stayed overnight because the next day we had our neighbourhood clean-up, where everyone spends about an hour tidying up our little island, which is then an excuse to all get together for a knees-up! It's always good fun and particularly appreciated this year after so long being kept apart! 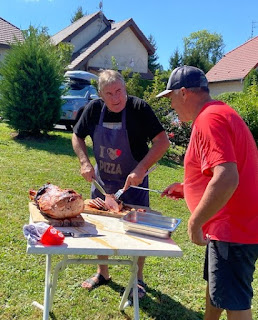 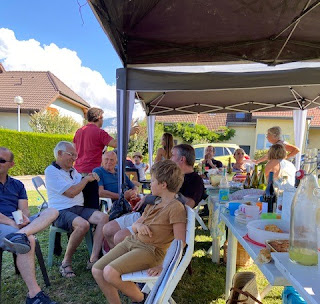 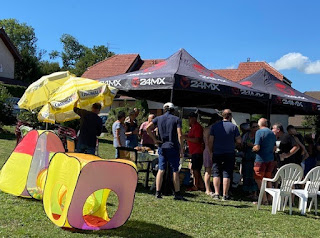 But since I've had a few quieter days to rest, I really must get back to cleaning/decluttering this place. For some time now I've noticed a smell which I haven't been able to pin down. I've always got the windows and doors open in this weather but as soon as I closed up for the evening the smell would come back. Well I finally figured it out yesterday when I looked on the shelf just above my kitchen sink and realized the smell was coming from the two whole heads of garlic nestled up there. Thank God for that - at least it's my garage that stinks now and not the house!
Oh and just because ... I spotted this picture of Annecy the other day, taken I think from the Haute Savoie Tourism website, so decided to post it because it's just pretty. Actually Annecy is so beautiful it's difficult to take a bad picture of it, but here goes anyway!
And I see Bojo used his final days in office to give the British people the benefit of his wisdom on how to make it through what are undoubtedly going to be some very difficult times financially. You see, assuming you have an old electric kettle that gets caked up with limescale, if you spend £20 on a new kettle you can knock a whopping great £10 a year off your electric bill!!! Wow, thank God he pointed that out! So with electric bills going up to potentially £7,000, using Bojo's tried and tested money-saving tip, next year's electric bill will only be £6,990! The man's a genius with his finger on the pulse of the lives of the British people - I don't know why on earth we don't keep him!
On a more positive note, the new Prime Minister, Liz Truss, has already said she will be introducing measures to cap energy bills (or is that just electric bills?) at £2,500 I believe, so that's a start. Whether she'll be any better than Bojo remains to be seen but at least she doesn't come over as a condescending dipshit!
And finally I'm so glad that Liz Truss was able to meet the Queen in Balmoral and be officially invited to form a government - just a day or so before the Queen died! I see people using the word "shocked" to hear of the Queen's death but I can't help thinking there's got to be a better word than "shocked" to describe your feelings about the death of a 96 year old woman! I guess so many people thought she was invincible and would always be here because she always has been here, or at least as far as I'm concerned anyway. She was a class act and I think Charles will have his work cut out to follow that - although he has already promised to keep his nose out of politics, so that's a start! Apart from the many lovely tributes to her though, I thought it was nice to hear all the stories about her wonderful sense of humour. This one particularly tickled me and happened when she was out walking in the highlands near Balmoral with only her long-time security officer to accompany her. What a lovely memory for him!
Posted by Treaders at 21:25