Crikey, it's a feast or a famine sometimes isn't it! One week I'm sitting here doing nothing at all and then the next week I'm running around like a "blue-arsed fly" (one of my dad's quaint expressions)!
Monday morning as usual was my weekly yoga class, and on Monday evening the ladies from the sewing club had planned for us all to have dinner together before sewing starts up as we hadn't been able to make the end-of-year get together. You know how sometimes you go to these things but kinda wished you didn't have to - well that was me Monday evening. But I'm so glad I went as the food and service were excellent and I had a really great time! They are nice bunch, very friendly and we had a good laugh - which is something of a miracle considering what some of those ladies have been going through lately! One lady who I went walking with pre-covid lost her husband suddenly in his sleep last year at the age of 53 to a suspected heart attack. They were estranged and living apart, but were friendly enough. I met him and he was a handsome man and apparently in good health until ....! So you can imagine what a shock it was for her and her boys. As a result of his death his two sons received a small pay-out from a life insurance policy of around €40,000 each, but she started telling me what living hell she has been going through with her youngest son because of it! She was leaving for a long weekend in New York (she's there now) and her sister-in-law, who had organised everything, asked her for a small amount of money (less than €500) towards part of the payment. When she went to her bank her cash withdrawal was refused because - as she found out when she went inside - over 17,000 Swiss francs had been taken from her bank account in the last few weeks! I think she told me this was a disbursement from her Swiss pension and she hadn't looked at that account for a while, so she was more than stunned to find that the money had been taken - and more importantly that it had been taken by her younger son! It turns out that when they were clearing out his dad's house, the son had asked for her bank card to put petrol in his car, must have memorized her pin number and then stole her card at a later date! What didn't make sense though was that he had just received €40,000 from his dad, but when she mentioned that he had just met a young Romanian woman online everything clicked right into place (just like my former BIL who got milked out of every penny by a Russian woman he met online a few years ago)! Oh the Romanian and her son had definitely met up, as she discovered when she found out that he had gone to a fancy nightclub in Geneva and paid SF 1,200 for a bottle of champagne, SF 600 for a bottle of whiskey, and spent a small fortune on a night in a swanky Geneva hotel! And of course, as soon as his money evaporated so did the Romanian girl - who couldn't have seen that coming! What's worrying my friend though, is that the sale of dad's house is due to go through this week and sonny and his brother are due to inherit around €100,000 each from the sale of the land (which belonged to his dad's family) and the three of them will then also inherit from the sale of the house! She's desperate to slow down the sale until they can get his money put into something secure like a small apartment for him, but since he turned 21 last week there's not much she can do if he decides to blow through the whole lot yet again! Geez, what a nightmare - I feel so sorry for her!
On Tuesday I decided it was time to start walking again now that the weather has cooled down, so took myself off to the lake at Passy to do a couple of circuits and it was lovely! At the beach end I stopped and chatted to an older lady who was sitting in a deckchair in her swimsuit debating whether to go in for a swim. I told her I was going to do another circuit and would check up on her on the second round - and yep, there she was swimming. Ha, I thought I was brave just walking so I can't imagine what it would take to actually get into that water! 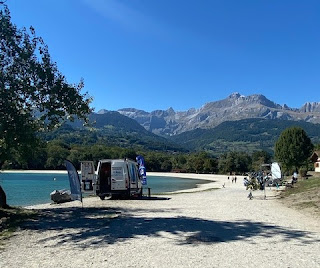