Well the weather finally broke just a little and we had a mild storm last night for about an hour. It brought the temperatures down slightly today but the ground was so dry I doubt it did any real good, that is unless it rains again soon - which doesn't seem to be on the cards right now!

It's been so hot (38°C/100°F yesterday) that yet again I haven't felt like doing much, although on Monday I did manage to make a trip to the tip and also to drop some stuff off at the big charity shop. Since I was out that way anyway I took the back road over to Jordan and Jen's place to check in on Leni, The Horrible Cat! Their neighbours are taking care of him while they're gone but I thought I could take a book and read for an hour or so, in order to open up the place and give him some time on the balcony. In the end I spent 90 minutes there and he seemed glad to get some fresh air, although you wouldn't know it because he still treats me with complete disdain!

I mentioned some time ago that I had received an email from "the gendarmerie in Paris" indicating that they had evidence that I'd been looking at child pornography and to call them pronto if I didn't want the matter to go any further". Well I saw an article in Le Parisien this week where one of their reporters followed up on these scammers and was told he could "pay an immediate fine of €7,000 if he didn't want the matter to be taken any further". So he called them back pleading poverty and they kindly offered to let him pay an immediate amount of €3,000 (with the balance to be paid later) and gave him the bank account details where it should be paid. So they tracked down the female owner of the bank account and as a result up to 100 arrests were made! Well done that reporter! I suppose it begs the question why someone would pay anything to these bastards if they were completely innocent, but I can actually see that some people might be confused or just frightened thinking they might accidentally have landed on a site like that - I don't know really, but all I can say is that I'm glad at least some of them got caught. Now if they could just catch the slimeballs who are "holding my parcel until I make a payment" or the people from McAfee (whose email address reads something like xsajksdkfjasdfasdfjdj182@asdfkdfj.com) and let them know that I haven't used McAfee ever so no, my coverage isn't about to run out, I would be really grateful!

In other news, I called my fuel supplier this week to order 800 litres of fuel and thought the lady was very decent when she asked if I could hang on until I needed to order at least 1,000 litres because I'd get a better rate! It's expensive either way you look at it, but I thought it was kind of her to mention that. She also told me that the price of fuel is currently going down so to keep an eye on the price at the pump and try to time my order in accordance with that! Huh, there are some nice people about aren't there!

I don't know if any of you play Words With Friends but if you do, you'll probably have noticed that after every second play you have to sit through advertising blurb before you can continue. Well I noticed this week that the advertising at the moment seems to consist entirely of a sales pitch for the game Family Farm Adventure and I just realized how awful it is! In one scene a young woman runs in to show her partner her positive pregnancy test and next thing you know he's physically throwing her out of their home into the snow! Then in another scene Mr. Macho is just about to hit his partner (for whatever reason) when the dog jumps up and bites him on the arm! Damn, I hadn't noticed it before, but I can tell you I'm mad as hell to see that these game developers think that kind of crap is a good idea for a game! So guess who's going to be writing them a stinking review!!!

And talking of abusive AHs, I saw a book review of My Daddy Is A Hero - the story of Chris Watts, the murderous pig who killed his pregnant wife and two very young daughters! I've only gotten to the part where they have just discovered the bodies but the book is written to ask the question "are psychopaths made or born?" - which is why I bought it in the first place. That is something that really interests me - but how that monster could murder his entire family because of his infatuation with a skank is beyond me - or probably beyond most of us, I suspect!

In other news Jordan and Jen left Brittany today and are heading south for a few days, and André - as far as I know - is now in Slovenia and they will be making their way back to France via Bulgaria next week. It's all right for some isn't it! That being said, I'm going to check out a few of the "solos" holidays available between now and Christmas and see if there are any European trips I could join up with by driving to meet the group. I've got the travel itch starting up again!

And finally, my friend spotted that there was a pottery market taking place this weekend up at Grand Bornand - which is about 30 minutes from here. Since we both fancied a trip out despite the heat, we headed up there yesterday morning, knowing full well we would most likely ding the bank cards pretty hard but ,,,,! Well the market was pretty small so it didn't take long to wander round but their stuff was beautiful. I spotted a large salad bowl that I fell in love with and intended to go back and buy it after lunch, but my friend trotted over there and bought it for me as an early birthday present (she'll be in Spain for the next two months)!!! Did I need it? Not in the slightest! Do I love it? Absolutely! How lucky am I? 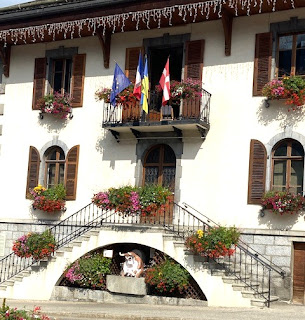 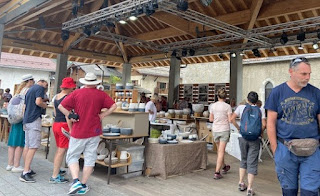 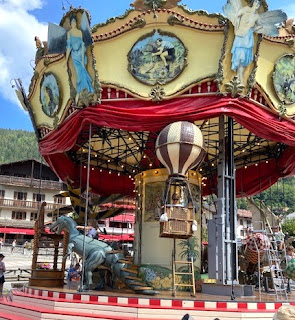 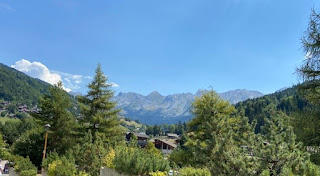 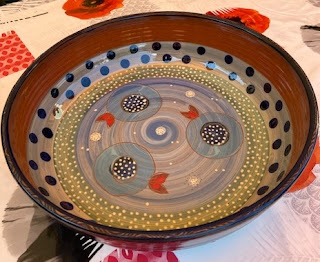