I have been offline for a few days because, well frankly not much has been happening anyway. I don't like the bleh feeling I have at the moment, but when I think about it, I always get like this in the heat of the summer, and boy have we been having a humdinger this year! I don't know for certain but I would guess it hasn't rained for about a month, and we've so far had temperatures as high as 36°C (97°F) round here, bearing in mind that most homes don't have AC! Oh a few people are putting in AC in maybe one room now, but whole house AC, nope! I haven't done it because until we hit 36° I was able to cope with it, you know, by keeping shutters shut and opening strategic windows to create an air flow, so in the end it hasn't been so bad - even if I hate the heat. And to think I was once considering retiring to Spain in order to retire earlier! Ha, the joke would have been on me wouldn't it! Today as there was "a 90% chance of rain" I was almost jumping for joy. And then it happened, all 15 minutes of light drizzle and we were back to where we started. Still, at least for a few days it should be down around 30° so I'll take that!

As in so many countries there have been massive wildfires breaking out in France (in the Gironde they have lost over 20,000 hectares so far). They're also breaking out in other southern départements too, although in one case a volunteer fireman has been arrested for arson! What the flip!!! What kind of lunatic does that? I sure as hell don't know!

Moving on, I had to laugh the other day because I've been watching a British journalist/Youtuber for some time now and I've come to realize he's a bit of a Mrs. Malaprop, not only mispronouncing words on occasion, but sometimes using a completely wrong word. I've often thought "oh he'll cut that and rerecord it", but nope, he just plows on - and I find it pretty great! When I actually looked up the origins of Mrs. Malaprop (Richard Brinsley Sheridan's 1775 play The Rivals, apparently), I came across this quote which was attributed to Mike Tyson - although I'm not sure I'd have laughed at him! 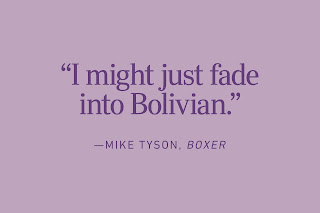 That put me in mind of an incident 20+ years ago where I worked. There was a massive negotiation taking place regarding our pension fund. I was in the thick of it - as a grunt, not as anyone important - but it did mean I got a ringside view of what was going on. Anyway, when the negotiation was finally successfully concluded, the big boss - who was Italian - called the staff to a meeting to announce the outcome. I was sitting opposite my friend when, with all the innate theatricality of an Italian, he stated that "it was the most difficult negotiation in which I have NEVER participated"! Of course English wasn't his first language but I looked at my friend and we both had to put our heads down to prevent from bursting out laughing!

On another note, Youtube randomly suggested to me a video about the demolition of slums in the late 1950s in Birmingham, England (where I was born) in order to replace the many insalubrious homes that were either just old or had been bomb damaged during the war. I had always heard that Birmingham City Council were (and still are, apparently) very proactive and even if some of the high-rise flats were later demolished, I still remember moving out of our house in the city centre into the new "posh place with two toilets", even though I was only three years old when we moved. I honestly didn't recognize much (if anything) from the video but when I sent it to my sister, my BIL knew most of the places shown as he had been a young copper on foot patrol in that area for many, many years! What's weird though is that dad came from inner city Birmingham and mom came from the prettiest little village in Snowdonia National Park (North Wales) and travelling between the two as I was growing up was surreal - but then as mom said, there was no work in North Wales and you had to go where the work was!

Moving on again, I recently received notice that I would shortly be getting the breakdown of my annual electric bill and so far my consumption is down 44%. Yay me, and yay André for moving out. Likewise, my last three water bills went from a consumption of 43 cubic metres, to 51 cubic metres - to 14 cubic metres! Again yay me and thank you André! Mind you, given how energy bills are increasing it's probably just as well that my consumption has been going down, isn't it!

Then the other day I noticed that things had been kinda quiet round at my neighbours, so when I heard her out in the garden this morning I stopped round to see if they were okay. She told me that she had ended up at the emergency room because she'd taken a drink of water and hadn't noticed that there was a wasp in her glass - which promptly went on to sting her in the mouth! Since she is allergic to wasp stings, her face swelled up immediately, the only saving grace being, I guess, that it had stung her on the inside of her cheek and not at the back of her throat! She's okay now, thank goodness, but I'd say that was a close call!

And finally, we had our latest board game evening on Saturday and it was again a really nice time, playing a game that for once interested me called I Know! 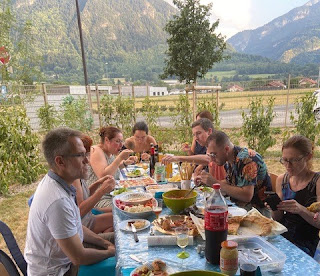 The next day Jordan and Jen set off for three weeks in Brittany, staying with Jen's friend and then moving on to Jen's grandparents! From the pictures/videos they are sending they are having a wonderful time at the beach and it's nowhere near as hot as here! Then this Sunday André and three friends are heading for Slovenia via Switzerland by car, and will figure out a way back depending on where the almost Europe-wide farmers' protests are located (in support of the Dutch farmers) blocking the main highways! I hope they all have a good time, and hopefully with the cooler weather I can get some decluttering and maybe even some walking done too, as I'm failing miserably at that so far this year!