Andy scores an own goal!

For some reason I felt a bit meh last week (better now), so only got the bare necessities done as I wasn't motivated to do much more. Being retired I have the luxury to do that, of course, but I was really annoyed at myself because I ended up wasting a fair amount of fresh fruit and veg that I'd bought the previous week because I was just too lazy to do anything with it. I think part of the problem is that I get carried away when I see all the beautiful produce and think "oh I'll make this, and then I'll make that" and I go into fresh food overload. Since I also tend to go grocery shopping just once a week I have this compulsion that I must buy all the ingredients for everything I might want to cook just in case. Well that blew up in my face last week and I'm annoyed as hell at myself! If I don't shop at the farmers' markets I go to a wonderful shop called Fresh which, as the name would imply, only sells fresh stuff. It's the kind of place where you're just bursting for someone to take a look in your shopping trolley so you can feel smugly self-satisfied because it's full of "virtue", whereas in fact anyone shopping in that store has the same kind of shopping cart because they just don't sell junk. It's all fresh fruit, veg, meat etc. with nothing pre-packaged and it's lovely!

So then I had the bright idea that maybe if some of my shopping choices were taken away from me I might get inventive and actually use up some of the stuff I bought. I've seen UK bloggers talking about buying "no waste" boxes for a couple of pounds - boxes where you have no idea what you'll get but it's heavily discounted because the store needs to get rid of it. In fact France passed a law in January (of 2021 I think) whereby supermarkets are no longer allowed to throw perfectly good food away - they have to make arrangements with soup kitchens or other outlets to take this stuff - or they can offer it to the public at heavily discounted prices. I'd seen a couple of these at LIDL once or twice but they looked a bit mangy, whereas some of the UK bloggers do really well with these boxes. Out of curiosity I googled the Too Good To Go app and bingo, they do the same thing here too - only it's called anti-gaspillage - no waste here - and lo and behold there are maybe five places locally that use this app to sell off goods that are nearing their sell-by date. To be honest I'm not interested in buying bread/pastries because I don't really eat that stuff, although I suppose if I had room in the freezer it might be worth freezing the bread. There are a couple of the health food stores that also do it, and then I spotted a new-to-me store that had no waste boxes available for €6, so I decided to give it a shot. I signed up for one, paid my €6 and had to go into town the next day to pick it up. As I said, this shop is new to me and I was delighted when I found it was an organic bring-your-own-container place, although honestly, I'm not totally sure my little town is big enough to support four of these places. Still, the lady was very nice and went into the back to bring out what she had put aside for me. Now I was expecting maybe a bit of fruit and veg but when I got it home and unwrapped it it contained: 1kg of rice flour, 1kg of semolina, bee pollen (????), organic chicken bouillon and sun-dried tomatoes! Not what I was expecting at all, and when I think back to the UK bloggers planning a whole week's menu around their surprise box I had to laugh because unless I want to eat sun-dried tomatoes cooked in organic chicken stock for the whole week, I'm buggered! Still, as I actually shop in these kinds of places, I was very pleased with what I received and I certainly got more than my money's worth - it was just not what I expected! A local supermarket also recently offered a last-minute no-waste box but I couldn't be bothered to drive down there to check it out. I might do so next time because I'm sure the food bank would be more than glad to receive the packaged/canned goods (if any)! While I can see that prices are rising, at the moment it's not so in-your-face - except, that is, when I went to buy my weekly treat of a Starbucks coffee. Crikey, they used to sell for €2, then they went up to around €2.10 - and then this week they were asking €3.10!!! Sod that, I'm not paying an extra 50% for a Starbucks coffee - they can go off in the freezer for all I care!

Someone mentioned that as a result of her no-waste box she'd decided to cook Jack Monroe's "sort-of paella" so I decided to give that a shot too. It wasn't bad actually, but I would use less tomato if I make it again. But it was good to get back on Jack's site as it was a blog I read quite some time ago when she first hit the scene. Yes Jack is a woman! I remember reading her blog A Girl Called Jack years ago and admired her very much. She was (is?) a single mother who, if I remember correctly, had worked as a fire department despatcher before her son was born. When she tried to go back to the fire department on the night shift in order to accommodate her child-care needs they refused and she ended up unemployed and broke. She was at great pains to point out that while she did not live with her son's father, he was still very much involved with his son, but at one point she found herself with empty cupboards and completely skint. It was at this point that she wrote Hunger Hurts - which kinda took off and fame sort of found her. She is an ardent and articulate supporter of the working poor and did not hesitate to take on MPs who paid lip service to helping but then did bugger all about it. The trolling and hate she received took a toll on her but to this day she continues to fight for the less fortunate in society!

On a completely different note, four of us and two kiddos took a trip out to a place called Le Grand Parc d'Andilly today, which despite the fact that it is only 30-45 minutes from my home, is a total new one for me and it was lovely! It's a fantasy land with giants and elves and goblins set in so many acres of woodland. The website doesn't do it justice because it was so much better than I expected and even if it really is for little kids, I had a great time over the almost seven hours we spent there! 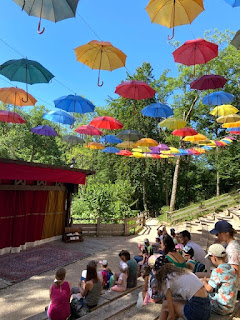 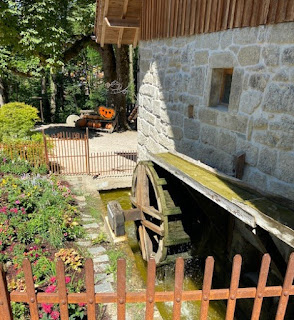 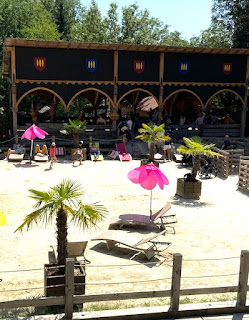 I can't believe I've known about this place for years but never been before. I guess I was thinking it's just for kids (it is) but there really was so much to do and take in that we could easily have spent another couple of hours there if it hadn't been so hot!

And finally, how about that Andy guy then? For those of you who haven't heard of Andy, Halifax Bank in the UK recently decided to spend a fair amount of money to "urge their customers to declare their gender pronouns"!

Well apparently quite a few of their customers felt that Halifax's money could be better spent and wrote in saying that as a bank they would rather that money be spent keeping rural branches open, or maybe lowering their interest rates. To which Andy, from Customer (non)Service replied that customers should feel free to close their accounts if they didn't like it. So that's what they did - in their thousands! One man wrote that he had closed a £450,000 investment with them and some quoted as many as 10,000 other customers followed suit!

Whatever you think about this issue, I'd say Andy has quite a bit to learn about how to address sensitive issues with customers wouldn't you. Anyone want to take a bet on whether Andy still has a job or is now joining the ranks of the unemployed?