Damn, I was tired last week, I guess things started catching up to me. I know so much of it was to do with getting over the birthday party I had here and putting everything back to rights, but I guess I also have to admit that I am 63 and have to start realizing that I don't have the energy I had when I was younger, right? That doesn't stop me half the time but ...! For instance, the day before the party when I was trying to get everything set up, I took one look at the back lawn and thought "oh no, I can't let it go like that"! My gardener usually stops by approximately every two weeks - it very much depends on his schedule and the weather, of course. But my lawn looked terrible so I took a deep breath and wandered over to my neighbour's to ask if I could borrow the new, battery-operated lawnmower that their son had bought them for Christmas. I still have a very good lawnmower in my garage but I haven't used it for a couple of years and that thing is heavy! Well their lawnmower was a delight, pretty lightweight and I got the lawn cut in about 45 minutes. The downside was that the battery only lasts about 15 minutes so I had to use three batteries just to get my piddly little lawn cut! I think if I ever had to go back to cutting my own grass for some ungodly reason I'd get one of those things, though I really have no intention of ever going there! And then, of course, I noticed that the peonies - while beautiful when in full bloom - were making a real mess now that they were wilting, so out came the secateurs and I got those and the rose bushes done too! So I guess there's a reason I was tired, right?

What I hadn't really given much thought to last week was that this Saturday I had volunteered to host our monthly boardgame evening, so here we go again. This time it was easier, of course, because we were only 10 and we've now gotten it down to a pretty fine art, but still, while it was a lovely evening I was really tired today too. I had set up Charlie's birthday present (twin tents with an interconnecting tunnel filled with 100 plastic balls!), but when we went to let him get into it we discovered that there were wasps and creepy-crawlies inside, making that an absolute no-go. So then I had the fun task of picking up 100 plastic balls (seriously, why does any kid need one hundred of those things?) and realized he'd probably be just as happy with about 10 balls in a plastic tub - and he was. Well no, in fact, he was even happier, singing to himself and then turning round to make sure we were all watching as he "made his cake"! He really was enjoying himself! 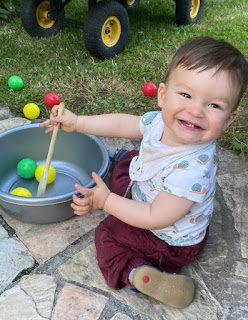 Someone noticed the veggie plants on my balcony and pointed out that there was now a rather nice looking courgette hanging from the balcony where the plant had wound itself back round the railings, so I ran upstairs and "harvested" my first courgette. But seriously, can you imagine sitting on someone's terrace having a nice glass of wine and getting hit on the bonce by a courgette???? We started off having an apéro and eating outside, but by around 9 p.m. some were getting chilly so we moved indoors where we played a few games, with the intention of having Charlie sleep until it was time to go home - but he was having none of it! He slept maybe 30 minutes and that was it - he wanted to be with us! So I spent most of the evening quite happily playing with him while they played their games but I don't quite know how he managed to stay up till 1 a.m. on so little sleep. He's got me beat, I can tell you!

Everyone helped clean up before they left, but of course there's always stuff to do the next day, isn't there. I paced myself better today and worked a bit, then sat and read for a while, then worked a bit, and so on, and in the end it got done. In fact, Isabelle (my neighbour) sat on my tatty old sunbed yesterday and said she could absolutely see why I spend so much time sitting on the terrace as it's just perfect. It has the house's best view and sitting on the sunbed under the balcony out of the sun is just heaven. I swear if we'd gone quiet for a few minutes she would have fallen asleep! I mentioned to her that if she would like a couple of lettuces I had growing on my terrace in my plant pots to come over and get them because I couldn't eat them all, even taking into account that the slugs and snails had had their fill. When she said she'd be over in about 15 minutes I thought "right, that's it, let's get those bloody mattresses into the car before she comes"! You see I'd been to IKEA the week before and bought two new mattresses for my bed and still had the old ones to get rid of. They weren't terrible but every so often I like to get new ones to freshen everything up. Having wandered round (been trapped in?) IKEA for a couple of hours I was amazed at the price of some of that stuff. I don't have any problem sleeping (except when my mind is whirring) so don't need special mattresses or pillows, but crikey, the price of some of that stuff!!!!! My bed takes two 80cm x 200 cm mattresses so that's what I needed to get into my car in 15 minutes to take to the recycling tomorrow. So being nothing if not innovative, I decided to throw the buggers out my bathroom window rather than try to lug them down the stairs! Worked a treat and I now have them both in my car ready for tomorrow - and about a six inch nose space between my seat and the windscreen!

Jordan and Jen mentioned that they were going out with their neighbours today, either to Les Lindarets (the goat village I've written about before), or to the Parc de Merlet (which I don't know), so I might take myself off this week to visit the Merlet in the hopes of discovering somewhere new!

So all in all, it's been nice having a quieter day today. As I was sat in the back garden I heard a birthday party at the neighbours, with lots of kids squealing and playing in an above-ground pool. That's a real treat and will never bother me - it's what kids do!

Oh, and the big news is ... Jordan's been having a hard time with Max (but more particularly his brother, Arnaud) for some time. The other day Arnaud complained that a radiator Jordan had installed under a window was off by one centimetre. Jordan explained to him that he'd had to follow the plans rather than the positioning of the window because that's where the relevant piping was. Then an electrician who was also working on the site walked over and pointed out to Arnaud that the last four radiators he (Arnaud) had installed were the same because he, also, had had to follow the plans, and in any case, who could spot a 1 cm difference? Basically Arnaud told the electrician to f..... off because "Jordan was just a waste of money"! I've been hearing some of the stuff that has been going on over the months and it has really been getting to Jordan, so this week was the last straw. Even more disgusting though are the so-called "jokes" about Charlie's parentage!!!! and Jordan has had enough. So he's drafted his letter and when he gets to work tomorrow he'll be giving them the requisite two weeks' notice and handing in his resignation! Let's see how many "squared up" radiators you get done all on your own then, shall we Arnaud? He's got nothing to go to but there should be plenty of temporary work (have you ever met an unemployed plumber? Plumbers are like hen's teeth!) and since's André's neighbour came back to him again to say to get Jordan to give him his cv (done) as he's got people asking in Switzerland, it looks like things could be all change in the next few weeks! I'll let you know more as and when!