Jen asked me if I could look after Charlie pretty much all day today as she was having to do a split shift to cover for absences. No problem, of course, but getting up at 5.30 a.m. to get there for 7 a.m. was a bit of a shock to the system. Still he was as good as gold and when I sensed he was getting a bit tired, but still too early for a nap (in my opinion), we walked up to the farmers' market in their little town and then stopped off at the park for about 30 minutes afterwards. He loved it as there were loads of kids there today and he got to crawl over (not quite walking yet) to so many of his new best friends and "chat"! After that it was back home for his nap and it was only then that I got to check out what was going on on FB! Crikey, there was a massive explosion right next to Geneva airport today! First I heard was that it was the UPS terminal at the airport, but it was later confirmed to be a building that was being built for asylum seekers right near the airport. No-one was hurt, thankfully, but I have to admit that my first thought was "hmmm, a building for asylum seekers", and then the next thought was simply "I'm glad I won't be sitting in that traffic"! Still, it wouldn't be the first time a building being either built or renovated has gone up in smoke in Geneva! It made me laugh though when I read in the Geneva news that "traffic was only slightly affected"! You've gotta hand it to the Swiss! 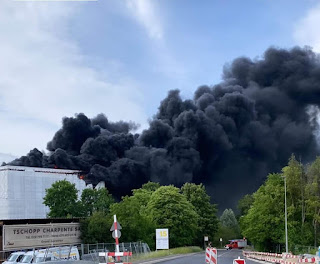 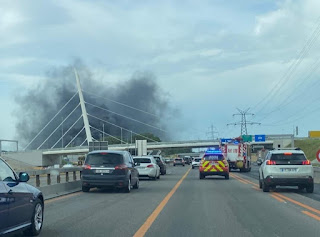 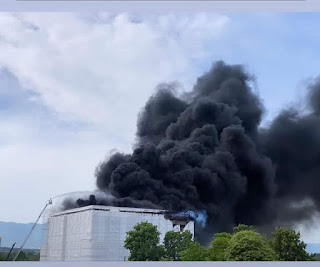 Tomorrow I have a cookery class at the excellent vegan restaurant near here. Their food really is very good and I'm intrigued to see what we will be cooking. Will let you know in my next post!
And, you wouldn't believe it but something that must have been the size of a flying cow has just left me a "gift" on my brand new velux in the TV room. There's just no respect sometimes is there!
Posted by Treaders at 21:16