About 18 months ago I was introduced to a new-to-me vegan restaurant just up the road from here. I've always been interested in vegetarianism/veganism so was delighted to find that their food was actually very, very good! Then of course the pandemic intervened and this restaurant chose to no longer do in-house dining because they refused to ask for people's vaccine passports - so it was take-out only! Anyway, everything opened back up for us a couple of months ago and I saw on their website that they were offering cookery courses, so I signed up and went to my first one yesterday and it was wonderful! I'd been to a vegan class in Geneva a couple of years ago and it was a real disappointment, but this one was everything I'd hoped it would be and more! The lady lives and breathes veganism/organic food/holistic medicine and is such an interesting woman. For the first 30 minutes we talked about why we were interested in it. She said that right from a very young age she felt such empathy with animals that she couldn't force herself to eat meat so vegetarianism came naturally, followed by veganism as she got older! It's a lovely place where they give yoga classes, and reiki and massage therapy, in addition to the restaurant side of things. There were four other ladies, all very interesting too. One lady "talks to animals, plants, trees, etc." and was very into all that stuff, and while she's obviously free to believe what she wants I just wished she'd talked a little less! That being said we were all different but all very accepting of those differences too. In fact, the lady I liked the most has a small farm in the mountains where she and her husband raise animals for meat and the "tree hugger lady" didn't bat an eyelid at it!

On the menu were chilled courgette and cucumber soup, carrot and olive cake and the most delicious uncooked lemon tart (made using avocado as the "mousse")! Everything was really good and our teacher told us how and why she used the different flours and vegetable milks/creams, etc. 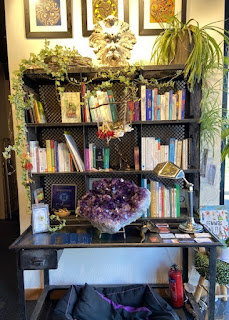 It was such a good time that I was disappointed to learn that they were selling up and moving to Vendée in September!!! When I asked her what they were going to do in Vendée she said she had no idea but as somewhat of a nomad, every few years she felt the need to move on and she knew something would turn up for her when she got there! Apparently her grandmother had been a true gypsy so I guess that is where she got her wanderlust from! Since I'm anything but a gypsy I kind of admire her, but will be very sorry to see her and her little restaurant go! I don't know if you've seen the film Chocolat but she reminds me very much of the main protagonist in that film. That being said, the book is so much better than the film (of course), all the more so because in the film it's the local Mayor that falls under the spell of the travelling gypsy woman, whereas in the book it's the local priest, which makes it that much more "juicy"!

Thankfully there are a few very good health food stores round here but when I asked her where she preferred to shop she mentioned a new Ecoquartier which had been built up the road in Bonneville, on the site of the old hospital. Now I'd never heard of this place so this morning I took a trip out there to check it out. The store was, indeed, lovely and afterwards I stopped in the little coffee shop next door for a drink (and yeah, a meringue cake too), but it did strike me that for an ecoquartier there was an awful lot of concrete! As I was only 10 minutes away from Jordan and Jen's I bought a couple of pastries and stopped over there as I wanted to discuss something with Jen. Since Charlie is only in daycare Tuesday, Wednesday and Thursday, Jen's mom and I take care of him the other two days, with me doing Friday as I want to continue my Monday morning yoga classes. When we were sorting out our schedules though, Jen's mom had a whole list of Mondays where she couldn't take Charlie (she has a boyfriend who lives 90 minutes away and goes to his place, and then they are going on holiday soon for two weeks). Fair enough, I worked my schedule to suit her and cancelled a few yoga classes - except this morning she sent me a message to say she was coming home early from the boyfriend's and could now take Charlie tomorrow instead. While I don't mind accommodating her, I don't want to be forever on the receiving end of moving plans around after they've been agreed, so I wanted to ask Jen what suited her best. I'd planned to miss yoga and have Charlie at my house tomorrow and have set up his little swimming pool, but now that's been changed and we're back to our normal schedule. I don't know, maybe I'm being unreasonable but I don't like making plans and then having them switched at the last minute, especially if I've made my own plans!

Anyway, it got sorted, and then Jen asked me if I wanted to go to visit a snail farm with her and Charlie as they had an open day and it was only 10 minutes away? A snail farm, ehhhh, no thank you, I'm not shoving those things in my mouth! Well in the end we all went and it was a fun way to spend a few hours (not that Charlie cared that much but he was very interested in everyone around him). Oh, and there was no snail eating either. It was just the owner showing how he "cultivated" 200,000 snails a year for the local market. He was good fun and put on a 50 minute show for the kids all about snails. "How do you wake up a snail"? "You shout at him"! Nope, they're deaf, they're also pretty much blind (unless you get to within a couple mm of them), and so the best way to wake them up is to water them (and of course the kids got a good watering too). Then he asked what snails eat and cracked up when one little boy shouted "ketchup"! The really interesting part was when he showed the kids how strong snails are, capable of moving 100 times their own weight - which he proved by attaching a toy car to a snail's shell and they watched it pull the car up the slope. As I say, it was a good show, and afterwards we had a wander round the other stands set up in his field (selling honey, wine, jewellery, etc.), had a quick beer and then headed back home! 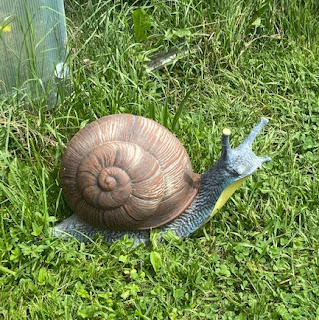 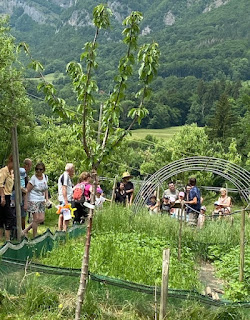 On the way home I stopped to fill my car up. While I was there a young lad on a scooter asked if I could change a €20 note for two tens as he wanted to put €10 in his scooter. I knew I hadn't got any change so told him I'd fill his scooter up for him. Crikey, you'd think I'd given him the world, he was so grateful!

When I got home I went round the salad plants I've got potted up on my garden wall, picking off slugs and snails before they could do too much damage. Oddly enough it seems that the best deterrent has been the smashed up egg shells I've got scattered round a couple of pots, so I'll be keeping any and all egg shells in future - or at least until this growing season ends. I had to laugh when I went to throw some stuff in my compost bin though, because some time ago I'd dumped a whole bunch of potato peelings in there - and now it looks like I've got a compost bin full of spuds! I'll have to wait till I dig them up but from what I'm seeing right now I needn't have wasted my time planting potato seedlings in my raised beds if all it was going to take was to drop the peel in the compost bin!

Just as I was starting to think about dinner there was a knock at my door and my neighbour walked in with about 10 bottles. Here's me thinking we were in for a good time tonight, so I was disappointed when she asked if she could fill them up with water as their water heater had blown and they were having to empty the tank to fix it! It ended up with her very embarrassed daughter coming over to my place for a shower, although when I offered to give them my spare key they said they'd be ok as they were hoping to fix it by tomorrow. While I wish I'd already gotten my bloody bathrooms done, I was so glad I'd made the effort to clean all the upstairs rooms thoroughly this week. I guess it's just like your mom used to say - always wear clean underpants because you just never know!

And finally, I don't know if I'd mentioned before but I decided to start using my lovely sunny balcony as a place to put my other home grown veg hopefuls since I never use it. So far I've got 11 rather nice looking plants out there (tomatoes, courgettes, hot peppers) and you know what, there's not a single slug/snail on them. So it would seem, that planting them on a first floor balcony is an even better slug deterrent than scattering crushed egg shells round your plants. Beat that ya buggers!