I've been offline completely for a few days again as I felt I needed to take a break for a little while - I find it does me a lot of good. In fact I've actually just realized that I unplugged the TV about three months ago when the guy came to look at replacing my windows and I haven't plugged it back in since, so I guess I might not need that either!

I did watch a brief Youtube video recently though where a Canadian immigrant (from Tanzania, I think) filmed around his local area pointing out how no-one was outside and saying that in his country everyone was always outside chatting and so on. Of course a huge part of that is if you live in a cold country you're hardly gonna be sitting on your doorstep chatting are you, but I got the point he was trying to make. When I was very young, before the council demolished our homes and moved us into new homes, I vaguely remember the women sitting outside chatting while the kids played "in the square". That happened also to a certain extent in our new home too, but much of that seems to have gone now, and I think it's a darn shame because you lose that sense of community! Oh I get it that nowadays most families have both parents working outside the home so who has the time to sit outside and chat, right? But it was brought home to me today when I bumped into a neighbour at the mailbox (she lives a little way away from me) and we had quite a bit of catching up to do. She asked if I thought we'd be having our neighbourhood clean-up/shindig this year and I told her I'd already spoken to the Chairman of our Homeowners' Association and yep, we'd be doing it. Of course winter and covid put the knackers on so much so I think we're all looking forward to meeting up again and having a chat and a drink on the little island in front of our homes. She also told me that the people at number five had moved out and I was quite shocked as I hadn't known. Now to be fair they had always been a very discreet couple but over the years the wife had gotten sicker and sicker (diabetes, I think, but at the time I had thought it was dementia) and so many years ago refused to leave her home at all, which meant that the husband had to do everything, including taking care of her. I barely knew him but had heard a little of what he was going through and my respect for him was enormous. So to hear the wife has now been moved into a care home in a village not far from here and he has found a small apartment nearby makes me so happy for him, as it can't have been easy these past few years, even if their two children visited regularly!

In other news, I decided to take a run out today as I wanted to drop off my recycling and get a baguette from our little local bakery, but I got quite a shock when I pulled into the next village to find that the bakery has gone out of business!!! They've been there the 30+ years that I've lived here and the place was absolutely picture-perfect. In fact I remember when Steve visited a few years ago he commented that it looked absolutely how he had pictured it in his mind! It saddens me to think of the two local corner stores that have also gone out of business recently due to the arrival of a much larger chain store a couple of years ago, but it is a conundrum because I guess we all like the efficiency and pricing of places like Amazon (and Walmart, I'm led to believe) and yet we know that they are putting small mom and pop stores out of business and, from what I hear, don't treat their staff particularly well either! How can the little people ever hope to compete?

Charlie looks to be as fit as a fiddle again now, after his bout with conjunctivis/an ear infection/roseola and chickenpox! But when the roseola didn't seem to be going away a couple of weeks ago they ended up at the emergency room on the Sunday night and it turns out the poor little thing is actually allergic to the antibiotics the doctor had given him for the ear infection!!! Still, I suppose you have to find out one way or another and it's good to know, right!

My sister headed off to their house in Spain 10 days ago and after she'd arrived safely I found out they'd actually had an accident on the way to the port in England. Apparently a motorbike had come belting up the line of traffic crawling it's way to the port, spotted an oncoming vehicle and screeched back into his lane taking half the backside of my sister's car with it. My sister and the man in the car behind started directing traffic, while my BIL tended to the motorcyclist. The ambulance arrived pretty quickly and as he was apparently not badly injured they were able to continue their journey in their smashed up car and made it in time to catch the ferry. Thankfully the car behind them had a dashcam so it will all be taken care of by the motorcyclist's insurance, but since then I've been thinking it might be a good idea to get front and back dashcams too, because if you're ever unfortunate enough to have a need for them they must be a godsend!

I had yoga Monday morning and while we were waiting for a few more people to arrive our teacher was saying that after two months with her Ukranian guests, she really was looking forward to having them leave while they could still part on good terms! One couple had found jobs and gotten an apartment and the other three were moving into a large house that had been provided by the local commune. Frankly I think our teacher is a saint but she said it was even enough to try her patience as they got up late, started cooking lunch around 4 p.m., were noisy and went to bed very late. She also said that nobody took any notice of the fact that a household that size could only run if everyone pitched in and helped with the housework, so, as I say, she will be very glad when they move out! One man fell off his bike last week and was going to have his shoulder operated on the following day so she was already thanking her lucky stars that she had gotten his medical coverage sorted out immediately upon arrival! I have another friend who had taken in three Ukranians and when I asked him how it was going he just said "tricky", so I left it at that. Two of the ladies at our sewing club said the same thing, so while I think it was very altruistic to have done what they did, it hasn't been the roaring success that so many imagined, going by what people are saying!

The other Sunday Jen and I took Charlie up to a vide-grenier in a local town, although I think calling it a town is a bit of a misnomer because it's more like just one street! Still, it was warm and sunny and we had a nice few hours out. At one point Jen stopped to buy churros but when she spotted that they were €6 for 10 she walked away. Apparently they used to be around €2/€2.5 so I guess the price of the frying oil has really gone through the roof! They had a few fair-type things for the kids and an oompa loompa band which fascinated Charlie, so it turned out to be a nice way to get out of the house for a few hours! 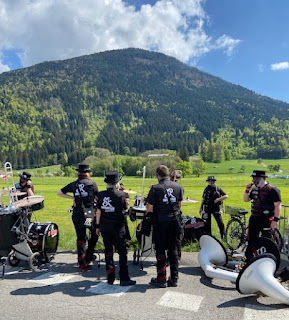 And finally, I got this hairbrained idea into my head that I was going to build my own makeshift greenhouse! I know, mad right! So I went out to the garden centre and bought myself two pointed stakes about 4' long and two more about 7' long (I looked like I was going pole vaulting when I carried them to the car). So here's me thinking I can just "tap" them into my rock solid garden with a lump hammer! Well of course that didn't work, so I got the sack of cement out that I just happened to have handy and gently dabbed a little cement around the base of each stake. After leaving it to set for a few hours I went back out to check on them and the bloody things had fallen over (I guess one of the neighbours sneezed) because I'd cemented them to the grass!!! So there was nothing to do for it but to start digging four holes, load them back up with cement and pray. It's not ideal but it's definitely an improvement. Then I placed cardboard down inside the confines and have started fixing ("fixing" being another loose term for what it actually looks like) chicken wire around the outside. I've yet to finish it but the whole thing looks so saggy even I have to laugh. In my mind's eye I knew exactly what I wanted but apparently my mind's eye might need new glasses! If I ever get it finished I'll take a photo of it - I'm pretty sure it'll give you a good laugh!