In praise of the stay-at-home mom (or dad)!

I've been taking care of Charlie full-time this week as the crèche closes for the month of August and Jordan and Jen only start their vacation (they're off to Brittany) next week. Now that he's well again he is his usual adorable self but I'd forgotten just how hard it is taking care of a baby full-time. You can't do anything on the spur of the moment and have to plan everything around the baby's schedule! Plus if you do have to go out you basically end up packing for a Himalayan trekking expedition! Oh I know you build up to it and you definitely develop a routine as time goes on with your own kids, but it brought back to me just how hard a job being a stay-at-home (SAHM) is! I would have given my right arm to be a SAHM, but since I earned more than my husband and I was the one with the wonderful expat benefits it wasn't to be. Ultimately the fact that I kept my job worked in my favour because I was able to comfortably divorce my husband (receiving no spousal or child support of course) when he decided the bar room skank was a better fit for him (she was)! More than once I've wondered where I would have ended up if I had stayed home with my kids with no income of my own, only to be abandoned for a skank at 51. Thankfully I never had to find out!

Of course working full-time with young kids I, like so many others, had the constant pressure of having to run, run, run and the stress of keeping all those plates spinning was tremendous - as any working mom knows! But to anyone who wonders "what on earth SAHM's do all day", I would just say try it for yourself and then get back to me in a year's time! Because of course it's not just about the kids is it. There's the cooking and cleaning and shopping and homework and all the other duties that usually fall to the person that stays home. It can also be mind-blowingly stultifying to sing Old MacDonald Had A Farm on an endless loop to try to calm a cranky baby (ask me how I know - tee hee - at least Charlie knows all the names of the farmyard animals in English at this point)!

At one point, when we were in the thick of raising kids and both working full-time, I spoke to my husband about the possibility of him giving up work to stay home because I felt that if we were careful financially we could have pulled it off. Trouble with that was the words "financial prudence" and "my husband" should never feature in the same sentence - as I learned to my cost after getting married. I mean this was the guy who, while drunk, went out one Saturday afternoon and bought himself a car (on credit, of course) for €40,000 (which was around $60,000 at the time), while I was driving a car that would generously be valued at around €1,000 in the divorce!!! So no, we would quickly have gotten into a real financial mess if he had given up work and we depended solely on my income. The other problem with having him being a stay-at-home dad was that I learned - through experience when he lost his job in the US - that his idea of being a SAHD was feeding the baby and maybe making dinner - but that was it. I remember coming home from work one night and he hadn't washed or dressed the baby at all that day, the washing was piled up and he was doing his usual, sitting there playing guitar. For him, as I say, being a SAHD didn't involve grocery shopping, cleaning, ironing or anything other than - well "staying home", so I dropped that idea poste haste! It was a shame though because I always felt life would have been easier in so many ways if one of us - it didn't matter who - had been able to stay home! So having spent a few days with Charlie, who I reckon needs an inordinate amount of sleep at the moment, it reminded me again of just how much "unseen" work stay-at-home moms do, Ladies (and the occasional gent), I salute you!

I used to follow Katie Kirby's blog "Hurrah for Gin" years ago, and I think she captured what was often the real truth about what it's like staying home with young children! 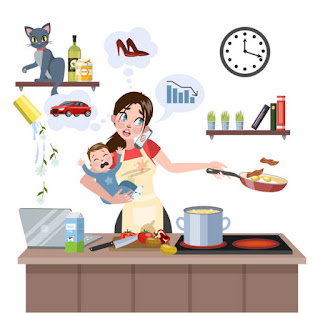 In other news, André got the keys to his apartment on Tuesday so I packed for the aforementioned Himalayan expedition and took Charlie over to see it - and it's just lovely. It's on the top (second) floor of a small, new build apartment block about 30 minutes from my place.

On Wednesday most of his furniture was delivered and assembled, with more being delivered today. The kitchen will only go in next Tuesday but he said it is already looking good. Unfortunately he can't get a wifi connection before 18 August as so many people are on holiday, so he was initially thinking he would have to continue to work from my place. But with Jordan and Jen being away as from next week they asked him to move into their place until they get back - which works out well for them also because he can take care of Leni, the horrible cat! Seriously, this cat is a nasty piece of work who would scratch you rather than look at you (thankfully he's ok with the baby so far). I mean, the other day I had put my bag on the table with my car keys next to it. Well Leni has a handbag fetish and is forever sniffing around it. As I wanted to leave I managed to nudge my bag away from him, but in order to get my car keys I had to go get a large hooked pole (you know, the kind you close roller blinds with) and surreptitiously hook my keys away from him! The good news is that with me going over there more often to take care of the baby he now just treats me with mild contempt - and I can live with that because the feeling is mutual. But André has a better relationship with him as he lived with J and J for three months so I guess a short period of cohabitation between them will work out okay!

So I'm really pleased to see that things are working out well for him and he's happy. I was asking him about work the other day and apparently he is good to work from home (primarily) for the next four years, because his employer is renovating their main building with a view to getting rid of an annex and what I presume is a ridiculously high rent. Of course he and the rest of the staff will have periods when they will have to be on site (and he is happy to go in to work anyway), but to be able to telecommute pretty much indefinitely will be a dream come true (if he did but know it), given the horrendous traffic problems we have round here. Heck, I was only asking for the occasional telecommuting days and my boss refused - hence I handed my notice in two years earlier than I intended to. But then whaddayaknow, a few months later the pandemic arrives and everyone has been telecommuting ever since. But, as I've said before, I don't regret quitting because the freedom I have gained was so worth it. And now I'm off to sing Old MacDonald to try to get the Munchkin down for his nap! Freedom? What freedom? Did I say freedom????