Well summer seems to finally be upon us, arriving in one fell swoop since last week and it's scorching here. While it's been a pain in the butt to have had so much rain for so long, I can't say I mind having missed out on these temperatures for the last six weeks or so as I just I can't take it. Which I guess is kinda sod's law that André and I ended up moving the vast majority of his stuff out to his new place this week. On Wednesday I was up and down stairs like a mad woman, packing and loading stuff and then in the afternoon we went back to the store where he bought most of his furniture to get a few extra items (coffee tables, book cases, shelves for the garage) and by the end of the day we were both wrecked. Then on Thursday I took him to a store where he could get most of the remaining stuff he needed (you know, like trash cans, linen baskets) at a reasonable price, a quick drive through Mickey D's for lunch and then back to his place to unload. Friday I told him he really needed to get some grocery shopping done because the truckers' union had threatened to bring the country to a stand still starting this weekend over the pass sanitaire and he might not make it out his front door. Oddly enough it hasn't happened because Macron decided that truckers (along with the police, the military and politicians???) should be exempt from being required to have this vaccine for their work and their truck stops/watering holes would also remain open to them! So there's method in his madness because (so far) they haven't gone on strike, but the fact that those four categories of people will not be required by law to get the vaccine proves - to my mind at least - that this pass is anything but sanitaire! But ... I digress. So I showed André where I got all my fresh stuff if I didn't want to go to the market, then on to the frozen food store which is excellent (I'm sensing he will be living at this place), and finally to the regular store for the rest of his stuff. Now this supermarket chain regularly has promotions whereby you get a sticker for every €10 you spend and it enables you to buy other goods at much reduced prices. They were doing that with wine glasses and then Tupperware recently, but I only collected the stickers because my neighbours wanted them. But this time they are doing a good deal on towels and for 10 stickers and €10 you can get one very good quality bath towel, so I started collecting them thinking they would come in useful for André. Well I had parked and gotten there before him and while I was waiting a man came up to me and asked if I collected the stickers only he had a whole pile of them and had no use for them. When I said yes I would be glad of them he handed me an envelope full, so André now has a whole pile of bath and hand towels on order for about a quarter of the regular price. I hate to even think what he has spent this past week though, but he's keeping track of it and said he is still fine. I sure hope so!

Then yesterday I went over to Jordan's to make sure Leni the horrible cat was ok and decided to spend an hour there with him reading (me, not him) so that he would have some company. Can you believe I even gave him cat treats and the little rat still treats me with utter contempt (well after he'd had the treats that is). Oh well, I did my bit, cleaned up his food and put fresh water down for him and heck, I even emptied the cat shit out of his litter and there's not one bit of gratitude! While I know most cats are more affectionate than Leni, it just confirms to me that I'm not a cat person as I don't want to go shit shovelling for an ungrateful cat, and in the end, although I like dogs more, I really don't want to do it for dogs either, so that, at least, has put any idea I might have had about getting a pet to rest!

After that I went back up to André's (he was out running around) and spent about five hours emptying boxes and putting stuff away in this bloody heat! Man does he owe me big time. But you know what, I love his apartment and it's giving me vague thoughts of "hey, why don't I move too"? I'm very impressed with the builder and who needs a house when a two or possibly three-bedroomed apartment will do the job just nicely? I reckon I could sell this, buy an apartment and walk away with about €100,000 so it would make sense too.  Hmmmm, has the seed of an idea just been planted?

Now I love where I live, the village is beautiful and my neighbours are great, so there's that to consider, but more and more I like the idea of being able to at least walk to a shop or a restaurant rather than having to take the car everywhere. Oh I wouldn't get that where André lives either so the choice of location would have to be carefully considered, but I'm beginning to like the sound of it. Of course it would mean some serious down-sizing/decluttering this end, so with that in mind, after I'd finished cleaning today I worked for about two hours sorting and putting stuff aside for either André to take or for Goodwill! We'll see I guess, because this burst of enthusiasm has so far lasted 24 hours. I really do love this village as it is so picturesque but who knows what the future holds. It's kinda exciting just thinking about it all the same!

Jordan and Jen leave Brittany tomorrow and will drive through the night in the hope that the babe will get as much sleep as possible. They've had a great time and wonderful weather, although Charlie didn't like his first experience of the sea - he was afraid of the waves! 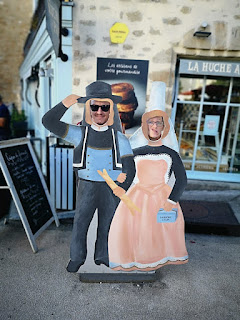 But talking of the heat, I saw on the news that Syracuse in Sicily has just registered the highest temperature in Europe (I believe) - 118°F!!!! Wow, it was scorching the day I visited and it was nowhere near that temperature - but what a stunning place that was!

I bumped into my friend at the mailbox the other day and we were discussing her upcoming trip to Spain (I'll be taking her to the airport) and I was saying how much I would actually like to go back to the UK and travel around, something I feel Steve and I would have done together if he hadn't died! She feels the same as I do in that when we used to go back home, it was always to see family, so you never really visited other places and there are so many places I would like to explore. André and Lily fell in love with Yorkshire and the Isle of Skye on their last trip to the UK, and my niece has just spent a week in the Lake District (I have fond memories of Youth Hostelling there) after which she and her family made their way slowly back to their home in the south of England, stopping off in various beauty spots for a night or two on the way back. She always takes loads of photos and it's really whetted my appetite to go back home whenever that might be possible and do a long trip! It ain't happening yet of course but it's nice to dream isn't it!