A semblance of normality!

So Biden and Putin met in Geneva today and, as would be expected, half of Geneva was closed off and it must have been pretty damn miserable for anyone trying to get to work. I would imagine today would have been the day for people to work from home but of course that's not possible for everyone. I'm sure there was no love lost between the two leaders but by gum doesn't Putin always have a face like there's a bad smell in the room!

André came in yesterday and told me that when he was driving into town he started having trouble with his car seat - it wouldn't stay in the forward position - so he's not sure if he's going to have to make yet another appointment with Ford to get that sorted. He keeps pouring money into the bloody thing and every time we hope that this time that's it, but there always seems to be something new to fix. Admittedly his dad bought it in 2009 so it's not a new car. More to the point, this is the car that his dad went out drunk one Saturday afternoon and spent $60,000 on a brand new car for himself! Man was I pissed off (a) that he was drunk, and (b) that he spent that much money without as much as a "by your leave" to me, even though paying for the damn thing was going to come out of our joint account! At least that was one thing that I insisted he take on in the divorce settlement - reimbursement of his car loan. I mean, it's not like he looked after the damn thing or anything. In fact, about six years ago he had to have a completely new engine put in because he never bothered checking the oil and the engine just blew. So on that basis André bought the car off his dad when he left to go back to the States, and while it hasn't been a bad car as such, it does seem to be constantly haemorrhaging money at the moment. Hell, I told him to just attach a new car to the wing mirror and be done with it but I sense that didn't go down too well! Oh well, not my problem is it!

In other matters, yesterday I took a trip out to the large charity store near here and the first thing I saw as I walked in was a baby bouncy chair - for the grand sum of €6 (brand new they run between €60 and €70)! Talk about lucking out! I've dropped off stuff there before but never actually been in to buy anything. I can't say the place did anything for me, to be honest, but I reckon you could maybe get some halfway decent second-hand furniture if you were just starting out. I don't think I'll be going back again to buy though - I'd rather stick to vide-greniers - but it certainly was worth the trip, once I'd got back home and washed the cover. So now we have somewhere to plonk the babe when he's at my place all for the grand sum of €6!

I see that the British Embassy in Paris is also doing a big push to get expat Brits living in France to hurry up and request their residency permits before the cut off date of 30 June if they have not already done so. Beyond that date, any Brit either living or wanting to live in France will be subject to the more stringent rules that apply to third country nationals. I say hats off to them really because I find it hard to believe that people who live here can be that cut off from the reality of what's required for a Brit after Brexit. I suppose some older people might not be computer-literate, of course, but there have been groups set up to try to help these people do what they need to do in time, the Embassy has addressed letters to Mairies in France to bring this to their attention, and they are also taking out newspaper ads saying "hey, you've got two weeks left to do the necessary"! I suppose some will get caught out but it won't be for lack of trying to reach them!

Now that the good weather has finally arrived my garden has gone nuts. Trouble is, everything seems to flower at once for one magnificent burst of colour in June and then bam it's all gone again. Still, sitting in my garden at this time of year is just glorious! 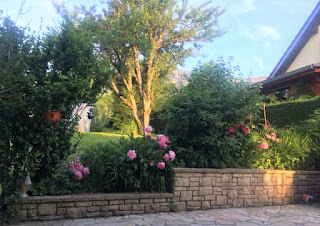 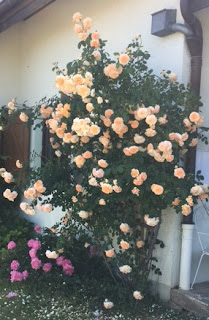 On the recommendation of a friend I have just finished a book called The Thursday Murder Club, which turned out to be a fun, easy read. It was written by Richard Osman of Pointless fame and it reads just like he speaks. He is, I think, the unintended "star" of the above-mentioned show, a self-deprecating man-giant who reminds me of Brains from Thunderbirds, except that he's probably twice Brains' height. So if you're looking for a simple read, you might like to give it a shot!

Yoga started up on Monday morning and I felt like I weighed 300 lbs and someone had put me in a body cast, that's how supple I was! I wasn't at all worried about covid because although 10 people are enrolled I figured half wouldn't show anyway - which turned out to be true because in the end there were just two of us, so again it was almost a private lesson. Yet again I came out of there feeling wonderful - it's so good to be back. Sylvie, the other yoga lady, told me that the older lady, Cami, from our Tuesday afternoon yoga lesson had died in January. Turns out it wasn't covid but more the fact that she was 90 years old and I guess it was just her time, but crikey, 90 years old and still throwing herself around a yoga mat with gay abandon! Well done Cami, you rocked it to the end girl! Then on Monday night I started up sewing club again. To be honest I could easily drop out of sewing because I'm not enjoying it but since I volunteered to take over as President I feel I need to put a few years in. And again there were only six of us in the large sewing room so no-one seemed to be overly bothered about covid. Then today I determined that I would head back to the gym, which has been closed for eight months and again, don't I know it! Admittedly I went with a bit of a petulant child attitude ("wah, wah, I don't want to do this") but again, I felt so good when I left there. It's a huge hangar-like building on two floors and, as on so many other occasions, there were just three of us upstairs using the weight machines. They also had one side door/wall completely open so there was plenty of air circulating so I wasn't too worried about being around other people. I bumped into Ben, my original trainer, who was the first person I knew that had contracted covid, so I asked him how it was. He said apart from being really tired and sleeping for about a week, it wasn't bad at all, so that's good to hear! I tell you what though, eight months of no or little exercise and those wall-to-wall mirrors do no-one any favours, especially not me!
And finally, when I got home from my Italian lesson tonight I see that the French Prime Minister has announced the ending of the curfew as from 21 June instead of 30 June because they are so pleased with the way the figures are going here! Wow, that's great! Also, as from Thursday (i.e. tomorrow) masks are no longer required outside for the most part, although they will still be mandatory in certain places, like outdoor markets and so on. Again, wow! I watched an interview with a French epidemiologist who was saying that the figures are so low for May and June as to justify significant easing of restrictions earlier than anticipated but, for the most part, that was down to the weather. He warned that the figures will most likely go back up again in September, in particular with the threat of the so-called Indian variant, but for the time being, it looks like freedom is on the horizon. I'll drink to that!
Posted by Treaders at 22:16