Did anyone see the amazing pictures coming out of Cairo yesterday where they were moving the sarcophaguses (sarcophagi?) of 22 Egyptian pharoahs to a new museum? They made a huge show out of moving the bodies of 18 kings and four queens to their new resting places and oh man, would I have loved to have seen that! Birmingham, where I grew up, had the most amazing library (goes with being a big city I guess) and what to me, as a young girl, was the most fabulous natural history museum. Before I got my Saturday job and was forever working, my mom used to let me catch the bus into town and wander round the city. I would go with my friend, Joy, with a whole 50 pence (I know!!!!), 16p of which would go for bus fares and we would spend the rest of the day wandering round the museum, the library and then on to Birmingham's Bull Ring market where we'd wander round the "rag market", take a few naff photos in a booth and then catch the bus back home. But the highlight of my day was always the natural history museum, and the ancient Egyptian section in particular. They had at least one complete mummy (that I remember - there may have been more) and displays of the jewels and barrettes that the ladies would wear in their hair and all I wanted to do was pick them up and handle them - which I wasn't allowed to do of course. That would be like taking a bone out of the T-rex exhibit's leg I guess! I know that part of the Cairo show was intended to generate interest in Egypt as a tourist destination, but I swear if I could have flown to Cairo yesterday I would have done! It's only a few hours' flight after all (damn the coronavirus)! 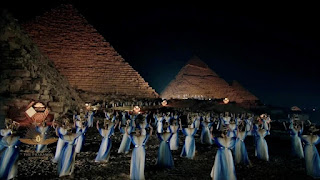 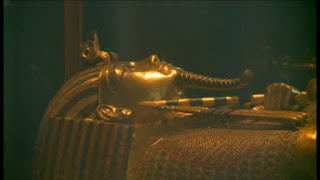 The other day I had a call from my friend, Marilyn, who wanted to know what she could send as a gift for the Munchkin. I've mentioned her before but Marilyn (American) was married to Philippe (French) and lived in the house opposite when we moved into the house where I still live. Times moved on, Philippe was head-hunted and they moved to the States where, sadly, he became seriously ill and eventually died. Marilyn's daughter is now married and working in London and Marilyn moved to Ireland with her son when he was transferred to Cork for his job. Her son is now married and has a step-daughter but it has long been all their ambitions to move back to France which, since Marilyn also holds French citizenship, should not be a problem for her. Well we spoke on the phone today and her daughter-in-law found out her transfer request to France has been approved and they are looking to rent in Annecy, where Marilyn and Philippe already owned an apartment which they rented out. So the good news is that Marilyn will be moving back to France, into her own apartment in Annecy, hopefully sometime in the summer. I am so looking forward to it as we have been friends for over 30 years. Circumstances separated us for a good many years but our friendship always remained solid. So I guess as soon as she moves back we will be careening round France like a geriatric Thelma and Louise (but without the yucky ending)! As long as we don't look in the mirror I guess we can pretend we're both still 30 again! I can't wait!

And the even better news is that Jordan just sent me a message to ask if they could leave the Munchkin with me for a few hours on Wednesday afternoon as they have a few appointments in town. I asked if he was out of nappies already but it turns out he might be a bit slow. André said to tell them no because he'll get no work done (he is even more gaga about that kid than I am), but yay me, he's only a week old and I'm already getting to babysit. Does life get any better than that? I don't think so!