Yeah, that's just what you'd do isn't it!

My immediate neighbours on either side are the "R" family, with whom I am very close, and the "S" family who, while not as close as the Rs, are still very nice and we have done things together socially in the past. One thing I've learned over the years, though, is if you want something spread all around the village, tell it to Mrs. S in confidence. So while I will always chat with her, if I want something to stay private I never mention it to her. Not that I have much that I'm desperate to keep private, mind you - I'm pretty much an open book - but not everyone feels the same way do they. Anyway, about a month after André moved in with me I spotted her in the garden and she asked what André was doing here so much. So I told her he was getting divorced (I figured she already knew, actually) and was going to be with me until he got his own place. Well a couple of days later I went to the market in the next village over and bumped into another neighbour who I don't see so often. She asked how I was coping during these never-ending lockdowns and I said it wasn't so bad as André was getting divorced and was living with me for the time being. That's when she said that she had already heard because Mrs. S had told her the day after she found out. Not that these two are friends at all, it's just that they had bumped into each other in town and got chatting. And this neighbour said how absolutely disgusted she was that this was the kind of tittle tattle that Mrs. S liked to gossip about. So I told her it was fine as it wasn't a secret anyway but she insisted that as she, herself, is a private person she thinks Mrs. S needs to keep her mouth shut about other people's business. But that was the end of the story as far as I was concerned. Well that is until I bumped into Mrs. S this week out walking the dog on her own. Now she never goes anywhere without Mr. S, never, because he is insanely and irrationally jealous. If she wants to have a coffee in town with a gf he goes along too. He goes to the market and shopping with her and they always walk the dog together. She told me this herself, many years ago, because he at one time figured she was having an affair with Mr. R (my neighbour on the other side) and then decided it was actually my husband she was having an affair with - and all because she used to wash the bed sheets on a Monday, so that must have been when she saw her lover! I know, it's crazy-making isn't it! But all that just to say that you never see one without the other - until yesterday that is. When I commented that she was on her own she told me that he had been taken to hospital on Monday after having what is, hopefully, a minor stroke but I was to keep it to myself in strictest confidence, as nobody was to know! She then told me that she'd been in such a state that she pulled out onto the main road into the path of another car and while she was okay, both her and the other car needed repairs. So I told her if she needed me to run her around just to let me know as I was free any time. She thanked me for the offer but again reiterated that no-one was to know about him being in hospital. And that's when it struck me. I wonder if she will ever see the irony between the fact that she feels free to tittle tattle about everyone else's business but when it comes to them, she expects everyone to respect their privacy! I, of course, will keep this to myself (I reckon everyone will find out eventually anyway - it just won't come from me), but somehow I still don't think this will change her!

When I went out to fetch the mail later that day I bumped into my other neighbour (Mr. R) returning from a short walk. He's been pretty good about walking lately after recovering from his third or fourth operation to put stents in his groin to open the veins up. I commented that I'd seen him out and about quite a bit and "good for him", and that's when he told me that this summer he intended to walk from the lac Vert up to the lac d'Anterne - and I nearly fell over! It's one thing to have a stroll round the neighbourhood every day but I think he is seriously deluding himself that that hike will be within his capabilities by this summer - if ever! He's smoked for over 50 years (hence the stents), and while he did get out walking when he was a much younger man, over the 30+ years that I've been here I've never seen him go out hiking once. But I would love to do that hike so I told him if he was game for it I'd go with him. I don't see it happening, to be honest, but I would like to have a shot at it (again), despite the fact that it is rated as "hard" on the local hiking review. I've been up to a refuge called le Réfuge de Moëde before, and the lac d'Anterne is a good 90-minute hike above that, but who knows. It's spectacular scenery and maybe I can persuade Isabelle and/or my other neighbour to have a shot at part of that hike with me (the bit that I know) once the snow has melted! 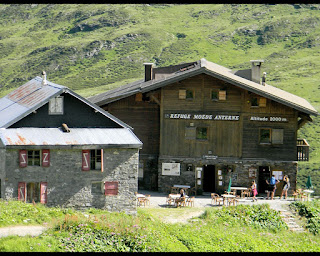 I've been doing pretty well lately at sticking to my one-hour-a-day schedule for getting things sorted/cleaned/decluttered, but there's obviously still an awful lot to do - not that there's a deadline of course. Still it's nice to see things slowly starting to take shape. Today I got all the bed linen washed and hung outside to dry for the first time this year. It wasn't warm enough to dry completely, of course - not yet - but doesn't everything smell wonderful when you bring it in from outside! After that I thought I'd give my sister a call as I haven't spoken to her in a couple of weeks, but blow me, what had she done to her hair? They're still in lockdown in England and she was explaining that the hairdressers are still out of bounds and will remain so for a good while yet. So as she was totally sick of her hair she'd taken her almost-bald husband's hair clippers to her head and ran them all over. Crikey, she definitely went a bit nuts! I doubt her hair is half an inch all over, but while she'll never win any prizes for Home Hairdresser of the Year, by god she could give sheep shearers a run for their money! 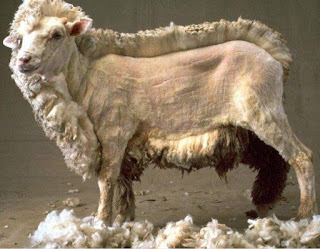 And finally, as I was watching the French news on Youtube yesterday, some abstract algorithm decided that I might be interested in deleted scenes from the film Love Actually - and lordy were they right! The one I watched involved "mom" (played by the wonderful Emma Thompson) being summoned to her son's school over "an incident". It turned out that the children had been asked to write an essay describing what they would wish for if they had a magic wand and could wish for anything for just one day. Well most of the kids wished for world peace, of course, and one child wished that his sick sister would be healthy for just one day. But not Emma Thompson's son of course. They made her read it out loud in front of him. No, her boy wished that just for one day, whenever someone farted, little bubbles would start floating up around them so that everyone would know who it was. They showed grandma at Christmas lunch with the little bubbles, the vicar giving his sermon in church with little bubbles and then - oh heresy - the Queen bending over to pat one of the corgis with little bubbles all around her! 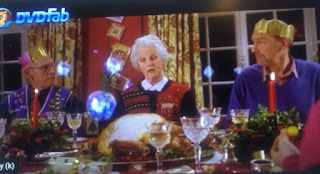 At this point Emma Thompson asks if she can speak to her son in private and they leave the Headmaster's office. When her son says "sorry mom", she turns round to him and says "no, I'm sorry. I'm sorry for putting you in a school with a bunch of pricks who can't see your story for the comedic gold that it is" - and then she completely cracks up. And that's when André said "yeah, that's just what you'd have done too isn't it" - and you know what, he's right - 'cos I'm a pleb!