The square root of bugger all ...

… is what I did on Boxing Day. I think I literally sat on the sofa all day flicking between books, the computer, and the TV. It was so bad I think my backside is now square and flat!! But you know what, it was very nice! It's not something I would want to do often but very occasionally I suspect that might be a real treat. Actually, I'm just sitting here with an old, unused 2018 diary making lists of all the things that need to be done or that I want to do. The nice thing is I can tick a few things off each day from here on in and they will all get done - although not necessarily any time soon.

One thing I did do though was cancel my automatic toll contract. Since I was using a toll road every day, twice a day to go to work and back, I had a contract with the toll company to the tune of €55-€60 a month (I can't remember exactly) which got me a reduced rate on the toll that I used the most and then standard rate on any other tolls. I had a badge on my windscreen and could just go through without stopping (as long as it was only around 30 km an hour) and the monthly bill was debited automatically. Well this was one of the first things I wanted to cancel since I don't want to be paying €60 a month for something I don't need any more. So yesterday a friend and I went out there to cancel our contracts and set up a pay-as-you-go contract, which only costs €1.90/month for the automatic badge if you use it, plus standard toll fees, and nothing at all if you don't use it. The "telebadge" is very convenient so I wanted to keep it if possible but, as I say, not at the cost of €60/month. No problem, everything was sorted in about 10 minutes and I will now be that much better off each month.  My poor friend retired in August 2016 and hadn't given it any thought so she has indeed been paying €60/month since then while using probably only about €10/month in tolls so she, at last, cancelled that too. Kids today!!! Whatever can you do with them!

On the way back I wanted to stop in the next little town from us to check out their swimming pool (or nautical centre as they call it). Our local town only has an outdoor pool (unless they've built an indoor one since I was last there 20 years ago) so I have this vague idea (very vague actually) that I might start going swimming once a week. When I say "vague" the thought of me in a swim suit and swimming hat is probably enough to kill that idea before it even gets off the ground but we'll see. Again, as I say, my idea is to try to do some kind of activity, if not every day, but most days, so I'm trying to gear myself up to that. I already have a 90 minute yoga class to check out on a Tuesday afternoon in the next little village to me as that is one of the things I want to take up again, and a hiking group, but I also don't want to commit to too many activities until I get a feel for how this "retirement thingy" actually feels. Right now, all I can say is that it feels like I have a huuuuuggggeee weight of traffic jams lifted off my shoulders already!

In other news Christmas day was very nice, spent with my kids and their partners and a friend. I actually didn't stress about this one - it's probably psychological because I know in the future I won't have to get everything done in one mad rush at the end of the work year. I cooked pork this year and actually set it off in the slow cooker at 1 a.m. since I was up anyway and it worked out perfectly. I made a gratin since I love it (to hell with the others) and other stuff and at the last minute thought I would have a shot at making yorkshire pudding for my youngest as he loves it. I do too but I have never been able to get the timings right since they need to be in a really hot oven and then trying to keep everything else hot is what always throws me. They didn't turn out too bad this time (well they all went) and my eldest basically took a second entire Christmas dinner home with him as leftovers. For once I didn't make desert as my friend always brings cookies or mini pies and they went down really well too. 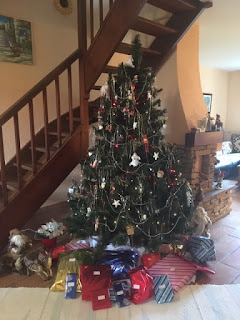 I think I mentioned in a previous post that I had bought morph piggyback suits for my sons for Christmas, well they loved them, and since I already had one for myself we did a fashion parade. The photos didn't come out very well but they were really funny, particularly on my sons because they are taller and the suits looked better! 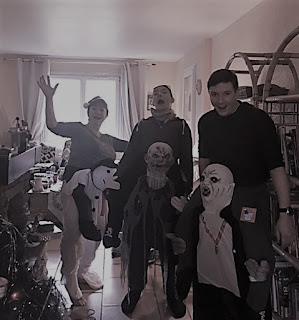 Since my youngest and his fiancée already play in our board game evenings I invited my oldest and his wife to our next evening, which is on 12 January at my house and they said they are going to come. So with that in mind, we got out a game called "Time's Up" and played that for a while, as well as "guess who I am" (not sure what the real name for that game is) and it was good fun. 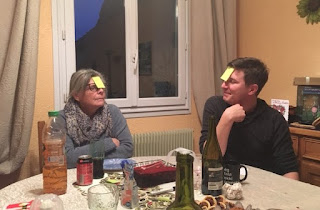 A little later the daughter from next door came round with her (relatively) new English boyfriend. He was a good sport and joined in easily so I wonder if they will join our group. It's always nice to have new blood, although to be honest there are sometimes difficulties with the different cultures/languages. Obviously most of these games are French and sometimes I will have no clue what I am supposed to be "guessing" since I don't even have French television. OK if you have to guess "Harrison Ford" that might be easier but some of the French celebrities just go straight over my head. Lily is Swiss so I had her guessing the name of a local Swiss politician who would seem to be as "morally bankrupt" as it is possible to be. Some very, very dubious expense accounting going on there and the local Geneva population are trying to get him out. He, like most of them, is clinging on by his finger nails. None of the others had a clue who I was talking about but as soon as I gave Lily a few clues she got it. So like I say it isn't always easy given the different nationalities involved but it is fun, although I wonder if next time, if we are about 14 or so, maybe we should split into a couple of groups and play cards. With that evening in mind, I have beef braising in my slow cooker at the moment as I want to try out a "French dip sandwich" idea which, if I like it (we used to like this kind of thing before but made slightly differently), I will make a bunch of them as my contribution to "dinner".

So on that note, I'm looking forward to a quiet New Year's eve. I don't particularly like to go out on NYE and I certainly don't want to be on the roads so I will snuggle up on the sofa and try to stay awake till 1 a.m. here to watch the fireworks in the UK. I don't always make it but ….

And finally, thank you to those ladies who sent me Christmas cards in the Christmas card swap organized by Anne (New Happenings). Seeing your cards, though, does make me realize how appalling my handwriting is as yours was so lovely. Now in my defence I left this till the last minute and was trying to get all my Christmas cards mailed from work on my last day so there was a tequila-sodden "leaving party" going on behind me in my office. Not that I think my handwriting would have improved much without it but that's my excuse and I'm sticking with it.

Cheers to you all and have a happy new year's if you are celebrating!