I guess I shouldn't be bragging but I actually went out walking again today so that's 2 for 2!!!! Only another 363 times and I will  have a complete year of exercising! Ha! But seriously, the weather is so glorious at the moment - like early spring in fact - that I decided to set out once again around noon to do another short walk near my home. This time it took me an hour and I clocked up 5,300 steps so an improvement over yesterday. There is another, similar, walk to this one that I might venture out on tomorrow called the Bois de Fournet and that will certainly clock up a few more steps. I was a bit apprehensive as these walks go through some local woods where in previous years there have been tents and so on - obviously either a homeless camp or (more likely, according to the neighbours) a druggie set up, but either way it was broad daylight and there was nothing there when I went through. It's kinda sad though isn't it that, particularly as a woman, you have to be aware of your surroundings like that!

Anyway, I set off around noon and decided to take a few pictures as I went. I mentioned in a previous post my Nigerian friend, Stan, who used to have a little bar near the railway lines. That is now over as Stan has retired but he hasn't gotten around to getting rid of the "portacafé" yet. Stan's place has been sorely missed though as there is only one restaurant in the village which, while very good, is not open all that often and it doesn't have the same feel as Stan's place. Apparently they are going to build a café/bar in the village "sometime" but when that will be who knows!


As I got near to Stan's place I saw that they had set up the "roving still" to make "alcohol de noix" or walnut alcohol (eau de vie I guess). They come around just once a year, collect the walnuts and then produce and sell their eau de vie locally. I believe, sadly, it's a dying tradition because, if I remember right, this tradition can no longer be passed on from father to son so will die out soon enough. I hope I'm wrong as it would be a shame to lose this skill (and the booze)!

As I walked on further past Stan's I turned around as the clouds parted and (hopefully) got a really pretty view of our village! 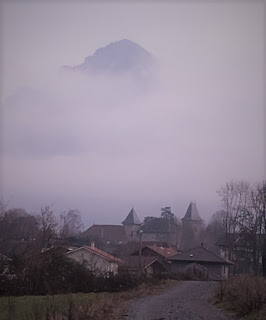 From there I walked on through the woods to the Bénite Fontaine church (the church of the blessed fountain) where there is a spring water fountain where people come and fill up their bottles with "holy" water (a bit like Lourdes I guess, or at the very least like Evian which, while not holy, is renowned spring water). Actually the little area where I live is called "Les Champs de Chant" or fields of song in English. Originally I thought it must be because of the bird song but in fact it is because there are so many underground mountain springs that they "sing" as they run through the fields! Either way, our tap water is untreated, which means we can't sell it on to the local town when we have an excess, but which also means that we have beautifully sweet, untreated tap water!

After that I headed back towards home. I think the entrance to our village is really pretty but have never been able to get a decent picture of it because I can't exactly slam my brakes on and stop the car in the middle of the road. This time, however, I was on foot so decided to take a few pictures as the weather was perfect. They were only taken on my phone but they're not bad are they! 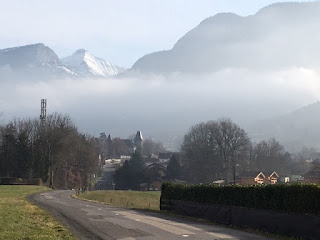 So yep, that's two for two so far in the exercise campaign! But we'll see how the rest of the year goes though won't we!

In other news, I don't think the book I read was called "Eat the Frog" but the principle of "eating the frog" was enshrined in there somewhere. Basically it means if the worst thing you have to do at any given time is eat a live frog (not a dead one - that would be too easy here in France) then do that first and everything after that will seem easy. And it's true! How many of us keep putting off the "hard" stuff because we can't be bothered with the hassle!  Well that was true for me so I determined that today's frog would be to get my bloody visa for my trip to Sri Lanka in March! I had already tried numerous times and their damn site kept crashing so I thought rather than get riled up, leave it a few days and make that the frog for today. And guess what, it's done! I have no idea why it went through this time but I seem to have learned that it's better to walk away when I get frustrated and come back to it another day! I also sent off an email to the travel agents asking them to book my transfers to and from Colombo airport since I will be making my own way to Sri Lanka direct from Switzerland rather than flying back to the UK in order to fly out again.

And finally, sometimes I think if I had half a brain I would be dangerous! Frog number two for today was "get the bloody dead light bulbs changed"! In my TV area I have eight inset lights, two of which had blown and then a third went last week! But changing these light bulbs meant dragging heavy stepladders up and fiddling about with inset lighting. So I decided I would do just one today. That's all! So I hauled the stepladders upstairs and set about pulling the light fitting down (after turning off the electricity of course) and within five minutes it was changed! No sweating, no swearing, no hassle! But then, when I looked at the other two "dead" light bulbs it occurred to me that they weren't dead at all, they were just on another switch! Hence the expression "if I had half a brain I would be dangerous"! You live and learn I guess!