Thursday and Friday of last week were public holidays for us in Geneva - the last until Christmas so it is in your best interests to enjoy this break! And wouldn't you know, Thursday being the official holiday, it decided to rain - after days and days of glorious sunshine. That's not to say it stopped what seemed to be the entire population of Geneva from getting out and about though - Thursday seems to be the day that all of Geneva says "hey, it's a holiday and the French are still working so how about we pop down to Annecy and enjoy the lake" - so that's how you end up meeting half your colleagues in Annecy on the Thursday of Jeûne Genevois! Not that I'm complaining though, as I decided I wasn't going to do anything that day, or more to the point, I had an appointment with the French tax accountant to see how my calculations matched up against his figures with a view to retiring at Christmas. Well I have to say my figures were spot on with one major exception!!! Pension - check, tax calculation - check, but oh the lump sum!!!! Now I had calculated a 7.5% tax on the lump sum - which is correct - but in addition there is an obscure, newish tax that I was afraid of - the CGS - which is applicable in addition to the 7.5% tax that I had calculated and bugger me if it doesn't bring my tax bill on the lump sum to almost 21%!!!! That was a shock I can tell you. I had wanted to take €132,000 to pay off my house, put in a new heating system and re-do the bathrooms and so on and have a little left over just in case. Well out of that €132,000 the French tax man wants to take just over €30,000 so I have to admit I went a bit weak and wobbly at the knees. The very nice tax accountant said it would be madness to pay that and suggested instead that I refinance the remainder of the outstanding mortgage back to its original expiry date of 10 years from now, take a full pension and continue to pay the mortgage. Ooooooorrrrr, why not do another 15 months at work, pay the mortgage off totally and live like a queen! I could have cried - I really have my heart set on going at Christmas so once I had picked myself up off the floor I started running through my options. In any case I have an appointment at the bank this Saturday and will see what she suggests but if it can't be sorted to my satisfaction I think I might just bite the bullet, pay the (daylight robbery) tax and live relatively well on what's left. We'll see by next week I guess but yikes, really yikes!!

Theeeeeennnnn on Saturday I had a call from Steve in the U.K. In a previous post I mentioned how we had planned to go out one day but ended up not being able to as he had an appointment come through for a scan at Liverpool hospital, so I ended up spending the afternoon at the hospital reading while waiting about four hours for him to get done with his scan. Anyway, the last time I spoke to him he hadn't had his results but by this Saturday he had already been on chemo for a week!!!! Yep, without going into too much personal detail he is being treated for cancer and will continue to do so probably up until Christmas!!! I had thought he wasn't his usual madcap self when I was there in August so I guess having that niggle on his mind was what was behind it! From what I have heard it is a very treatable cancer assuming they caught it in time - a bit like prostate cancer, I guess, although it's not that. But to say he was shell-shocked is an understatement. And to my mind this is another reason to go ahead and retire at Christmas rather than wait until "things get better". What with Ian dying in May and then my friend Penny dying in July (both unexpected) I'm thinking "oh for God's sake go, what are you waiting for". Now don't get me wrong, I have every belief, sincerely, that Steve will be fine, but it's not me facing the treatment it's him, so I just wish I could transfuse some of my positivity and ship it over to him. Not to say he isn't positive - he is - but it was a hard blow to assume out of the blue! Fingers and toes (and anything else you can think of) crossed!

I didn't do much for the rest of the weekend - which annoyed me in the end because after Thursday we had such glorious weather, so on Sunday I decided that I would trot up to my son's place as I had some paperwork for him and find out how his first week had gone at his new job! It looks to be great! He is working for a fairly large company (indeed they are looking to recruit even more plumbers) and he already has his works' van, his works' mobile phone, credit card and iPad which he just "taps" and it sets out his next job and what the potential diagnostic is. He is being shadowed for his second week by a senior guy and then next week there will be two rookies together to see how they get on. It is only 10 minutes from home and is already waaaaayyy less physically demanding than his previous job for about the same money! The biggest thing that seemed to excite him was his daily lunch allowance of up to €18 per lunch whereby he pays for his lunch, takes a photo of the bill and sends it by iPad to the main office who will reimburse him! Pretty cool eh! I genuinely didn't think he would be unemployed for long (one month in total but he managed to get some temporary work in there) and there really is no such thing as an unemployed plumber is there, but I have to say I think we were all relieved when he signed his new contract!

Anyway, as we were leaving I asked if he could suggest any local spots where D and I might get up the mountains for a bit of sun (not that it's not sunny "down here"). We have all the usual beauty spots where we routinely take visitors of course but given what a stunning area we live in I wanted to try somewhere else - and boy did we strike it lucky again. About 30 minutes from home is a place called Agy where there is great hiking in the summer and cross-country and Nordic skiing in the winter. There was loads of parking at the little restaurant so D and I decided to treat ourselves to lunch before hiking the short distance to the top for what is apparently a panoramic view of the Mont Blanc.  Exceeeeept, dingbat here had put her hiking shoes by the front door, loaded up the rest of her stuff and promptly set off to her son's in her flip-flops, completely forgetting about the hiking boots by the front door. So I ended up looking like the proverbial tourist trotting off up the mountains in my flip-flops! And true to form, about 10 minutes from the top, my flip-flops broke and I couldn't go any further!!!!! D went on ahead for a while but decided to turn back and watch me hobble back to the parking lot like the Hunchback of Notre Dame!!  Oh well, maybe this Sunday. 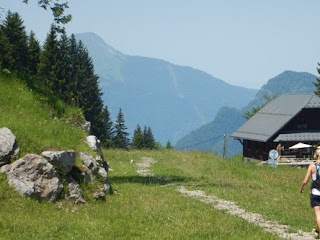 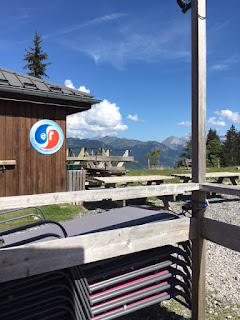 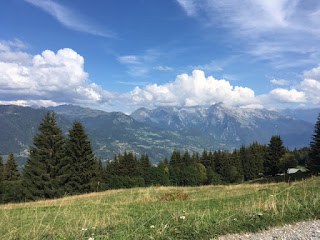 And finally, just before lunch today I bumped into V - a lovely German colleague. She had had her hair cut and coloured and I remarked how much it suited her. She said that she had had it cut at the hairdresser's but that she had coloured it herself. Trouble was, when she was shaking the bottle of colour with the setting solution to get it properly mixed she had been a bit too "enthusiastic", did a weird movement and had hurt her back - said back having been hurting all over the long weekend! Now frankly, (a) she is German so I guess you have to expect that kind of "enthusiasm" but (b) I told her if it had been me I would have said it happened while I was in training for my next extreme sports event! I mean, how do you hurt your back colouring your hair? Beats me!