Oh sometimes I hate being a Libran! Really, seriously! Whenever I have major decisions to make I go over and over them endlessly until I am comfortable with my decision and then go for it. Buuuuutttt, to put a spanner in my future plans I know my immediate supervisor is very very upset about my wanting to retire and two days ago he called me in to his office and said for me to tell him exactly what it would take for me to stay a little longer and he will go up to bat against the Director to get it for me!!! Crikey! And oh bugger! After so many years working together my supervisor, P, trusts me and my colleague totally when it comes to getting the work done. Additionally P is going through a rough patch right now so if ever there was poor timing for me to go (from his point of view) it is now!  A couple of years ago I asked W, the Director, if I could work 80% or telecommute because my 3+ hour daily commute (on a good day) is killing me. He said no. He is totally, totally against either and said that while some people already work part-time or telecommute that was accorded to them during the time of the previous director and he didn't want to "go there". Don't get me wrong, W is a very nice person but you can tell that he has never had to dash off to the day-care by 6 p.m., never had to race around grocery shopping in his lunch hour and never had to worry about feeding and bathing the kids in the evening so I think it is totally unfair (not to mention archaic) of him to be so dogmatic. Anyway, P told me to name what I wanted and he was prepared to go see W and throw a hissy fit (he will too) to get me what I ask for. Oh bloody hell!

I told P that I had already had my appointment with the tax guy and that on Saturday I have an appointment with the bank and that I would let him know on Monday what I wanted to do, if anything. So I gave it a lot of thought and initially thought maybe working from home on Mondays and Tuesdays, but then thought no, if I am going to telecommute it would make my life much easier to work from home five mornings a week then come in to work from lunchtime onwards. Yesterday I had a cardiologist's appointment so left home later and instead of the usual 45 minutes to one hour to get to the border it took me 20 minutes!  All that stress for the sake of trying to get in to work on time!

But then I got to thinking that it wasn't up to P to go in to the Director and start banging the table, it was for me to ask for what I wanted and take it from there. So yesterday I drafted a very good (in my opinion) memo to the Director requesting 50% telecommuting, quoting the relevant company policy which very strongly encourages this and asking for equivalent treatment to my colleagues who already benefit from this arrangement. I haven't sent it yet as I want to wait until Monday, but I wanted to put it in writing (as I write better than I speak) and so that he has to answer me in writing and then I (and P) can take it further if need be. The fact that probably 30% of the staff in HR telecommute just adds fuel to my fire. I honestly don't know what the director will say as I think I may be boxing him in to a corner but we'll see.  I know for a fact that there will shortly be a directors' meeting where the "big boss" will be making it quite clear that this is the way he wishes to go forward. I also know that our medical service have been questioning our staff about directors' attitudes to these requests so who knows.  As I say, W is a nice guy but in this respect I believe he is totally in the wrong. Just my opinion though! Watch out for the fireworks next week!

I think I mentioned previously that I have been scheduling various medical check-ups in the run up to retirement as I have been putting a few of them off for too long. In the past month or so I had been feeling discomfort in my chest and jaw and know that this can be a symptom of heart problems as my dad had many heart attacks. I am convinced it is stress-related linked to my commute but made an appointment to see a cardiologist yesterday and oh the shame! Said cardiologist is drop-dead gorgeous as far as I am concerned so picture me topless, with wires attached all over my torso pedaling away on a stress-test bicycle with my boobs resting on my knees and Dr. Gorgeous standing next to me talking about Brexit! Oh la honte as they say over here (oh the shame). Now I know he is used to this but me .... what we women have to go through eh. On top of that I have the gynae on Monday so more of the same I expect. Anyway, Dr. Gorgeous told me that my heart was fine but since my dad had his first heart attack at the age of 48 I was classed as "at risk" for hereditary heart disease so I have to go for a scan next Wednesday when the results of my blood tests are in. This will be to test for cholesterol and related blockages in the arteries, just in case. I'm happy to be doing it anyway and I can only thank the powers that be that I have wonderful medical insurance and it is all covered!

And finally, I wanted to make a "get well soon" card for Steve, in view of his recent shock diagnosis, so I printed off the picture below and sent it to him in the form of a card. Thankfully he has the same sense of humour as I do so took it in good part. So far he is doing well and says he is feeling "normal" - I told him to dash off to the doctor's quick as he wasn't "normal" beforehand! Long may it last in any case. Fingers crossed! 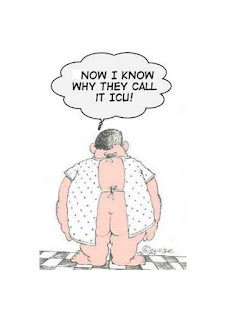