I've been missing in action for a little while as I'm frantically busy at work and I think my computer is also on the blink as it has been pretty painful trying to log on here.

So what's been happening? Well the other Saturday night two friends and I went to see Simply Theatre's "The Best". This is the theatre group made up of youngsters studying the performing arts. They are aged 18 and under and do a wonderful job. I have no idea where they get their confidence from  because I could never do what they do even assuming I had half the talent - which I don't! While it wasn't my favourite (that accolade still goes to their performance of the Addams Family) it was still very good. It was a show which incorporated some of the best songs from hit shows but I think where it fell a little flat for me was that they weren't my favourites! Talk about picky! But I mean, if you talk about the Rocky Horror Show it's got to be the Time Warp Dance hasn't it. Still, as I say, they were excellent and the young girls that sang Evita's "Don't Cry For Me Argentina" and "Memory" from Cats really pulled it off. A couple of the young men had incredibly good voices too, although I did find the one "sexy" performance by two young lads a bit uncomfortable - I mean, you really can't do "sexy" when you haven't even hit puberty can you! Still that's not a criticism of their performances, they were great, it's just maybe the choice of song that I thought odd! 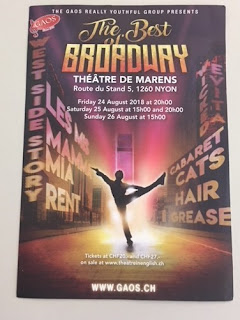 Then last Saturday we had our "monthly" board game evening, which was again at my place. Since I was the first person to host this we have obviously come full circle already! We ended up being only 10 as a few people were still away but gosh what a noise we made. Jen had bought along a new game where you picked two cards and had to mime the "afflictions" that were indicated on them - for instance every time Valerie spoke she had to do it like she was speaking to her lover, stroking his cheek with a squishy voice and all that. Trouble was she was doing that to Isabelle's husband, Philippe. Philippe had to be Valerie's "imaginary friend" who she had to get to say a certain word. Difficult to describe I suppose but it was hilarious, particularly the more wine we drank (I wonder why that was?)!!!! Our next evening will be held at Valerie's because she lives at over 1,000 metres altitude and we wanted to make it to her place before the snows hit. Our group does seem to be growing in popularity somewhat as Jen asked if she could bring a friend (obviously not a problem as it was at my place) but then on the Sunday I dropped in at my oldest son's place to give him his birthday presents and they asked if they could join! Little buggers, they had been included in the initial invite over a year ago and never responded. Still, if they want to come I'm hardly going to say no am I and it is a great way to see my kids! At that point we might be 18 which I think is pretty much the limit to entertain in someone's house but we'll see how it goes.

Talking of André and Lily they came back from Sicily (which is where I'm going in two weeks' time for my birthday) and in a couple of weeks are heading back out to the American "west". Not quite sure what their itinerary is but they are going to be covering a helluva lot of miles, but then they both love it. All I know is that Lily is organizing it all and that they will be landing in Denver, heading for their "main attraction" of Utah and leaving from San Francisco. She has all the places they want to visit mapped out (which in their case includes hiking up to eight hours a day) but they do indeed have some wonderful photos from their last visit in March. Do it while you can afford it and before the little 'uns come along is all I can say!

And talking of my birthday (we were weren't we), I have decided to line up a few doctors' appointments to get a complete check-up before I retire. When I called the cardiologist's I explained to the receptionist that I was already a patient but had changed my name. When she asked me to confirm my date of birth I said 24 September 1958 and she said "oh, so the big one's coming up isn't it"! I told her not to remind me but she assured me that it would have been fine (for her) if the following week she hadn't received advertising for funeral expenses and incontinence pads! Ain't that the truth! When I hit 50 all of a sudden the advertising coming my way was no longer for push-up bras and stockings but support socks and adult diapers!!! So I asked her if she had received any magazines giving out free 1950s knitting patterns yet but when she said not I told her I would bring her some on the day of my appointment! The "sad" thing is, I wouldn't mind taking up knitting when I retire! Still she was a very friendly receptionist and she kinda made my day!

And yet again talking of being an "old fogie", yesterday I bumped into a lovely colleague who I hadn't seen for quite some time. He was the lovely guy who took me out dancing after my husband left me. It was a Thursday night, I couldn't dance for toffee but we danced until four in the morning. When I told him I was on my knees but that I would seem him later at work he just said "oh, I took the day off"!!! So 30 years after the last time I pulled such a stunt I ended up pulling an all-nighter! I can't believe I ever used to do that on a regular basis. Anyway, I hadn't been able to catch a coffee with Jean (he is French/Lebanese) in ages as someone always ended up cancelling - so he asked if I wanted to have a "quickie" next week, "you know about 30 minutes". I burst out laughing and said "hey in my book that would be more of a marathon than a quickie but why not. Anything has got to be better than three pumps and a slump! His English is excellent but I'm not sure he actually knew what a "quickie" was! I guess I'll have to meet him for coffee next week and explain, just in case. Oh dear, what a let down. He only meant coffee!

Anyway, Thursday and Friday are public holidays here in Geneva so I will enjoy my last long weekend before the Christmas break. Yikes, fancy talking about Christmas already - how depressing!
Posted by Treaders at 14:50