Back in the saddle!

I got back from England on Saturday afternoon after just a week away to see family and Steve, my friend "up north". It was a pretty quiet week actually but I don't mind as, to be honest, I don't go to England for the scenery or the weather (which is just as well eh)!

Before I left home I made sure to empty the bins, turn the water heater off and so on and finally got round to throwing away a loaf of sliced bread that I had had for ages! I know that sounds an odd thing to say but I rarely eat sliced bread and must have bought this loaf, oh, about five months ago. I noticed that it didn't seem to be going off so decided that I was going to keep it until ... well until it just walked out the door of its own accord I suppose. You see, I don't know if you have heard stories about how "dead bodies are now so full of preservatives that they are no longer decaying"! Well I was intrigued by this idea, but given the amount of chemical preservatives in our food I wouldn't be at all surprised. So I decided to keep the bread and just keep checking it out from time to time. I swear, five months later that sucker was just beginning to get a few "mites" inside the packaging (I kept it well wrapped up of course)! But seriously, how on earth can you keep "fresh" bread for five months without it going off. It makes you think doesn't it!

Anyway, back to the plot. I flew into London on Saturday then caught the bus up to Dorset to spend a couple of days with my sister and her family. It was nice and relaxing, we did a bit of shopping (oh my God the prices!!!) and also got together with her daughter and grandchildren. Talking of prices, I hadn't had my eyes checked for three years and knew that I needed new glasses but didn't think I would have enough time to get that done in the two full days I was in Dorset - but not a bit of it! My neighbour told me that she had just paid €750 for one pair of glasses!!!!! and while I have insurance I really didn't feel like paying those kinds of ridiculous prices when I could get them so much cheaper in the U.K. The good news (for me at least) was that I was able to make an appointment for the Sunday after I got there - try that over here in France! Ha, what a joke - and then pick them up 24 hours later! The eye exam cost me just £25 (as compared to about £200 equivalent the last time I went to the optician in Switzerland) and two pairs of glasses took me about seven minutes to select (as I really don't care that much) and cost me just £89!!! Wow. On top of that I will get 90% back through my medical insurance anyway, so as my sister said, it was worth flying to England for that alone!!!!  Let's hope Brexit doesn't knock the stuffing out of those prices, but sadly I fear it probably will!

On the Tuesday I caught the train to Southampton and then flew up to Manchester to spend a few days with Steve, and you know what, we didn't do an awful lot but it was very nice. Just chilling, lazing around reading and then going out for dinner and so on. We had been invited to a friend of his for dinner the one night but Steve finally got a hospital appointment at Liverpool Hospital the same day so we had to cancel, fearing that we would be late getting back. So while he was in for his scan I spent a few hours in and around Liverpool, but mainly just sitting in the hospital waiting room reading another hilarious book by John O'Farrell - Things Can Only Get Better - or eighteen miserable years in the life of a labour supporter! It is great. It's a factual book about  his younger years in the Labour Party but since John is a comedy writer it is also very, very funny. I think I'm going to send it to my nephew as he is a "rampant" Labour Party supporter and actually works in the Labour Party archives in Manchester! A good read if you are a Brit!

Anyway, we did manage to get up off the sofa long enough to go to the Southport Flower Show, and very good it was too. Just my kind of thing, in fact, as I loved the flowers, the garden ornaments and so on, but especially the displays of hydroponics (or is that "aquaponics" - I think that may be French). Absolutely fascinating stuff (to me). The flowers were stunningly beautiful of course, and it was quite moving to see the rose developed in honour of Saffie Roussos, the youngest victim of the Manchester Ariana Grande concert! 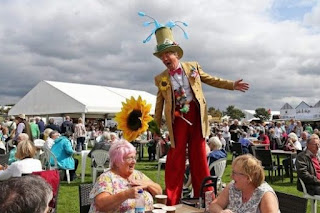 After a while we drifted over to a small "arena" to watch a display of sheepdog training. I have a soft spot for border collies as we had a "border collie mutt" when I was growing up, and boy are they intelligent. Anyway, with Cornish pastie in one hand and a beer in the other we made our way over to the "arena" to stand and watch in the rain - boy we know how to live it up don't we! We were just looking for somewhere to sit (there were plenty of spaces actually) when I felt a whack in my back and turned round to see an old biddy in a wheelchair waving her walking stick at me and mumbling black magic!!! Seriously, we hadn't even stood still for oh, what, five seconds and I got whacked in the back. The woman I took to be her daughter was mortified, Steve was furious but I just burst out laughing. I figure we'll all be old crones one day and in any case it must suck to be her!

Since the weather wasn't great, we also decided to visit some show homes on the latest housing development just behind Steve's place. Actually they weren't bad at all. We made out I was retiring at Christmas (true) and moving back to England (not true) and so we got to look around a 2-bedroomed apartment and a 3-bedroomed house. They were small - particularly compared to the amount of space I have here in France - but they were nice! Big enough for one person certainly, and after the prices down in Dorset I just could not believe how cheap they were! I don't really know the north of England (well not much north of the Lake District anyway) but by golly you get more bang for your buck up north! I'm not sure Steve would like me moving quite so close (I assured him I wasn't even considering it) but even he enjoyed looking around as his daughter is trying (and as yet, failing) to sell her apartment in order to buy something with her partner, so it was interesting for him to see what was available.

Anyway, all good things must come to an end and I had a seamless journey back to a very warm and beautiful Switzerland/France. Got caught up on all the washing and grocery shopping and am "hot to trot" as they say and hoping to get caught up with my blog reading. But oh, I must finish with the joke that won the top spot at the Edinburgh Fringe:

"Working in a job centre must be so stressful. I mean, if you get fired for whatever reason you still have to go back the next day"!  Subtle right!